“We should at least consider no tariffs, no barriers — scrapping all of it,” Trump said, according to officials who were listening and taking notes.

Trump floated the idea — which was received as somewhat rhetorical — as the meeting was breaking up and was quickly challenged by Canadian Prime Minister Justin Trudeau, who asked, “What about subsidies?”
https://www.politico.eu/article/trumps-surprise-g7-pitch-we-should-at-least-consider-no-tariffs-steel-aluminum-trade/

"No tariffs, no barriers, that's the way it should be — and no subsidies," the president said at a press conference, before taking questions.

"We don't want to pay anything — why should we pay?" Trump said. "Ultimately, that's what you want. You want a tariff free, no barriers and you want no subsidies."
https://www.cnbc.com/2018/06/09/trump-says-at-g-7-summit-trade-should-be-tariff-free-barrier-free-subsidy-free.html

“No tariffs, no barriers, that’s the way it should be, and no subsidies,” Trump said during a 30-minute press conference on the sidelines of the meeting in La Malbaie, Quebec. "I did suggest it and people were -- I guess they’re going to go back to the drawing board and check it out."
https://www.bloomberg.com/news/articles/2018-06-09/trump-turns-tables-on-g-7-allies-with-free-trade-proclamation

“No tariffs, no barriers — that’s the way it should be. And no subsidies,” Mr Trump said at a brief press conference before departing from the G7 summit at the Québec resort town of La Malbaie. “We’re like the piggy bank that everybody’s robbing, it’s got to end.”
https://www.ft.com/content/ba0aa2c4-6bf6-11e8-92d3-6c13e5c92914

"Also on Friday, Trump floated the idea of ending all tariffs and trade barriers between the US and its allies - a pitch that wasn't exactly expected, according to Politico. Trump offered the proposal at the end of a "contentious" meeting on trade disputes. Most G-7 members remain furious with Trump over his decision to impose tariffs on aluminum and steel imports, and his threats to impose more trade restrictions. Merkel responded positively to Trump's suggestion, saying she would consider it."
https://www.zerohedge.com/news/2018-06-09/trump-g-7-closing-remarks-were-piggy-bank-everybodys-robbing 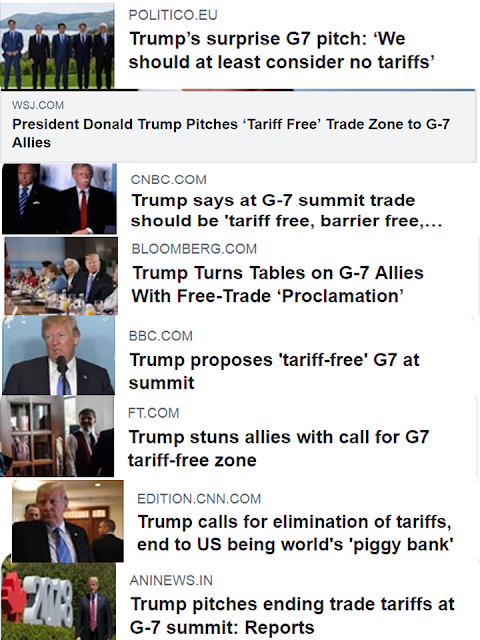 Please tell Prime Minister Trudeau and President Macron that they are charging the U.S. massive tariffs and create non-monetary barriers. The EU trade surplus with the U.S. is $151 Billion, and Canada keeps our farmers and others out. Look forward to seeing them tomorrow.

Prime Minister Trudeau is being so indignant, bringing up the relationship that the U.S. and Canada had over the many years and all sorts of other things...but he doesn’t bring up the fact that they charge us up to 300% on dairy — hurting our Farmers, killing our Agriculture!

Why isn’t the European Union and Canada informing the public that for years they have used massive Trade Tariffs and non-monetary Trade Barriers against the U.S. Totally unfair to our farmers, workers & companies. Take down your tariffs & barriers or we will more than match you!

Just left the @G7 Summit in beautiful Canada. Great meetings and relationships with the six Country Leaders especially since they know I cannot allow them to apply large Tariffs and strong barriers to...

...U.S.A. Trade. They fully understand where I am coming from. After many decades, fair and reciprocal Trade will happen!

The United States will not allow other countries to impose massive Tariffs and Trade Barriers on its farmers, workers and companies. While sending their product into our country tax free. We have put up with Trade Abuse for many decades — and that is long enough.

Based on Justin’s false statements at his news conference, and the fact that Canada is charging massive Tariffs to our U.S. farmers, workers and companies, I have instructed our U.S. Reps not to endorse the Communique as we look at Tariffs on automobiles flooding the U.S. Market!

PM Justin Trudeau of Canada acted so meek and mild during our @G7 meetings only to give a news conference after I left saying that, “US Tariffs were kind of insulting” and he “will not be pushed around.” Very dishonest & weak. Our Tariffs are in response to his of 270% on dairy!


The anti-trumpistas just hate any policy he takes. If he slaps high tariffs to trade partners, they are angry. If he suggests zero tariff, they are still angry. Seems they are more confused, more double-talkers than the man they hate.
----------------