Thank you President Trump, Chairman Kim. You are no angels (none of us here) but it is better to have more capitalism and commerce, less communism and missiles, in Asia and the world. Great initiative (photo below from BBC). 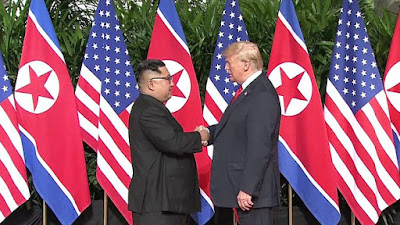 "President Donald J. Trump of the United States of America and Chairman Kim Jong Un of the State Affairs Commission of the Democratic People's Republic of Korea have committed to cooperate for the development of new US-DPRK relations and for the promotion of peace, prosperity, and the security of the Korean Peninsula and of the world."
https://edition.cnn.com/2018/06/12/politics/read-full-text-of-trump-kim-signed-statement/index.html

"The US president said he had invited Mr Kim to visit the White House at “the appropriate time” and that the North Korean leader had accepted his invitation."
https://www.ft.com/content/0342ebf2-6dc5-11e8-852d-d8b934ff5ffa


Poor North Korea but with a medium size population of 25 M people (S.Korea has about 51 M), it is safe to project that after denuclearization, soon Samsung and Apple, Ford and Toyota, BMW and Hyundai, HSBC and Citibank, Marriott and Shangri-la, San miguel and Jolibee, other big globa and regionall brands will soon be setting offices and factories, hotels and banks, in Pyongyang and beyond.

Singapore as host is a good model for NK -- small in both land area and population, previously very poor, no nukes, yet very prosperous and rich.

Trump as long-time businessman and recent politician with little political baggage that many politicians have may have inspired KJU to have more businesses, more trade and investments and less missiles and bombs in his country. The 8 years of "hope and change" leader has no track record of real business. The Clinton couple has politics as business, no real business selling useful goods and services.
US Ambassador to the PH Sung Kim has been with the Trump team in negotiating with KJU. Amb. Kim with US State Sec. Mike Pompeo in SG. Cool guys. (photo from Sec Pompeo's twitter) 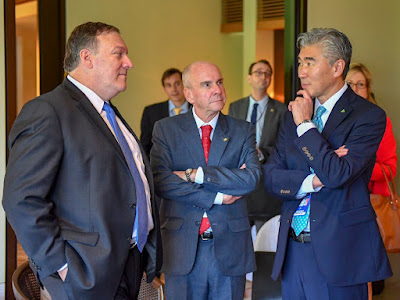 I have a S. Korean free marketer friend, Dr. Chung-ho Kim, then Pres. of the Center for Free Enterprise (CFE) in Seoul. We were in an Atlas event in Washington DC in Nov. 2009, 20th anniv of the fall of the Berlin Wall (thanks to the invite and travel grant secured by Jo Kwong, then Atlas VP). Chung-ho was one of the freedom speakers. In front of about 300 people he made a toast, "Unlike in Berlin where they have a wall, in Korea we have a fence separating the N and S. Korea. As Pres. of the Center for Free Enterprise in Seoul, I call on Chairman Kim (il Song) -- tear down this fence." Big applause from the crowd.

"I want to bring our soldiers back home. We have, right now, 32,000 soldiers in South Korea, and I’d like to be able to bring them back home. But that’s not part of the equation right now. At some point, I hope it will be, but not right now.

So he wants to pull out his Troops out of S. Korea, mainly to (1) save money, cut US spending, and (2) in line with zero nuke for NKor, zero US troops in SKor.

Good plan then. I think Trump plans to have another round of tax cut so he needs more spending cut.

CN influence over NKor will significantly decline. Soon N. Koreans will fall in love with McDonald's and Starbucks, google and youtube, Apple and Samsung, Toyota and Hyundai, Toshiba and LG.
------------