* This is my column in BusinessWorld last Monday, June 11.

From 2006 to 2013, the Mindanao grid had only 1,900 to 2,000 MW of installed power capacity, mostly sourced from hydropower facilities that provide higher output during the rainy season but declines during the summer.

As a result, power shortages lasting several hours a day are experienced during dry spells.

In 2014, the supply situation improved.

Starting 2016, the situation improved further with capacity reaching 3,162 MW and later rising to 3,559 MW in 2017, with the help mostly of coal power plants. The last two years showed significant power surpluses that competing power plants were bidding as low as P2.50/kWh in generation cost.

The committed projects (financing, construction stage) and indicative projects (planning and proposal stage) are shown below. 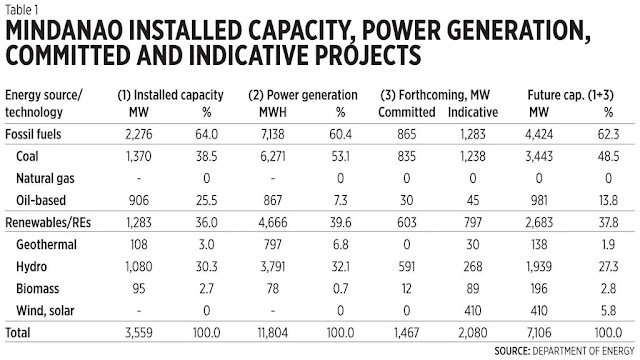 Early this month, a paper was presented at the UP School of Economics (UPSE), entitled “Cost-Effectiveness of Maximum Renewable Energy Penetration in the Mindanao Power Grid” by Dr. Sven Teske of the Institute for Sustainable Futures (ISF), University of Technology, Sydney. The event was sponsored by the Institute for Climate and Sustainable Cities (ICSC) and Mindanao Development Authority.

I was not there so I asked for a copy from UPSE, nothing came and perhaps ICSC did not give them a copy either. A friend of a friend sent me a paper by Dr. Teske last year which could be the basis of his presentation.

The IFS and Dr. Teske made a weird scenario of Mindanao capacity 6x that of DoE scenario. Their scenario is based on heavy renewable energy plus storage (RE+S) and RE plus dispatch (RE+D) and the following assumptions: (1) coal, oil and diesel plants phased out by 2050, (2) of the 3,200 mid-merit target by 2040, half to come from gas plants, half from hydro and biomass, (3) significant increase in solar and wind, (4) increase in storage especially battery (2,491 MW in 2050), and (5) interconnection with neighboring islands.

The weird ISF paper as propagated by the ICSC is obviously a product of the solar-wind lobby, partly by the gas lobby too. Compare what the industry players would actually invest, 410 MW of solar-wind indicative projects, vs what ISF-ICSC lobby of 37,496 MW or 91.5x larger, which is hallucination and illusion. 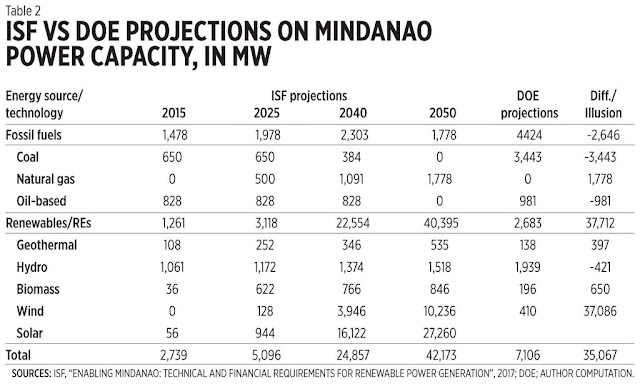 Electricity consumers in Mindanao and elsewhere simply want two things: stable electricity available 24/7 no brownout even for a minute, and cheap or competitive.

Solar and wind are not cheap.


If they are, we should have abolished by now the feed-in-tariff (FIT) scheme or guaranteed high price for 20 years, then the planned mandatory or obligatory renewable portfolio standards (RPS).
----------------