Free trade should mean that people are free to trade and do not need to secure permits to trade from governments. The expansion of governments — local, national, and multilaterals — has also resulted in the expansion of preconditions and negotiations before meaningful trade can be allowed.

This is what Adam Smith referred to in the quote above. It is the collective action of traders and not the coercive regulation of governments that free trade and real competition is established.

In recent months, “trade war” has become a common term used in international media and blame is put on the US President for stoking protectionism and implying that US trade partners that enjoy and experience huge trade surpluses for many years are not practicing protectionism.

Trade numbers will greatly help us to clarify things.

I got monthly data of merchandise trade, exports and imports, from the World Trade Organization (WTO). After getting the sum of trade balance, January to June then July to December of 2016 and 2017 and the first three months of 2018, I got the monthly average and daily average. I chose countries with relatively large value of trade surplus or deficit (in parenthesis) plus selected ASEAN countries like the Philippines. The numbers show some interesting patterns (see table). 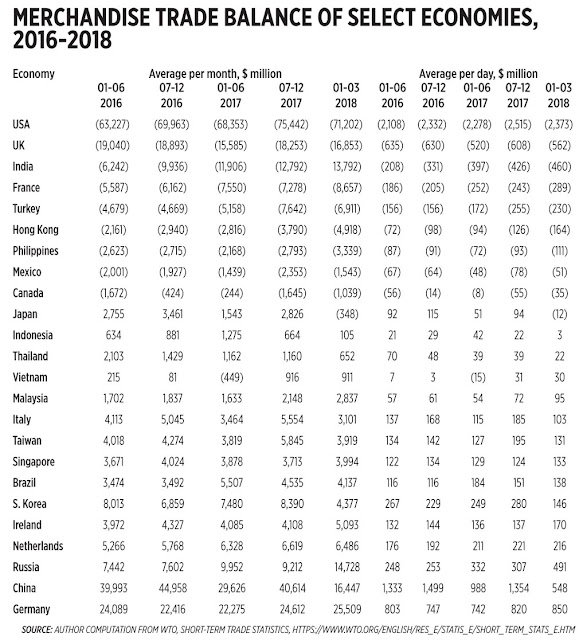 Here are the notable facts from these numbers.

One, the US continues to experience more than $2 billion a day in trade deficit, since many years ago until today. The second half of 2017 showed a big deficit, posting an average of $2.5 billion a day. US President Trump’s threats of imposing higher tariffs on certain imports became louder in early 2018, hoping to reduce the trade deficit.

Two, China has been enjoying a trade surplus of up to $1.5 billion a day in the second half of 2016, then Trump’s higher tariff in early 2018 for some of its exports has significantly reduced the imbalance but China still enjoys a trade surplus overall.

Three, Germany has the second biggest trade surplus after China with about $0.8 billion a day. The recent higher US tariffs for steel and aluminum were mainly directed at Germany and other European exporters.

It would seem that the US is not exactly “becoming protectionist” as most media reports and opinions claim. People got used to seeing the US as having perennial big trade deficit for many years and when Trump tries to correct this, those people get angry.

Ultimately we should assert free trade and people’s freedom to trade, not governments and bureaucrats’ freedom to restrict trade. There are net gains in trade (gains are larger than pains) while there is net diswelfare in protectionism.