This piece of advice from a famous classical liberal Austrian thinker should be a constant reminder to central planning-thinking leaders and officials in governments around the world, especially in communist and socialist societies like China, North Korea, Vietnam, Venezuela, and Cuba. It should also apply to global central planning-prone agencies like the UN and multilaterals.

Another famous Austrian thinker that advocated freeing individuals and private enterprises from too much regulations, taxation, and state nannyism is Ludwig von Mises.

In his book The Anti-capitalistic Mentality (1956), he extolled the value of competition and endless innovation in a free market economy:

“The characteristic feature of modern capitalism is mass production of goods destined for consumption by the masses. The result is a tendency towards a continuous improvement in the average standard of living… the market of a capitalistic society, the common man is the sovereign consumer whose buying or abstention from buying ultimately determines what should be produced and in what quantity and quality… Wealth can be acquired only by serving the consumers. The capitalists lose their funds as soon as they fail to invest them in those lines in which they satisfy best the demands of the public.” 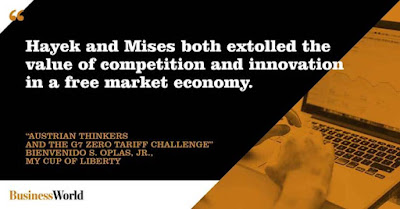 The dramatic expansion of goods and services worldwide has resulted in substantial increases in global trade and investments. Consumers are the main beneficiaries of increased trade as they get access to more products and services from more suppliers and countries at competing prices.

Some governments, however, are less friendly to their own citizens and trade partners abroad by erecting various forms of restrictions, implicit and explicit, through high tariff and/or non-tariff barriers and measures (NTBs, NTMs) to products and services that enter their soil.

The term “trade war” has become famous recently because of the sentiments of US President Donald Trump to match the high tariff imposed by its G7 partners to some of its exports. He cited Canada’s 270% tariff on US dairy exports, the 10% tariff by the European Union on American car exports, the 25% China tariff for the same while US tariff for imported cars from EU, Japan, China, etc. is only 2.5%.

So during the G7 Summit in Canada last week, instead of having equalized high tariff (EHT) among the members (aka “trade war”), Trump proposed a second option – equalized zero tariff (EZT), zero subsidy.

Between these two options, EZT is the easier thing to do, for two reasons.

One, four G7 members are also EU members and they have zero tariff already among them in the EU. So they only need to extend the zero tariff to the three other G7 members, Japan, Canada and US.

Two, existing tariff rates are generally low and hence, closer to zero than 10%. Member-countries of the World Trade Organization (WTO) enjoy the most favored nation (MFN) privilege, meaning what one country imposes as tariffs on its favorite trade partner should also apply to all other members. Standard deviation of tariff rate (SDTR) means the extent of variation in tariffs, so the higher the SDTR, the more protectionist an economy is for certain products or commodities. 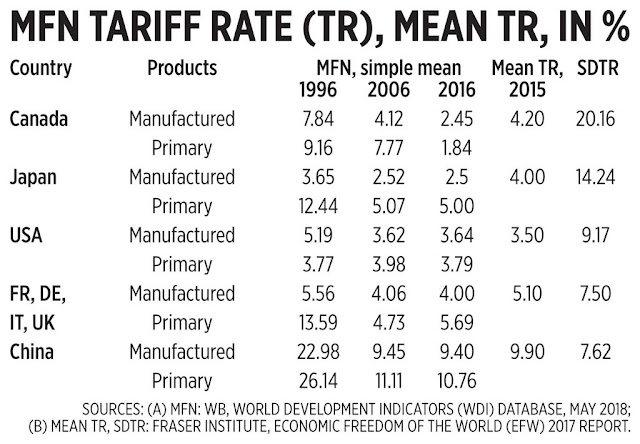 So for the G7, EZT is easier to implement and more preferable than EHT. It is China that is the most protectionist and hence, will have great difficulty moving towards EZT.

The works of Hayek, Mises, and other classical liberal thinkers like Adam Smith, David Ricardo, John Locke, and John Stuart Mill, the application of their thoughts to current issues like free trade vs protectionism, will be tackled in a lecture by the Students for Liberty Philippines (SFL) this coming June 16, Saturday in Quezon City.


Young minds are more receptive to classical liberal and free trade philosophy because they have experienced first hand the beauty of more consumer freedom, more mobility across countries, and more civil society action to social problems.
----------------