Some comedies in the recent PH high inflation rate

Comedy #1, Dutertenomics were totally clueless that this thing can happen. They have believed their own projections and delusion that inflationary pressure of the TRAIN law would be mild and slow (chart from Rappler). 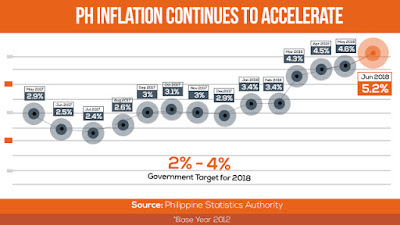 Of course the bad joke is on the consumers. Dutertenomics officials will enjoy huge pay as consultants with the WB, ADB, IMF, other multilaterals when their term would end.

Comedy #2, this pronouncement from Roque. 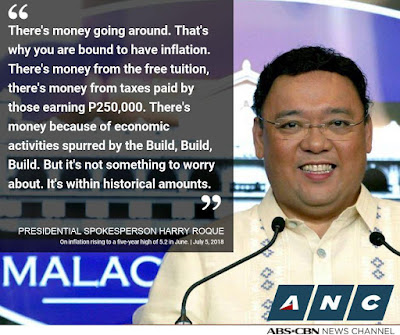 Comedy #3, Dutertenomics top guns were silent when Dr. Noel de Dios, among my former teachers at UPSE in the 80s, spoke and blamed them.

"University of the Philippines (UP) School of Economics professor Emmanuel de Dios called out the government for not taking the blame.

De Dios said economic managers should at least acknowledge that the Tax Reform for Acceleration and Inclusion (TRAIN) law has something to do with the soaring inflation.

"It's futile for the DOF (Department of Finance) to say TRAIN is only responsible for 0.4% of the [inflation]. But who is in charge of the economy? 'Di ba silang lahat (Isn't it all of them)?" De Dios said in a forum on democracy and governance on Thursday, July 5.

"If you read [Agatha Christie's novel] Murder on the Orient Express, ganoon ang nangyayari dito (that's what's happening here). Pointing fingers, but all of them are guilty. And the sad part about it is there has been no coordination among these government agencies," De Dios added.

Boom. By the way, of the 4 member-heads of the (Development Budget Coordinating Council (DBCC) -- DOF Sec. Dominguez, NEDA Sec. Pernia, DBM Sec. Diokno, and BSP Gov. Espenilla -- only Dominguez is not from UPSE. Pernia and Diokno were former faculty members, Espenilla is an alumni like me.

Dutertenomics will be busy looking for other factors to blame but they will never admit that their inflation projections and scenario were just delusions.

Posted by Bienvenido Oplas Jr at 12:54 AM