BWorld 223, Ease of setting up and closing down business

Last June 6, I attended the “Seminar on Protecting your Trademarks and Inventions Overseas” jointly organized by the Philippine Chamber of Commerce and Industry (PCCI) and the World Intellectual Property Organization (WIPO), held at the PCCI building in McKinley Hill, Taguig City.

The main audience of that seminar were entrepreneurs and companies big and small to help them be aware of existing intellectual property rights (IPR) rules and their protection, commercialization, licensing and dispute resolution. I do not represent any SME or big company but I was invited there by Jess Varela, Chairman of PCCI Committee on IPR.

The three important speakers that day were Dennis Broze and Peter Willimott of WIPO Office in Singapore and Atty. Allan Gepte, Commissioner of the Tariff Commission and former Director-General of the Intellectual Property Office (IPO).

Then last June 13, I attended the 6th Ease of Doing Business (EODB) Summit 2018 at the PICC, organized by the Department of Trade and Industry (DTI). It is an annual event sponsored by the DTI with one important goal — to raise or improve the Philippines’ global ranking in the World Bank’s (WB) Doing Business (DB) annual reports. The DB 2018 report was recently released and the Philippines’ global rank has worsened, compared to its ranking in the last two or three years.

This year, the EODB 2018 event is more optimistic because of the passage of the “Ease of Doing Business Act of 2018” or RA 11032 which was signed into law only last month. The DTI and various agencies including SEC, LRA, BIR, BOC, BFP, LGUs have adopted various measures to hasten the law’s implementation.

Among the important speakers in the EODB 2018 were DTI Secretary Ramon Lopez, who is also the Chairman, Ease of Doing Business and Anti-Red Tape Advisory Council; Senators Juan Miguel Zubiri and Aquilino “Koko” Pimentel III, and Mr. Guillermo Luz, former Co-Chairman of the National Competitiveness Council (NCC). Sen. Zubiri is the main author of the law in the Senate and also the Majority Leader while Sen. Pimentel is former Senate President and now Chairman of the Committee on Trade.

In both the PCCI-WIPO and DTI events, the over-riding subject is competitiveness of the Philippine economy and its businesses. 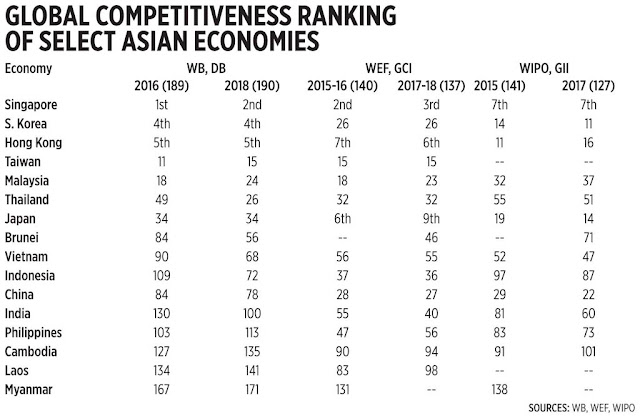 Numbers in parentheses represent the number of countries and economies covered in that particular annual report.

While the results in global ranking vary among the three reports, one trend can be identified — the most competitive Asian economies are Singapore, South Korea, Hong Kong, Japan, Malaysia, and Thailand.

The Philippines is among the least competitive in the region, which is not good for us.

I have three wish lists on this matter.

One, the prioritization and signing into law of RA 11032 is among the very few measures of the Duterte administration that I support. I wish that he will do more ease of doing business policies, not the ease of closing businesses such as when he moved to close Boracay for six months or the ease by which the government over-taxed people via TRAIN.

Two, I wish there was a provision on the ease of closing a business in RA 11032. Among the best incentives to attract investment is a contestable market or free/easy entry, free/easy exit. If businesses see that government will bureaucratize and harass them if they decide to close shop someday, they will think twice about coming in.

Three, I wish there was another law mandating that work in government (local and national, elected and appointed, continuous or on-off) will only be a maximum 15 years, prompting officials and staff to go back to the private sector.

Since many officials intend to become regulators and bureaucrats until they retire, they tend to be more prohibitionist and extortionist since their over-regulations and taxation of business will not apply to them.