“I have no reason to suppose that he, who would take away my Liberty, would not when he had me in his Power, take away everything else.”
— John Locke
(1632-1704, British philosopher)

Recently, President Rodrigo Duterte ordered the Philippine National Police (PNP) to arrest people who are out on the streets at night and seem to be idle or out making “tambay.” His speech to the PNP last June 14, 2018, which effectively became a directive was,

That directive has no details and since then, thousands have been rounded up by the PNP and brought to jails. Loitering or vagrancy has been decriminalized by RA 10158 in 2012 or under the previous administration.

I shared on Facebook a video uploaded by Ariel Morco last June 20. In that video, he went out of his small house, shirtless, when a police car and motorcycle passed by.

After he was accosted by an officer on a motorcycle, he went back inside but the officer pulled him out and was brought to the police van.

Mr. Morco wrote this note in his video,

That video with 10,454 views the last time I checked it, was later removed with a note by Facebook, “Page could not be found.”

I suspect that some influential people have asked Mr. Morco to take it down otherwise, some ugly incidents might happen to him or his family.

As seen in the video, his house is small and since it lacks air circulation, its residents occasionally remove their shirts while indoors to keep themselves cool. Occasionally, some of them go out, shirtless.

And when some PNP officers pass by, they think they have the “right” to penalize and prosecute these poor people, based on what the president said.

The World Justice Project (WJP) produces an annual study, the “Rule of Law Index” (RoLI) and score countries based on their performance on 8 factors and 44 sub-factors. The RoLI 2017-2018 Report involves more than 110,000 households as respondents and 3,000 expert surveyors in 113 countries and jurisdictions.

I checked the Philippines’ score in relation to our East Asian neighbors on two of eight factors: Factor 4 on “Fundamental Rights,” and Factor 8 on “Criminal Justice.” Not included in the report are Brunei and Laos.

In particular, I checked these four sub-factors:

4.2 The right to life and security of the person is effectively guaranteed.

4.3 Due process of law and rights of the accused.

The result for the Philippines indeed, is ugly. 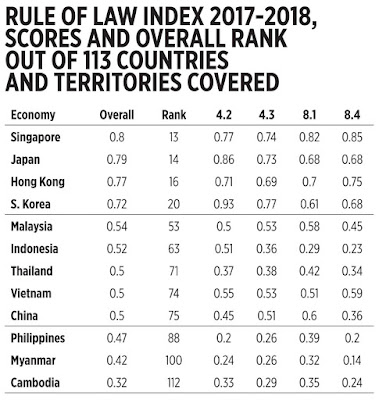 These four sub-factors are among the “downers” or those that pulled down the Philippines’ overall score and global rank.

I was wondering, if Mr. Morco resisted being dragged to the police van, could he been considered as “nanlaban kasi” [resisted] and perhaps shot later?

The PNP should be ashamed of incidence like this.

If the leadership is serious in fighting abuses and extortion by their men, they should name those officers and announce their suspension, publicly. Otherwise, those officers will do it again, preferably in poor neighborhood with no CCTV.

We pay more tax-tax-tax under this administration that partly raise the salaries and perks of personnel in government including the PNP. One reason why crime can be high is because the PNP are busy with mundane concerns like going after ordinary, innocent, unarmed citizens.
-----------------