In the case of Malampaya gas to power project in offshore Palawan, the Philippine government has attained these and other advantages: (1) more electricity production from domestic natural gas, (2) more revenues via Malampaya royalties, 60% of gross production amounting to more than P400 billion over the last 16 years (see table). 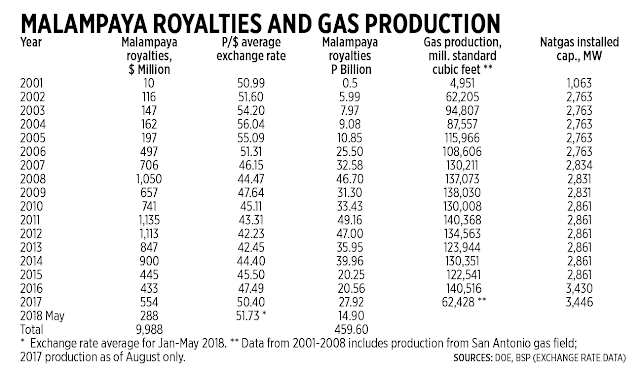 The Department of Energy’s (DoE) actual count of royalties from 2002 to 2017 is P424.7 billion. My computation above of P459.6 billion is only an estimate from a simple multiplication of $ million by the average exchange rate.

The third benefit is that some of Malampaya gas is used to power compressed natural gas (CNG) buses that ply the Manila-Southern Luzon routes. As a result, less pollution is produced.

The fourth benefit from the project is that it employs skilled Filipino professionals and engineers. Onshore Filipino staff also have the knowledge to build smaller platforms for offshore gas rigs.

With these benefits in mind, these two reports among others caught my attention:

The Malampaya consortium spent huge amounts of money and technology, risked their people in the exploration, drilling, development, and laying down heavy pipelines in seabed hundreds of kilometers to Batangas power plants. And they get only 40% of the revenues.

The Commission on Audit (CoA) however, has ruled several years ago that aside from surrendering upfront 60% of gross revenues to the government, the consortium must pay income taxes to the BIR/DOF from their 40% share.

That kind of thinking is scandalous for the following reasons.

One, the law where SC 38 was based, Presidential Decree (PD) 87, “The Oil Exploration and Development Act of 1972,” gives the contractor, the Malampaya consortium, the privilege of bundling the income tax within the 60% share of government.

Two, under PD 87, the government assumes zero investment cost and risk. So if the consortium did not discover huge amounts of natural gas from Malampaya, the government was not required reimburse them for expenses.

Three, it does not recognize that aside from the huge money the Philippine government receives yearly from the consortium, electricity supply is significantly bolstered especially in the Luzon grid. Coal contributes 50% and natural gas contributes another 22% of total electricity production in the Philippines in 2017. These energy sources are stable 24/7 and are not intermittent, unstable, and unreliable such as solar and wind power.

It is good that the DoE, DoF and Office of Solicitor General (OSG) in previous administrations and even in current administration did not think this way.

But the CoA remains persistent and has ordered the consortium to pay P146.8 billion or nearly $3 billion of “unpaid income taxes” from 2002 to 2017.

CoA should stop these moves and consider the many other advantages of the Malampaya gas to the Philippine economy.

There should be more big private investments in the country like the Malampaya gas development, less politics, and intrusive government bureaucracies that discourage investments.
---------------