BWorld 226, The EPIRA is working

The Electric Power Industry Reform Act (EPIRA) of 2001 or RA 9136 was among the most important pro-market reforms in the Philippines. Before that law, the government-owned National Power Corporation (NPC) was the single-biggest debtor agency and the single-biggest deficit generator, fiscally bleeding the taxpayers while providing unreliable power supply.

EPIRA has significantly changed this, moving away from a state monopoly to a competitive sector with dozens of competing players in power generation alone. Competition can pressure price declines overall while improving electricity supply quality and reliability.

Yet many sectors still glamorize that dark era of state monopoly and endless fiscal deficits. They complain of “continuously rising” electricity prices and then blame EPIRA.

And while they occasionally spike, the general trend is a price decline.

When prices look “unaffordable” for some, people should realize that the monthly electricity bill contains about a dozen items. These include generation, distribution, and transmission charges — the three costliest items — as well as supply, universal, system loss, and metering charges. The bill also covers VAT and feed in tariffs and so on.

After EPIRA was passed, focus was placed on the privatization of NPC power plants, not in the construction of new ones.

One, installed capacity from 1991 to 2001 — the decade before EPIRA — expanded twice but power generation expanded only by 1.8 times. This suggests low productivity and efficiency under the NPC.

Two, capacity from 2001 to 2011 (EPIRA’s first decade) has expanded only 1.2 times but power generation expansion was 1.8 times. This means the private owners of NPC-privatized power plants were more efficient in optimizing the capacity and efficiency of those plants.

Three, from 2011 to 2017 (last six years), power generation has expanded 1.4 times in lock step with installed capacity despite the fact that many capacity additions were from intermittent, unstable renewables with low capacity factors like wind and solar. This shows again higher efficiency and lower prices by private players. 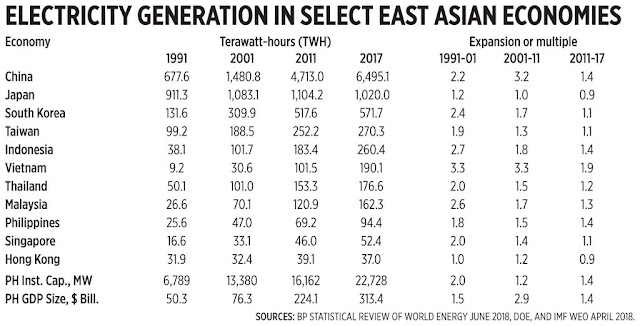 Meanwhile, this Monday, June 25 the Philippine Electricity Market Corporation (PEMC) will hold a press briefing after the PEMC annual membership meeting. The event will include the election of a new set of PEM Board of Directors and handover of market operations and governance functions from the DOE to the new PEM Board.

This will be a very significant event for two reasons.

One, the creation of the Independent Market Operator (IMO) as specified in EPIRA will become a reality after 15 years of foot-dragging by the DOE. Rules of the Wholesale Electricity Spot Market (WESM) were promulgated in 2002 and the PEMC was incorporated one year later. The PEMC was designated by the DOE as the Autonomous Group Market Operator (AGMO) in 2004.

Two, the PEMC will become a real independent market operator (IMO) and not a DOE-designated AGMO. Chairmanship of PEMC will be held by one of the WESM players and will not come from government. This will be a first time since PEMC was created in 2003 or after 15 years.

Under the previous administrations, it may be argued that the DOE partially violated the EPIRA because it made PEMC as government-dependent market operator. So now this anomaly will be corrected.

DoE will still have regulatory power over the IMO through the issuance of related Department Administrative Orders, Memo and Circulars, and via the Energy Regulatory Commission (ERC).