There seems to be a predominant sentiment to demonize the United States.

These sentiments are variations of a theme, which include: a) “US protectionism” vs G7 nations, the European Union (EU) and China; b) US is a declining power while China is now the “new vanguard” of globalization; and (c) US withdrawal from the Paris Agreement is adverse unilateralism while China or Germany is the new leader of the “save the planet” movement.

These sentiments are based on illusion and emotionalism than hard data and propelled more by anti-Trump hysteria and pro-China wishful thinking in its Belt and Road Initiative (BRI).

Here are the numbers that show why these assertions are based on illusion than reality. These data sources are (a) GDP: IMF, World Economic Outlook database, April 2018; (b) Tariff rates: Fraser Institute, Economic Freedom of the World (EFW) 2017 Report; (c) Coal use in million tons oil equivalent (mtoe): BP, Statistical Review of World Energy, June 2018. 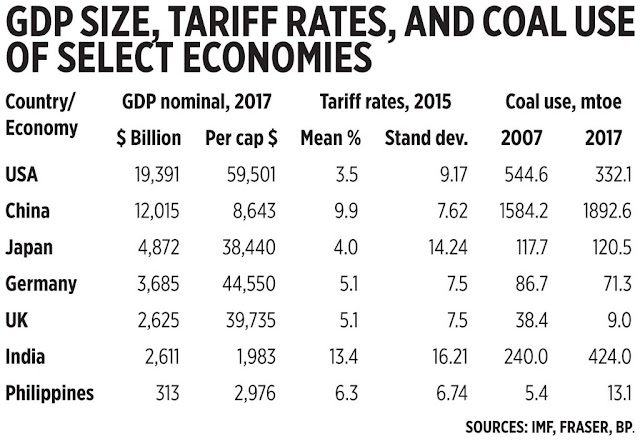 Covered here are the world’s six biggest economies in terms of GDP size, current or nominal prices. The Philippines is added to help compare our GDP size, trade and energy/climate policies.

One, the US remains the biggest economy in the world despite anemic growth over the past decade (for instance, not one of the eight years of “hope and change” that the US economy grew 3% or higher). Its GDP size is nearly equal to the combined size of China, Japan, and Germany, the second-, third-, and fourth-largest economies.

Thus, to say that the US is a declining anchor of globalization is based on illusion.

Two, the US has the lowest average tariff rates in the industrialized world, has much lower rate, nearly one-third (1/3) that of China. Thus accusing “US protectionism” and implying that the rest of G7, EU, and China are non-protectionist is again based on illusion and not hard data.

Three, US withdrawal from the Paris Agreement is a wise move as China and India are the world’s biggest consumers of coal power, a favorite whipping commodity of the “save the planet” movement.

On a related note, it is wrong for the anti-coal groups in the Philippines to call for further coal restriction since our coal use is very small even compared to “green” Germany and Japan, and much smaller than those of India and China.

China’s BRI can be considered more as a mercantilist project than a free trade project. Mercantilism is a 16th to 18th century economic policy that viewed more exports and less imports — more wealth accumulation via protectionism while having aggressive exports — as good policy.

Check China’s BRI information and these terms stand out:

Dutertenomics’ build-build-build (BBB) with high involvement of China banks and contractors is falling along the China BRI mercantilism. This means the government’s build-build-build requires lots of loans-loans-loans from China and necessitates tax-tax-tax via TRAIN and succeeding tax laws.

The US’ zero tariff, zero subsidy challenge during the G7 Summit in Canada early this month is somehow addressed to China. As shown by the numbers, China is far out from going to zero and thus the Trump administration’s policy is equalized high tariff with China. Judging from current movement in global stock markets, China stocks in Shenzhen and Shanghai are experiencing heavy beatings. Very likely Xi Jinping will blink first.

Meanwhile, this June 20, the Stratbase ADR Institute, Inc. (ADRi) is hosting a roundtable discussion on “The 21st Century Silk Road: Perils and Opportunities of China’s Belt and Road Initiative” with Mr. Richard Heydarian as main speaker, with yours truly as one of the three reactors. Venue is the Tower Club, Makati City.
----------------