The BusinessWorld Economic Forum 2018 is fast approaching this coming May 18 and it has a timely theme, “Disruptor or Disrupted? The Philippines at the Crossroads.” Focus is on the challenges, risks and potentials of artificial intelligence (AI) and other technological advances.

Here are some numbers showing the degree of competition among countries and economies in encouraging and protecting innovation and IPR as shown by three data sources. These are the

Each pillar is divided into three sub-pillars and each sub-pillar is composed of individual indicators, for a total of 81 indicators. Cool. 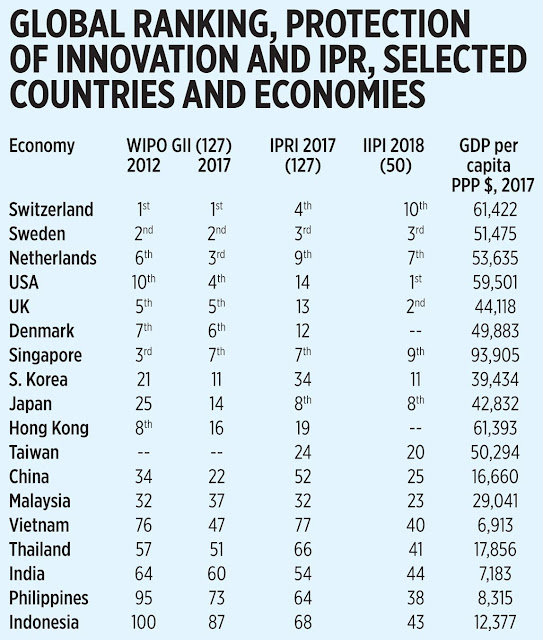 Three, many East Asian economies are rising in ranking, landing in the top 25% in global ranks.

The letter was spearheaded by the PRA in the US and Minimal Government Thinkers is among the 70 co-signatories. The letter was also sent to UN Secretary-General Antonio Guterres, and Director-General of the World Health Organization (WHO) Tedros Adhanom Ghebreyesus.

The letter highlighted some important facts, among them:

* Copying is not the same as inventing and enforcement of IP rights helps prevent counterfeits that undermine innovation and help finance criminal organizations. This shadow economy of counterfeits is responsible for nearly 2.5% of global imports, amounting to nearly $461 billion.

* 10% of global pharmaceutical trade is thought to be counterfeit. These “medicines” have serious health consequences, including death. New medicines require research, trials, $2.8 billion, and up to 12 years. IP Rights incentivize commitment and collaboration.

* Removing trademarks through plain packaging has costly economic, health, and security consequences. $300 billion is the implied loss to the beverage industry if such packaging is applied to alcohol and sugary drinks.

Governments, national and multilaterals like the UN and WHO, should help encourage and respect IPR and innovation. Some cases however show that they do otherwise.

For instance, the 2016 UN High-Level Panel on Access to Medicines, their report has portrayed patents and IP as harmful to global development and human rights. Backward thinking.

The enemy of public health and human rights are counterfeits and substandards — medicine, food, and drinks — and the criminal organizations that manufacture and sell these products.