Last May 22, a friend Joe Real, posted this in his fb wall, praising the automakers and attacking Trump about climate change.

Carmakers to Trump: 'Climate change is real'
BY MORGAN GSTALTER - 05/22/18 08:27 AM EDT
http://thehill.com/regulation/energy-environment/388736-carmakers-in-letter-to-trump-climate-change-is-real

Cadiz City, Negros Occidental. He is among the bright boys our city has produced because he went to Philippine Science High School, then UPLB, Agri Engineering. He has lived in California for many years now.

We have debated a few times in the past over climate and energy issues, he taking the alarmist side while I take the realist/skeptic side. One time he deleted my comments, also the comments of his other friend who disagreed with him on his "more renewables to save the planet" argument. It was some sort of an alarm bell for me but I let it pass. So I commented in his post, 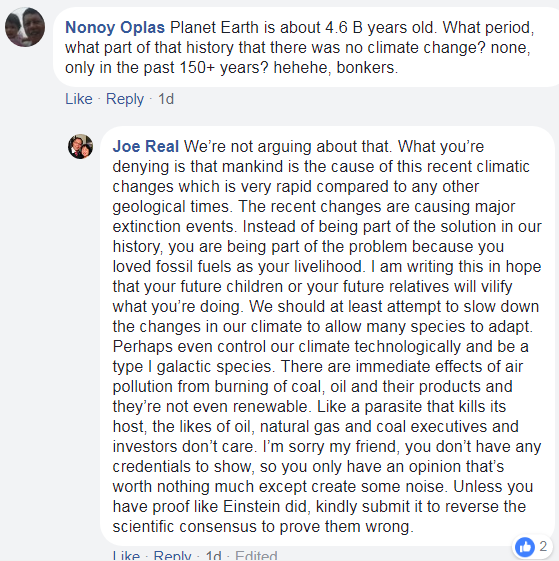 At first I did not read his entire response so I followed up with these questions:

Then I re-read his comments and realized that it was full of unsubstantiated claims and personal attacks, of deep-seated intolerance at being questioned of his belief.

See these for instance and my comments in his thread:

(1) "climatic changes which is very rapid compared to any other geological times" -- where are the proof of this? rapid by how much, 2x, 50x, 100x? Proof and links? say compared with the Medieval warm periodA? Roman warm period?

(2) "you are being part of the problem because you loved fossil fuels as your livelihood." -- Where is your proof, Joe? I wish that was true so I will be rich now. You are guided by emotionalism and voodoo science to make fake and stoopid claims,

(3) "I am writing this in hope that your future children or your future relatives will vilify what you’re doing." -- my children enjoy riding an airplane that uses fossil fuels. If I make them ride giant kites or giant brooms to fly to Negros or Iloilo, they will vilify and hate me.

Now look at yourself and your lifestyle -- you post your travels to far away places, meaning you did not ride giant kites but giant airplanes that use fossil fuels, then you hate fossil fuels. That's 101% hypocrisy double talk, Joe.

(4) "you don’t have any credentials to show, so you only have an opinion that’s worth nothing much except create some noise." -- horrible, if one cannot confront the issues and counter-arguments, just do endless personal attacks.

Again, answer this, you who have "credentials":

Joe's other friend, Paul Sarmiento, also made some good observations:

Joe Real To prove that the current change in climate is mainly due to man, you have to clear all doubts that natural climate variability is smaller than human caused forcing. Unfortunately, as I have been arguing across different fora, the records we have is too short and too sparse to draw any conclusions from.

But of course you would ignore that since you've been an AGW believer from the get go. Open your mind and use critical thinking. Use your statistical skills and not rely on conclusions from other scientists. Their own data will belie what they conclude.

But a quick way to falsify this notion is to look at the first half of the 20th century vs the 2nd half. Both periods shows a sharp increase in global temperature. From 1900 to 1940 the slope of the temperature rise is almost the same as for the period of 1970 to 2000.

But while AGW theory blames the 1970 - 2000 rise to humans, they cannot attribute the same to the rate of increase in the early 20th century. Therefore, to blame nature for the first and to blame humans for the second is incongruent to the way science works.
--------------