The DOF/Dutertenomics and what I think is its front-NGO, Action for Economic Reforms (AER). Very vocal and noisy in tax-tax-tax (oil, lpg, cars, coal, sugar, cigarettes, etc; expanded VAT), saying that TRAIN will not be inflationary and any inflationary impact is just bogeyman (panakot lang) and not real. Now vocal in supporting TRAIN 2 and defending TRAIN 1.

If you guys are noisy at raising oil taxes, you should be equally noisy at making fare hike adjustments because you know that high oil prices will result 100% in the need for higher fares. But you are silent. You know that fare hikes will result in even higher inflation rate. And January 2019 oil and coal tax hike Part 2 is near. Sometimes Govt and "non-govt" like AER can be similar or one and the same?


I believe that instead of calling for suspension of TRAIN 1, TRAIN 2 should reverse some of the ugly provisions of TRAIN 1 like oil-lpg-coal tax hikes. But AER has none of it, they argue to retain those tax hikes and blame something else like high world oil prices, etc.

Many of the AER officials are anti-Du30 drugs war, anti-China a__licking, good. But they really believe that Du30's additional tax money via TRAIN won't be used to bribe legislators and SC people to remove the CJ, Ombudsman? That TRAIN money won't be used to contract big loans and favors from the China communist dictatorial government?

AER has a weekly column in BWorld, "Yellow Pad." I think 95% of their column is about singing rah-rah-rah, tax-tax-pah.

If Dutertenomics simply cut the personal income tax, they simply corrected the historical injustice of CTRP of 1997, they would have won the hearts and minds of many people including the anti-Du30 groups, me included. But they were tax-hungry with all sorts of bleeding heart arguments why they want more transfer of money from private pockets to government pockets.

TRAIN is also pro-China communist government. Big integrated PPP projects were reversed by Duterte to become hybrid PPP so that the construction phase can be given to China contractors, O&M to be given to Filipino contractors. TRAIN money will make sure that new big loans with China will be paid in the future.

Even my haircut cost in a public market barber shop, the P40 (non-aircon, open air with electric fan) has become P50. The air-con haircut rose from P50 to P70. People raise their own prices because their cost of living has increased anywhere.

From IEA and WHO data, as of 2015 estimates showed that some 61 M Filipinos or 60% of total households were still using firewood/charcoal for cooking, lighting, ironing, other energy needs. Cheaper oil and LPG allowed many poor households to use LPG for cooking, this saved perhaps millions of trees from being butchered, the price of charcoal or uling declined. With recent world oil price hikes + tax-tax-tax of TRAIN, LPG prices rose, many poor people are going back to using charcoal and firewood, indicated by the rising prices of charcoal -- about P100-120/sack in 2017, now P130-150/sack. This means millions of trees will be stolen and butchered in the public forest lands. 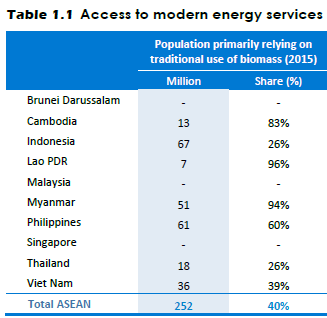 Come on DOF, #TRAIN tax-tax-tax is the collateral. Our oil, lpg, cars, coal power, electricity transmission, sugary drinks, etc are rising bec of current spending and future spending to pay more China loans. Why is the #DOF evasive about this?

From the above Inquirer report,

"We borrowed $200 million, there was no collateral,” Dominguez said, referring to the Philippines’ first-ever panda bond issuance.

In March, 1.46 billion renminbi or about P12 billion in three-year panda bonds were issued by the government in China at a “tight” yield of 5 percent."

At 5% interest rates -- DOF will need more tax-tax-tax so that present and future generations of Filipino taxpayers will be able to pay those expensive China loans. Because Du30 told the DOF and Dutertenomists to get more loans from China? And some NGOs like AER would justify all tax-tax-tax by Duterte? Magaleeeng.

Posted by Bienvenido Oplas Jr at 12:37 AM