BWorld 216, Positive and negative disruptions in the electricity market

Last week, May 22, a BusinessWorld report said “DoE forecast for peak power demand exceeded on May 17” referring to 10,688 MW peak demand in the Luzon grid on May 17 reported by the National Grid Corp. of the Philippines (NGCP) vs peak demand in 2017 of 10,054 MW.

The increase of 634 MW or 6.3% increase can be considered as positive disruption. Demand for electricity to power various economic activities by households and corporations including those with 24/7 operations remains high and they approximate GDP growth.
Reports of more renewable investments and installations, wind-solar especially, are not “disruptors” because in 2017 or nine years after the enactment of RE law of 2008, solar-wind contribution to total electricity generation in the Philippines constituted only a measly and near-negligible two percent (2%).

During the BusinessWorld Economic Forum 2018 last May 18 at Grand Hyatt BGC, among the speakers were Kristine Romano of McKinsey & Company, and Luis Miguel Aboitiz of Aboitiz Power Corporation. Ms. Romano partly mentioned that innovations in the energy sector is among the big disruptors in the world today. Mr. Aboitiz skirted discussing his sector and mentioned more about the challenges and opportunities of endless innovation and disruption in many sectors.

And we go back to renewables touted as disruptor to “save the planet” (save from what, rains and floods?) and there is one belief or myth that continues to persist — that the cost of wind-solar technology is declining quickly so the cost to generate electricity from them will decline too.

Intermittent or variable renewable energy sources (VREs) are given feed in tariff (FIT) or guaranteed price subsidies for 20 years, among many other perks, by the RE law of 2008 (RA 9513). What happened to this scheme?

First, the FIT rates given to RE developers keep rising yearly, despite the touted decline in the cost of wind-solar, and second, the estimated revenues per kWh is are highest for wind-solar and lowest for run of river (RoR) hydro (see table). 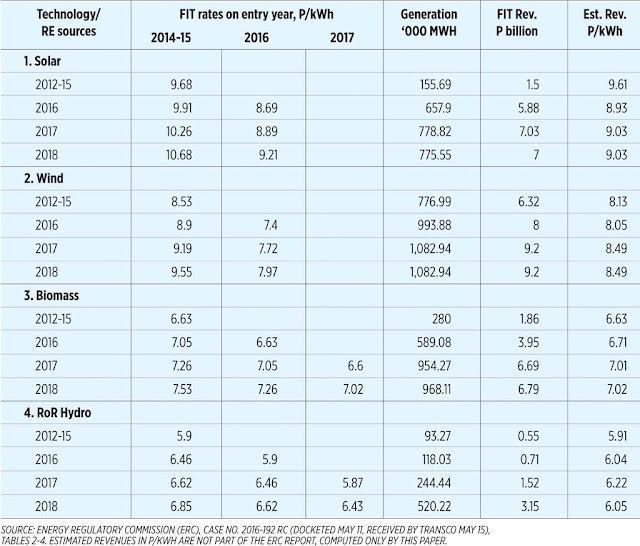 Then also last week, May 21, the ERC has granted the rise in FIT-Allowance (FIT-All) in our monthly electricity bill from 18.30 centavos/kWh to 25.32 centavos /kWh starting June 2018 billing. This is to cover under-recoveries in 2017 alone.

And that explains the negative disruption in the Philippines electricity market. Energy coming from “free” solar and wind and “declining” technology cost actually result in even more expensive electricity.

This higher FIT-All rate includes only under-recoveries until 2017. Under-recoveries this year not included yet, so a higher rate of probably 33 centavos/kWh can be expected in late 2018.

The environmental and RE lobbyists succeeded in making cheaper coal become more expensive via higher coal tax of P50/ton in 2018, P100/ton in 2019, and P150/ton in 2020 under the TRAIN law. Taxes for oil used by power plants also went up as well and expanded VAT application to transmission charges.

Adding more intermittent, brownout-friendly, and expensive VREs like wind-solar is wrong. Adding battery storage will reduce the intermittency but will definitely raise the cost to consumers further.

Government should take the side of consumers who desire cheaper, stable electricity. Government should stop its double standards in energy taxation, slapping higher excise tax for reliable oil and coal plants but exempting from excise tax the unreliable, unstable, intermittent VREs especially wind-solar.
------------