Malaysia elections, Mahathir back in power but my friend Wan Saiful lost

Of course I hoped that Najib and party would lose because of his known big time populist and corrupt ways. His world-known corruption in the 1MDB scandal should have brought him down but because they seemed like a one-party state, his politician supporters bailed him out.

I found the Malaysia election a bit weird, at least compared to the PH. They hold it midweek, Wednesday. When people have work? I don't know if it was a holiday. In the PH, all local and national elections are held on a Monday, usually 2nd Monday of May. People can have an extended vacation when they go home to their province on a weekend then cast their votes Monday morning, then go back to Manila or other big cities in the afternoon.

I think Najib and party did it in order to disenfranchise many white collar workers -- who tend to vote for the opposition -- they will have difficulty going to their province to vote then come back the same day.

Anyway, my friend lost. But given the fact that he campaigned for only 2 months and 1 week, he did well.

Wan posted this in his fb wall, in Bahasa, I just copy-paste here a portion of it from fb translation. I think incoming PM Mahathir will invite him to serve in some govt agencies. Good luck, Wan.
---------= 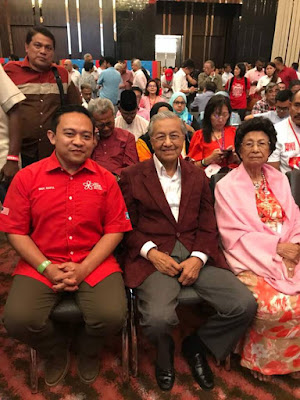 What a beautiful night for us!

May 9th 2018 is a historic date for Malaysia. All of us are among the people who have played a very important role in this change. Let us welcome a brilliant decision achieved by pakatan harapan.

I thank all of the friends who helped me in this election. This is my first election, and the trust that is given to compete in pendang is a heavy trust. But with the help given, we managed to run a healthy campaign….

We fought very well and very healthy. The country figures came to pendang to help us. The media also gave us good coverage. Even if we don't succeed in pendang this time, we need to arrange a step and arrange an organization to allow us to get up again to prepare ourselves for the next fight. I want to be together in the struggle for pendang future, with friends in pendang. I hope we'll all be together in that renewed agenda.

I wrote this message when I was in the same council with tun Dr. Mahathir Mohamad and tun asked me to say hello to all in pendang. The formation of the new empire is very close. It's a happy day for us and the whole country. The changes that we dream about are getting closer. Let's both celebrate this happy day!