I am reposting this column 11 years ago by a friend, former UP CBA Prof., Dr. Rene Azurin. Rene has published several books. He mentioned me and Vernie Atienza here. Enjoy. 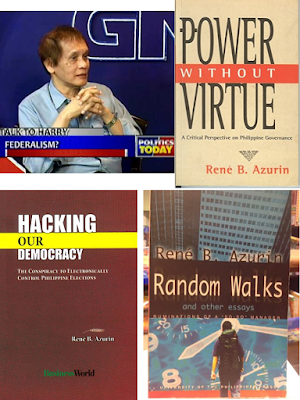 'Zero income tax' has a nice melodic sound. It produces in me the same resonant vibrations as Toyota's 'zero defect' production system and the environmentalist movement's 'zero waste' program. So, given the current hoohah over the BIR's latest failure to meet its tax collection targets, it seems timely to propose that hard-to-collect income taxes be now scrapped altogether and the revenue derived therefrom raised instead through easier-to-collect consumption taxes. This replaces a messy, susceptible-to-corruption system with a simpler, less discretionary one.

I have actually been suggesting this for many years now to any tax official who would listen so I was very glad to learn that my friend and former graduate school classmate, Dr. Veredigno Atienza, has created an advocacy group to lobby for this to happen. The organization founded by Dr. Atienza is called the Philippine Taxpayers Union and it is affiliated with the World Taxpayers Associations, a movement now in 42 countries that grew "out of the desire of citizens to protect themselves from the increasing tax claims of the state." I think that is an excellent reason for citizens to band together. Taxes, after all, are forcible impositions made by those with power on those without it. From a historical perspective, these are qualitatively no different from the tong extorted from people by the ancient predatory bandits who called themselves kings. In fact, taxes can be effectively looked at as the goods that the productive members of the community are compelled to give up in order to support the lifestyles of a non-productive group of individuals sometimes called politicos.

Of course, in a modern democracy, taxes are supposed to be payments for certain support services – like maintaining order and administering the system of justice – performed by the politicos who capture control of government power. Accordingly, citizens are well in their rights to demand that the goods they are forced to give up is used in the proper manner and not used to enrich parasitic politicos who think that they are entitled to lavish compensation for what they imagine is productive work. From a practical standpoint however, citizens have no real power to make that demand – since politicos wield the coercive instruments and armed might of the state – and this is why it is necessary for individual citizens to band together to achieve the small modicum of power possible through concerted group action.

The WTA and its member associations like the PTU support initiatives that "limit tax burdens, prevent unjust harassment by tax collectors, and provide clear information about government taxation and expenditure." In a recent forum organized by Dr. Atienza, PTU Secretary-General Bienvenido Oplas Jr. presented a paper arguing for the abolition of income taxes and making consumption taxes the main source of government revenue. Principally, he argued that income tax collection is "very bureaucratic, discretionary, costly, and corruption-prone… (because) people do not want to divulge their true income… (and it is) cheaper to hire good accountants and lawyers and bribe revenue collectors than pay the full income tax liability." Additionally, Oplas argued that individuals and enterprises that engage in economic activities – by producing goods, services, and jobs – "already serve welfare functions in society… and they should not be penalized with income taxes and bureaucratic licenses and permits."

I agree completely. Taxes based on consumption are simpler to administer since these are collected from merchants and businesses which constitute a far smaller number than the number of individual taxpayers. Consumption taxes are also inherently fairer. The more you consume, the more taxes you pay. Moreover, this is more consistent with individual freedom because it allows each consumer to spend all that he earns in a manner that maximizes his satisfaction while still generating for the government the required amounts to fund support services. To address social welfare concerns, consumption tax rates can be set higher for non-essentials like cars and condos, and lower for essentials like food and medicine. Certain basic commodities like rice and galunggong can even be exempt from any consumption taxes whatsoever.

If one grants that the present national budget of some P1.1 trillion is a reasonable imposition on the producing classes of our society, then the required tax bite will amount to some 17% of the aggregate
value of goods and services produced domestically (assuming a GDP of around P7 trillion). The amount in tax take to be foregone from the abolition of personal and corporate income taxes – I believe this was around P881 billion in 2006 – can actually be drawn from various consumption-based taxes already being collected like value-added taxes, sales taxes, excise taxes, real property taxes, vehicle registration taxes, travel taxes, amusement taxes, and import duties. How this is to be distributed just takes a little arithmetic.

One might also argue however, as PTU does, that scrapping income taxes will actually expand the total tax base and therefore allow a desired tax take to be raised with not too high an increase in the prevailing rates of existing consumption-based taxes. The argument made is that zero income taxes will stimulate business investment, generate greater economic activity, and bring currently underground businesses (the so-called informal economy) out into the open. This can mean increased government revenues even with lower taxes per taxpayer. And there will be less corruption. In the end, this translates into faster growth for the economy as a whole.