* This is my column in BusinessWorld last week, May 24.

As incomes rise around the world, they tend to stay within cities, urban hubs, and rural areas on the cusp of urbanization. Congestion follows as a result, even if property developments are done vertically.

After searching for an international transportation or mobility index that includes Metro Manila or the Philippines, I found one made by the Arthur Little Consultancy. They developed the Urban Mobility Index, a point system with 100 points as the perfect score.

About 100 cities worldwide are covered. Surprisingly, Metro Manila has scored moderately and not in the lowest group of cities (see Table 1).

People may wonder why Metro Manila has ranked higher than Osaka or Sydney or Kuala Lumpur. Perhaps the surveyors and researchers covered only the EDSA area where a train — however cramped — exists and jeepneys and tricycles are banned. Vehicles move along at slow speeds during rush hours.

Disruption in urban mobility was first made by MRT/LRT a few decades ago. However, an increase in capacity was few and far in between, resulting in a persistent “transport crisis.”

The second round of disruption was made by vans and UV expresses, which help ferry passengers from high density locations and help them avoid taking multiple rides to their destinations.

However, this local initiative was restricted by the government via the LTFRB as it severely limited the franchising of UV express vehicles and heavily penalized vans that were “colorum (unregistered).”

A third round of disruption was introduced by a multinational company, US-based Uber. It was so successful, it inspired a regional competitor, Singapore-based Grab, to offer the same service.

Unfortunately, the LTFRB kept to its antiquated regulations, restricting the number of cars to serve both Uber and Grab. It later penalized Uber with a substantial fine.

Plagued with its own financial issues, Uber later decided to quit Southeast Asia and merge with Grab.

Meanwhile, actions of the LTFRB leave much to be desired.

Of the 19,000 Uber drivers, only 11,000 were absorbed by Grab since these were the only ones accredited by the LTFRB.

Some 6,000 former Uber drivers are still waiting accreditation and are unable to drive for Grab because they are not in the LTFRB master list while some 2,000 ex-Uber drivers have possibly given up (see Table 2). 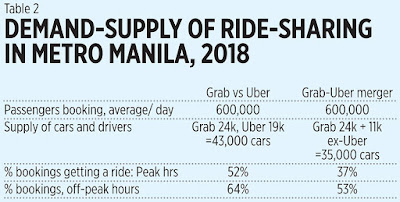 Grab Philippines Country manager Brian Cu brought this up during his presentation during the BusinessWorld Economic Forum 2018 on May 18 at Grand Hyatt Hotel, BGC in Taguig City. The forum’s theme was “Disruptor or Disrupted: The Philippines at the Crossroads.”

Ride-sharing and TNVS scheme are disruptors in urban mobility system and thousands of commuters have benefited. The LTFRB and government bureaucracy have disrupted this in their own way, resulting in increased inconvenience for TNVS passengers.

To this day, the LTFRB continues to control fares and cap surge pricing, a move that discourages drivers from getting incentives for picking up passengers even in inhospitable areas. This, despite the fact that the agency has already limited the number of accredited drivers, as discussed previously.

Providing comfortable, convenient, and safe transportation is not a crime and government has no business limiting this kind of entrepreneurship. Government should instead further expand competition, stay away from price and fare control, and allow commuters to have more choices.
---------------