Last Monday, I discussed business competition in general and the role of the Philippine Competition Commission (PCC).

The theme will be continued in this piece and it will discuss electricity competition in particular, especially after I was able to interview PCC Chairman Arsenio Balisacan, the CEO of the Philippine Electricity Market Corp. (PEMC) and Chairman of Transition Committee Oscar Ala and PEMC Spokesperson Atty. Nino Juan.

The Electric Power Industry Reform Act (EPIRA) of 2001 or RA 9136 has drastically liberalized the Philippines electricity sector with at least three important provisions: (1) deregulation and demonopolization of the power generation sector, (2) creation of the Wholesale Electricity Spot Market (WESM), and (3) liberalization and demonopolization of electricity distribution via Retail Competition and Open Access (RCOA).

With these and other provisions of EPIRA, the questions to ask, among others would be:

(1) Were there many private generation companies (gencos) that entered the market competing with each other?

(2) Were there many retail electricity suppliers (RES) that entered the market competing with each other?

(3) Were there many players, gencos and distributors, that use the WESM spot market competition? And more importantly, (4) Have electricity prices for consumers gone down?

The short answer is YES to all four questions.

For gencos for instance, before EPIRA, the National Power Corp. (Napocor) was the state-owned power generation monopoly, which also incurred huge losses and public debts for many years.

As of April 2018, there were 113 gencos in the Luzon-Visayas grid alone and all of them are WESM participants. Excluded are gencos in the Mindanao grid which is not part of WESM yet. Of these 113 gencos, five players have become more efficient and more moneyed than others, except perhaps the government-owned Power Sector Assets and Liabilities Management Corporation (PSALM), which still owns previous Napocor-owned power plants, mostly hydro facilities in Mindanao and the Malaya plant in Rizal.

For retail competition, the number of contestable customers (CCs) or those with monthly peak demand of 750 KW or higher and have the freedom to pick their own service providers — such as electric cooperatives (ECs) and private distribution utilities (DUs) — have increased. RCOA implementation however, has been issued an indefinite TRO by the Supreme Court in February 2017 and this resulted in a decline in number of CCs. 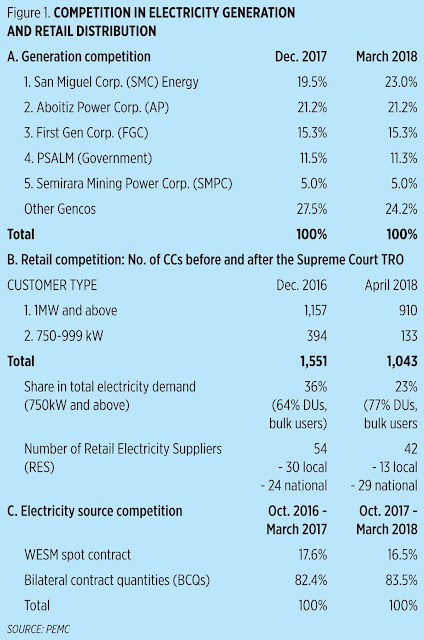 Here are the numbers for comparative electricity prices that include two types of customers, the captive market (small consumers who must stay with their DUs or ECs) and contestable market (they can leave their DUs or ECs and choose their own RES). 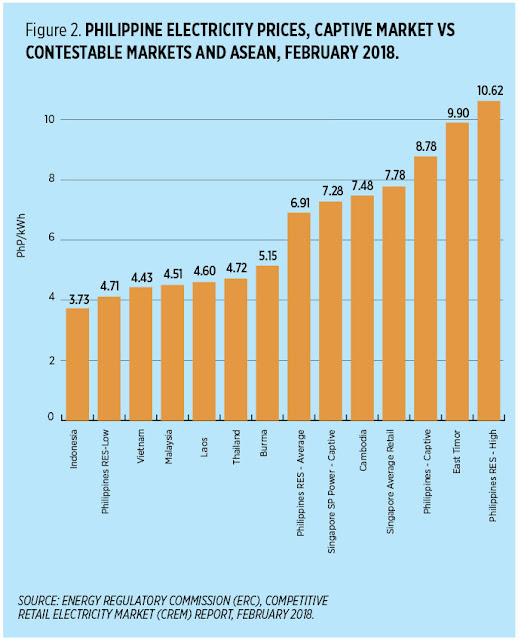 So there you see it.

Despite the noise created by certain sectors that EPIRA and WESM are not working, which leads them to call for a return to the old scheme of nationalization, these data show that indeed electricity competition is working.

It is true that Philippine electricity prices in general remain higher than most of our neighbors in the region but that is because of other factors like (a) many taxes especially the high VAT of 12% applied in all parts of the electricity supply chain, from generation to transmission, distribution and supply, even the system loss; (b) many charges in our monthly electricity bill including universal charge, system loss charge, feed-in-tariff (FiT) for favored renewables.

The transition of PEMC, the market operator of WESM, into a real Independent Market Operator (IMO) as explicitly specified in EPIRA may soon become a reality.


As a result, there will be no more government energy agencies and bureaucracies at the PEMC Board. Good work, PEMC Transition Team.
----------------