* This is my article in BusinessWorld on May 15, 2018. The chart is added here as it was not accommodated in the column due to space constraints that day.

Commodities competition as defined in this piece refers to companies that are producing certain commodities and are competing for investors. Thus, energy companies are those that plan to attract more investors and expand operations when world energy prices are high as compared to those companies producing agricultural, industrial, and other commodities.

This is a continuation of a series of pieces about competition.

Endless competition also leads to endless innovation and this results in disruption in global economic balance or imbalance, which, among others, would be discussed in BusinessWorld’s Economic Forum 2018 that carries the theme: “Disruptor or Disrupted? The Philippines at the Crossroads.”

Currently, energy prices especially oil are rising again as the supply from OPEC-Russia remains constricted and US shale oil production expands but insufficient to cope with high world demand. But this rise in energy prices do not represent disruption in the global energy balance yet.

I visited the Commodities section of Trading Economics, https://tradingeconomics.com/commodities, and checked which of the many commodities have “disrupting”prices over the last five years.

What is surprising is the eminence of certain metallic products.

Four commodities have incurred disruptive price hikes — cobalt, rhodium, palladium, and lumber. Zinc and lithium also have rising price trends but not as steep as these four. The rest of the commodities have up-down-up cycles, or declining prices like uranium. 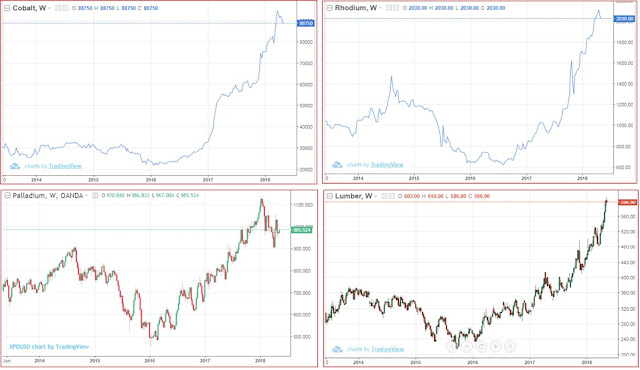 Cobalt is mainly used to produce high performance alloys and rechargeable batteries. Thus, companies producing batteries for mobile phones, electric cars, motorcycles and buses would be scrambling for limited cobalt supply in the world as Congo is the dominant supplier but politically unstable. Cobalt is found in copper and nickel ores and the Philippines is a major nickel producer in the world and an average copper producer.

Rhodium is a silver-white metallic element that is highly resistant to corrosion. Thus, it is mainly used in automobiles as a catalytic converter, changing harmful unburned hydrocarbons, carbon monoxide, and nitrogen oxide exhaust emissions into less noxious gases. It is found in platinum or nickel ores and other metals, and again, the Philippines is a major player in global nickel production and exports.

High lumber demand is experienced as there is a new trend in building construction using treated wood instead of cement and steel. Innovations in wood treatment allow them to be fire-resistant. Demand for “eco-friendly” packing materials and related products also experience rising demand.

And this brings us to the endless mining debate in the Philippines.

The trend is there — rising if not disruptive price hikes in many metallic products — so why make mining production highly politicized and bureaucratic? Why is that DENR circular that suspended or closed several mining companies issued by a former secretary who believes she can fly still not lifted until now?

Not content with bureaucratic licensing and monitoring of mining companies, mining excise tax has been doubled in the TRAIN 1 law of 2017 and there are moves to further raise this tax in TRAIN 2 bill now in Congress.

A better alternative for Congress would be to ban “small-scale” mining as almost all such mining actually use heavy equipment such as backhoes, bulldozers, and huge trucks. They should then be encouraged to pool their resources to become medium- to large mining corporations registered with SEC and subject to mandatory community projects as provided in the Mining Act of 1995.

Australia and Canada, among the biggest mining powerhouses in the world despite having major environmental NGOs, do not have “small-scale” mines that are harder and more time-consuming to monitor.

The Philippine government should be a partner and not a hindrance to more modern and responsible mining and allow us to take advantage of this upward trend in global metal prices.

The government should be an enabler of disruption, not a disruptor, in the clear potentials of metallic mining.
--------------