China Watch 28, Duterte sailing to PH Rise in the east when dispute is in the west

Dear Armed Forces of the Philippines,

As your naval units steam eastward at Benham Rise covered by your air assets and away from the main operational area of the West Philippine Sea towards the general direction of the United States of America, while led by your deranged commander in chief, let me just say that is the best example of an advance in the opposite direction.

Rest assured this masterful operation will result in hordes of Chinese dying....
...of laughter at the irony of it all.

The AFP is following the DDS -- Duterte Dishonesty in the Sea? There is no territorial dispute at the Benham/PH Rise, why should the President go there? The big territorial and political dispute is in the WPS/SCS, why not go there?

I think one answer is what Jose pointed out -- Du30 wants many Chinese communist leaders to die... of laughing.

In the two reports below, another friend from UP in the 80s, Prof. Jay Batongbacal of UP College of Law is quoted.

From PH Rise, Duterte urged to proceed to Panatag, WPS
Philippine Daily Inquirer / 07:04 AM May 12, 2018
http://globalnation.inquirer.net/166859/ph-rise-duterte-urged-proceed-panatag-wps? 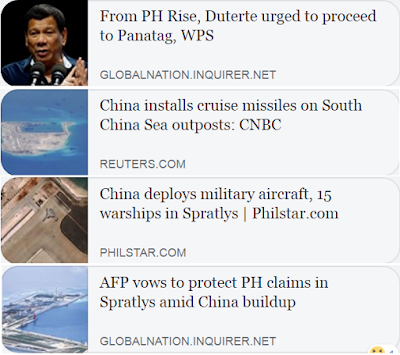 his pronouncement is weird. It should come from the AFP commander in chief (CIC), the President, not from the AFP chief of staff (COS).

The AFP cannot even patrol at the WPS/SCS because the CIC does not want them to go there, then the COS pronounces like that. Pang dyaryo/media epek lang. Ayaw ni CIC, ano magagawa ni COS? eh di mag press release na lang.

Classic case of a state not doing its function of protecting its own territory from a bully neighbor. In this case, the China communist dictatorial government. See this developed artificial island at Zamora Reef in the Spratlys, now fully controlled by China. Photo from the Inquirer. 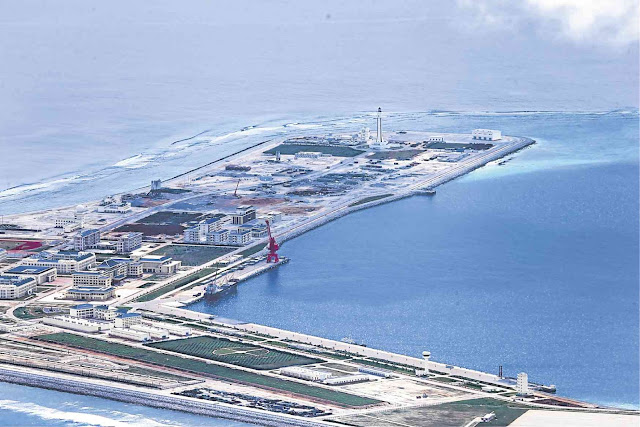