Disruptors tend to be successful in three ways: (1) They dramatically lower historic prices through new cost structures…”
— Accenture, “Disruption need not be an enigma,”
February 2018

Disruption is good for consumers. It unsettles many incumbent and entrenched players which may have been lording over the market for decades with expensive and substandard products and services.

Disruptors are often the newcomers, or old players using new and modern production methods that drastically change how things are done.

Inflation is immediately tamed by disruption, ceteris paribus or all other things being equal or held constant. Consumers are given new choices and they tend to flock to products and services with lower prices or similar prices but better quality or more add-ons.

The institutionalization of freer trade in 1995 with the creation of the World Trade Organization (WTO) has contributed to lower prices across many countries.

As a result, prices in Asia in 1995-1999 were significantly lower than prices in 1990-1994 except in Thailand and Indonesia which were badly hit by the Asian financial turmoil of 1997-1998. Then prices generally declined in the succeeding decades until 2017 (see Table 1).

Higher taxation and more government regulations however, have the opposite effect of market disruption. When a country imposes drastic tax hikes, that country experiences significant inflationary pressure and reverses the gains of disruption.

This is particularly true in the Philippines when it enacted the Tax Reform for Inclusion and Acceleration (TRAIN) law of 2017.

While all countries and economies were hit by rising world oil prices, many incurred even lower prices.

But in this case, the Philippines is an outlier.

Inflation jumped even after the sudden rebasing of the consumer price index (CPI) from 2006 to 2012. The two richest economies of North America and Europe are included to widen the scope of comparison, year to date (Ytd) vs. December 2017 as base year (see Table 2). 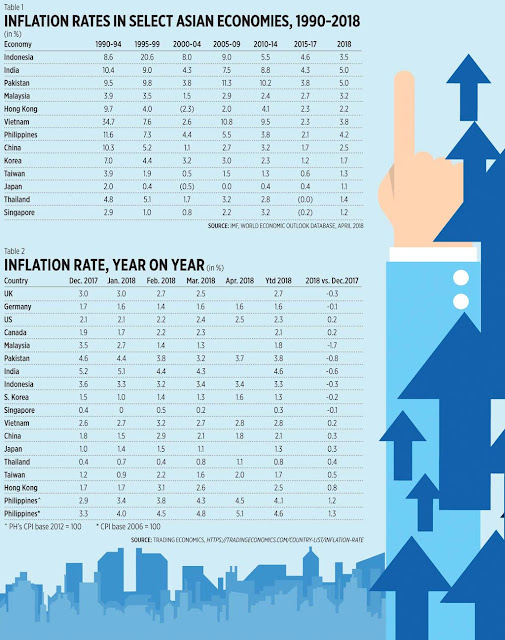 Note that the outlier inflation rate in the Philippines this year does not yet include fare hikes by land transportation companies and providers (jeepneys, taxi, UV express, buses). If such fare adjustments are granted — and they should be — then the country’s inflation will rise even higher.

Rice protectionism and NFA importation monopoly are also slowly being abandoned and the rice import quota will soon be replaced by tariffs and cheaper rice from our ASEAN neighbors will soon become more available to consumers and this will help reduce inflation.

The bad news is that January 2019 is fast approaching and there will be a second round in oil and coal tax hikes. This means another round of inflationary pressure, fare hike pressure, and even larger inflation spikes.

This is a clear case of higher taxation reversing the gains of innovation and disruption in the Philippines. Government as negative disruptor is not good. The TRAIN 2 bill should be an instrument to reverse these disagreeable provisions of TRAIN 1.