BWorld 209, Is the PCC a facilitator or a hindrance to business competition?

Even before the various competition bills in Congress ultimately became the Philippine Competition Act (PCA) of 2015 or RA 10667, I have been asking myself this question.

After all, I have observed that the main creator of monopolies and oligopolies is the government itself through constitutional restrictions on public utilities and creation of “natural monopolies” like electricity transmission and distribution, water distribution, which, in turn, require congressional franchises.

So the basic question would be: What can the Philippine Competition Commission (PCC) do to limit or curtail the granting of such state-created monopolies and oligopolies?

Last week, I interviewed PCC Chairman Arsenio Balisacan in his office. Sir Arsi is a friend and was my former teacher in the ’90s at the graduate program of UP School of Economics on the subject of Development Economics. [The discussion between Mssrs. Oplas and Balisacan, which covered several topics, will be uploaded on BusinessWorld’s YouTube channel soon. — Ed.]

My opening question to him was a light one, “Do many people mistake the PCC with a racing or sports commission?” He smiled and answered that it seems to be a common misconception for many people especially in non-urban areas, they ask what sports competition the PCC is promoting.

I checked the latest report of the World Economic Forum (WEF), the Global Competitiveness Report (GCR) 2017-2018, to see how competitive the Philippine economy is and by extension, the domestic private businesses, compared to its neighbors in East Asia.

Out of 137 countries and economies covered, the Philippines ranked 56th overall. And of the 12 pillars of the GCR, the Philippines scored high in pillar #2 Macroeconomic environment (22nd) and pillar #10 Market size (27th). 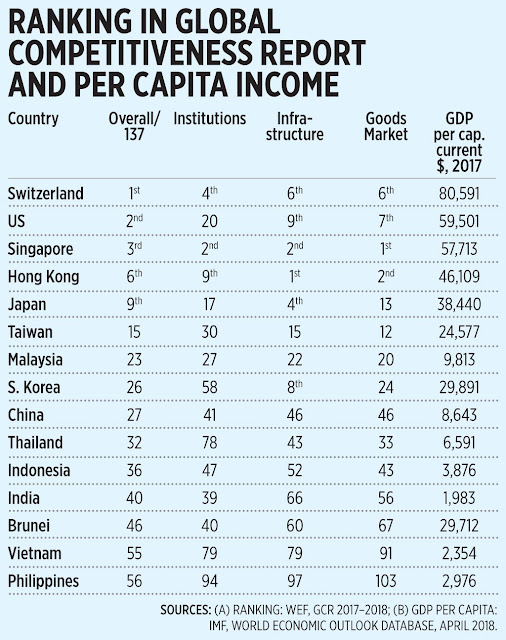 There is a direct relationship between a competitive economy and its prosperity, and given the relative smallness of the Philippine economy, what seems to be “big” corporations domestically can be small or medium-size compared to the corporations in our East Asian neighbors.

The PCC checks and prohibits three major acts and behavior: (1) Anti-competitive agreements like price fixing/collusion, bid rigging, output limitations, and market sharing; (2) Abuse of dominant position and market power like predatory pricing, discriminatory pricing, exploitative behavior towards consumers and competitors, and limiting production, markets or technological development; and (3) Mergers and acquisitions (M&A) that restrict or lessen competition in the market.

These point to two important issues.

One, the PCC is concerned only with behaviors of existing competing players but does not cover behaviors of state-created monopolies.

And two, many of those behaviors rendered “anti-competitive” are generally short-term and never long-term, so the imposition of penalties may be a question mark.

Take price discrimination or “price differentiation” and “market segmentation” in economics. This is perfectly normal in market competition as the supplier is optimizing revenues from customers with different needs and different budget or resources. Thus, higher prices are set for those deemed wealthy and lower prices for those financially struggling.

In price fixing/collusion, players here may be digging their own graves as they antagonize customers and invite new players that can quickly provide the goods and services at lower prices. If this happens, the collusion can quickly break up and the old players would try to secure their previous market share eaten by the new player/s.

Competition requires innovation, lots of it in terms of product and service quality, variety, marketing and pricing. Player X’s prices compared to its competitors would look “predatory” yesterday, “collusive” today, and “excessive” tomorrow and these are all fine. Those prices can roller coaster at temporary and short-term durations. New players would tend to give low introductory prices to attract many new customers while innovators would tend to give high prices to recoup their high investments in product R&D, consumers survey, and marketing/promotions.

According to the WEF Executive Opinion Survey 2017, the “Most problematic factors for doing business” in the Philippines are: (1) Inefficient government bureaucracy, (2) Inadequate supply of infrastructure, (3) Corruption, (4) Tax regulations, (5) Tax rates, and (6) Policy instability.

So, is the PCC a facilitator or hindrance to overall business competition in the Philippines?

The PCC can be a potential hindrance because its long list of prohibitive acts can be additional deterrent to potential players that are already wary of the corrupt bureaucracy, government-created monopolies, poor infrastructure, high tax rates, and policy instabilities.

But it also has two important functions that can facilitate competition.

One, it gives information to potential and incoming players on how they will be treated in case existing players, foreign and local, will charge and accuse them of “anti-competitive” behavior. And two, it can coordinate with other sectoral regulatory agencies and temper their itchiness to regulate, restrict and prohibit as PCC has the overall view of the degree of competition in the country.
-------------