Some not-so-good news for the subsidize-renewables and  climate alarmism movement. 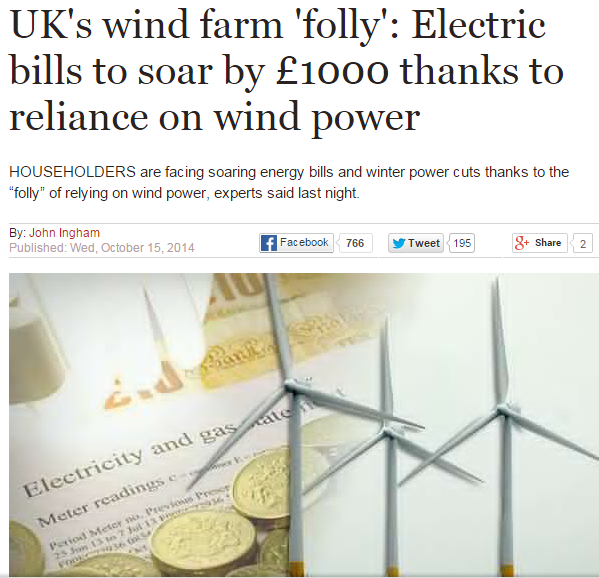 The green crusade of successive governments is set to double electricity bills for households and cost homes £26 billion a year by 2030, it was claimed yesterday.

"The cost of renewable energy and carbon taxes will put an extra £983 a year on household bills by then, compared to relying on a mix of nuclear and new gas-fired power stations, three experts told a Lords committee.

They also said the “foolhardy” green policy will do little to cut emissions of the greenhouse gases blamed for global warming.

The Scientific Alliance report highlights warnings by the regulator Ofgem that the margin for electricityproduction for the 2015-16 winter will be at an all-time low of 2 per cent compared to the pre-privatisation requirement of at least 20 per cent.

It means that in times of high demand, such as during very cold weather, Britain would be at risk of power cuts."

The alliance argues that wind power – which is the main renewable energy source depended on by Government – is unreliable. 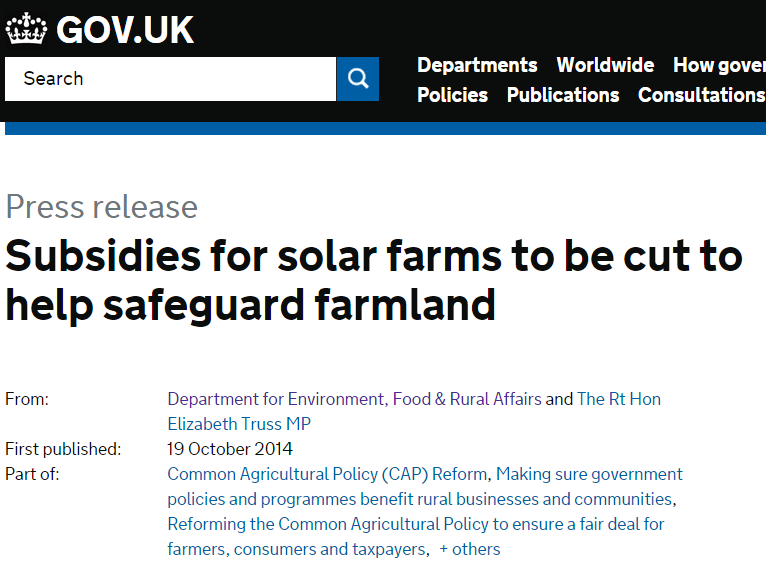 The subsidy change will also save up to £2 million of taxpayers’ money each year that won’t be available for these subsidies. The reform follows other government measures designed to end support for solar farms in agricultural fields. The Department for Energy and Climate Change recently announced that renewable energy subsidies for new large-scale solar farms will end next April....

The changes the government is making are expected to slow down the growth of solar farms in the countryside in England. There are currently 250 installed, with the biggest covering as much as 100 hectares. Under previous plans, the number of fields dedicated to solar farms was set to increase rapidly, with over 1,000 ground-based solar farms expected by the end of the decade across the UK. 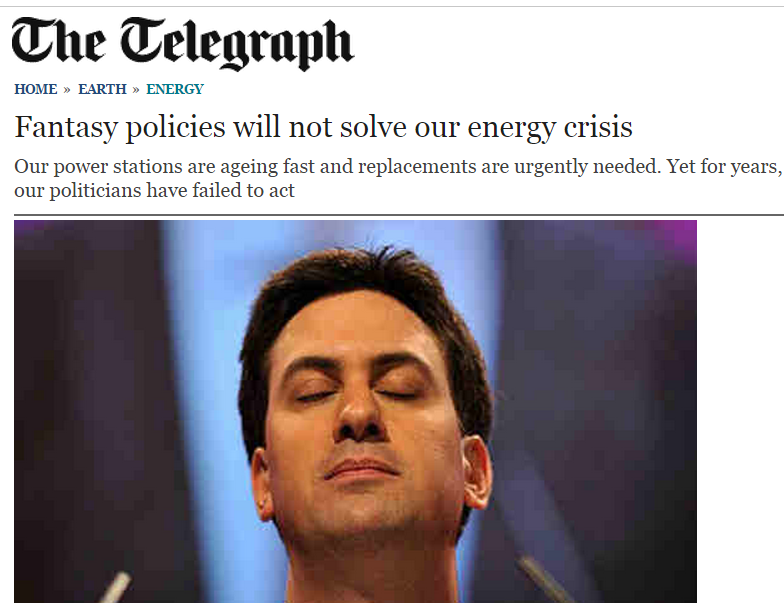 Our power stations are ageing fast. We have eked out their lifespan for longer than expected, but replacements are urgently needed. Yet for years, our politicians have failed to act, promoting costly and over-subsidised renewables rather than building new gas or nuclear plants. To make matters worse, much of our capacity has been scrapped, in compliance with environmental restrictions set in Brussels.

If things continue as they are, the prospect has been raised of Seventies-style restrictions on energy use, even rolling blackouts. That is a grim prospect for a 21st-century economy.... 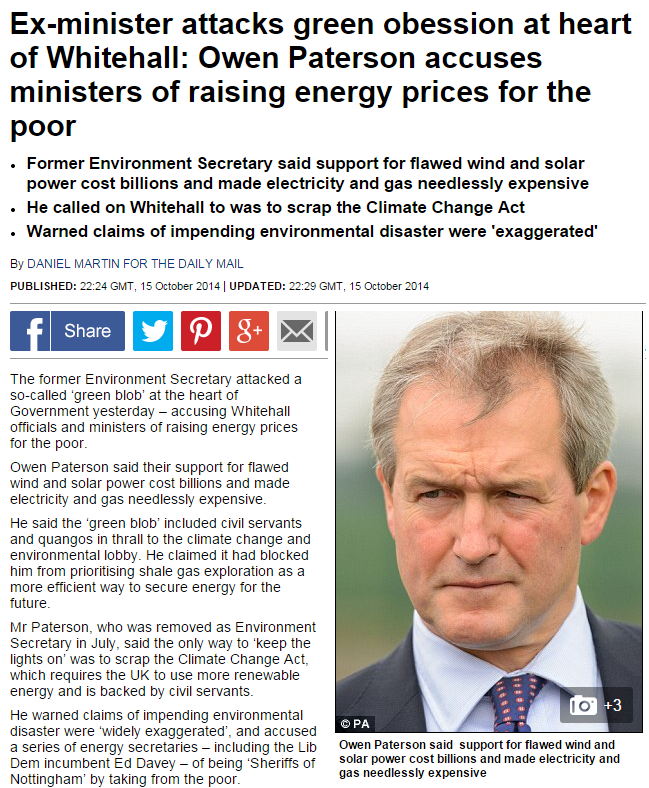 He called on Whitehall to was to scrap the Climate Change Act.

He warned claims of impending environmental disaster were 'exaggerated'. 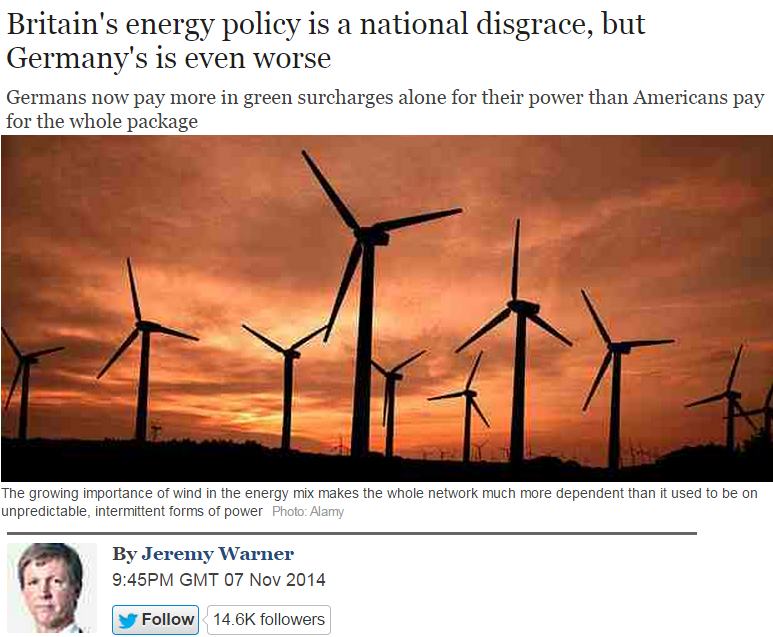 In a shocking assessment, National Grid last week said that Britain’s cushion of spare generating capacity had sunk to just 4pc, down from 17pc three years ago and its lowest level in five years. And that’s despite a series of emergency measures, including incentives to business to use less power, to deal with the looming blackout problem.

That a country of Britain’s size, status and relative prosperity is running such risks is a quite shocking state of affairs. There is admittedly some justification in Mr Davey’s excuse – that this is largely the fault of the last lot, and particularly the disastrously inadequate and idealistically minded energy policy run by our now friendless Labour leader, Ed Miliband. Replacement, base load generating capacity takes a long time to build, and it should have begun a long time ago. 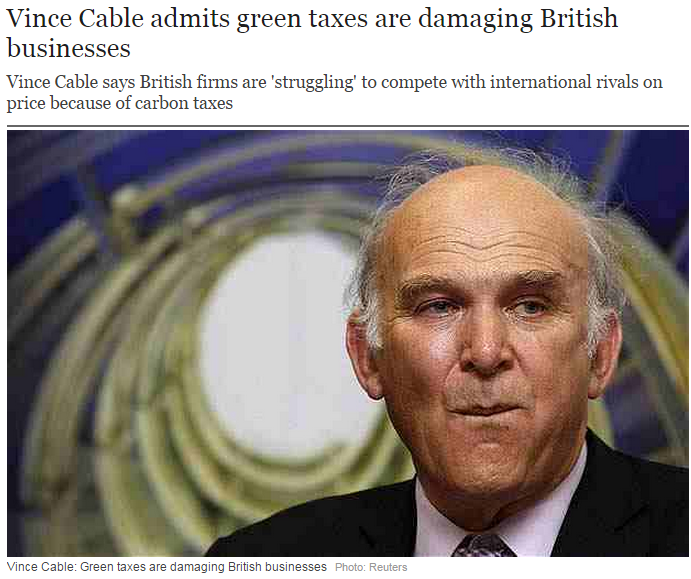 Green taxes on energy are undermining British businesses by imposing costs which are not faced by international competitors, Vince Cable has said.

The Business Secretary admitted that a compensation scheme for heavy industry introduced by the government in 2011 is failing to "go the whole hog" and redress the balance. He said that British firms are "struggling" to compete with their international rivals on price, which is leading to work going abroad.

"Many of our manufacturing companies and exporters – particularly in areas like steel and cement and others which consume lots of electricity – are struggling against international competition because of the cost of energy.

"They will argue that because we are trying to be green we are imposing costs on them which their competitors don't have.

The Germans, the British, "they are prepared to make sacrifices to address", including suffering some health and overall diswelfare. 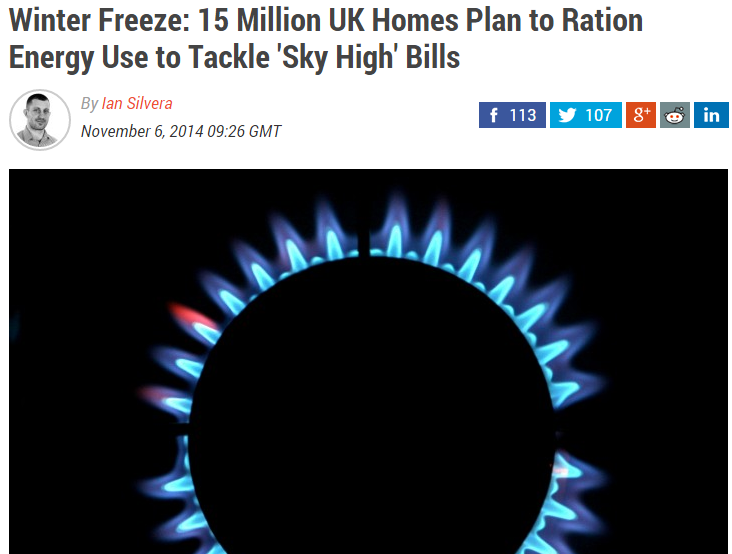 More than 15 million UK households plan to ration their energy use this winter to cope with "sky-high" energy costs, according to uSwitch.

The price comparison website, which surveyed 5,300 people, found that almost six in ten (57%) people have already cut back or plan to ration theirenergy use this winter in a bid to reduce bills.

The research also revealed that more than a third of people (36%) who rationed their energy last winter said it affected their health and wellbeing.

"In this day and age it's shocking to see so many being forced to go without heating and risk their health, simply to cope with high energy bills," said Ann Robinson, director of consumer policy at uSwitch. 
Subsidies that will cost households £14 a year and hand energy companies windfall profits to keep the lights on will be “challenging to defend politically”, a credit rating agency has said.

Companies will receive the payments to stop them closing power stations, even though in many cases they would remain open anyway.

Moody’s suggested that politicians could scrap the capacity market subsidy scheme if there is another backlash against green energy levies.

The agency said in a report: “While for a few plants, the capacity market may make thedifference between closing and staying open, the concept and cost of paying many other already economic plants even when they are not running may be challenging to defend politically in the context of the recent debate around the affordability of energy bills.” 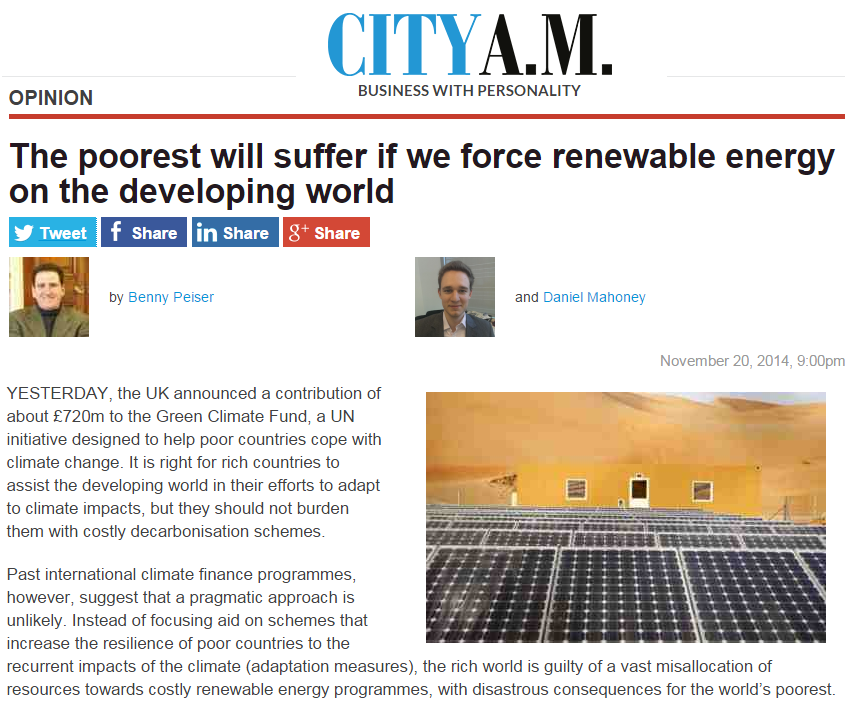 
By promoting expensive forms of electricity – and discouraging cheaper forms, as the World Bank has done by, for example, refusing to finance coal-fired power plants – the West is burdening poor countries with the most expensive ways of generating power. The growing fleet of renewables in Europe, particularly in Germany and the UK, is leading to an increase in fuel poverty. Such an approach would be even more damaging in poor nations, which desperately need cheap and reliable energy and growth to alleviate poverty.