The Economic Freedom Network (EFN) Asia 2014 Conference started today at the Harbour Grand Hong Kong. Nice venue, great forum with great speakers, and many participants from Asian countries, from the US, Canada and Germany. The event is jointly sponsored by the Lion Rock Institute (LRI) in HK, EFN Asia in Bangkok, and the Friedrich Naumann Foundation for Freedom (FNF) in Berlin Potsdam, Germany. 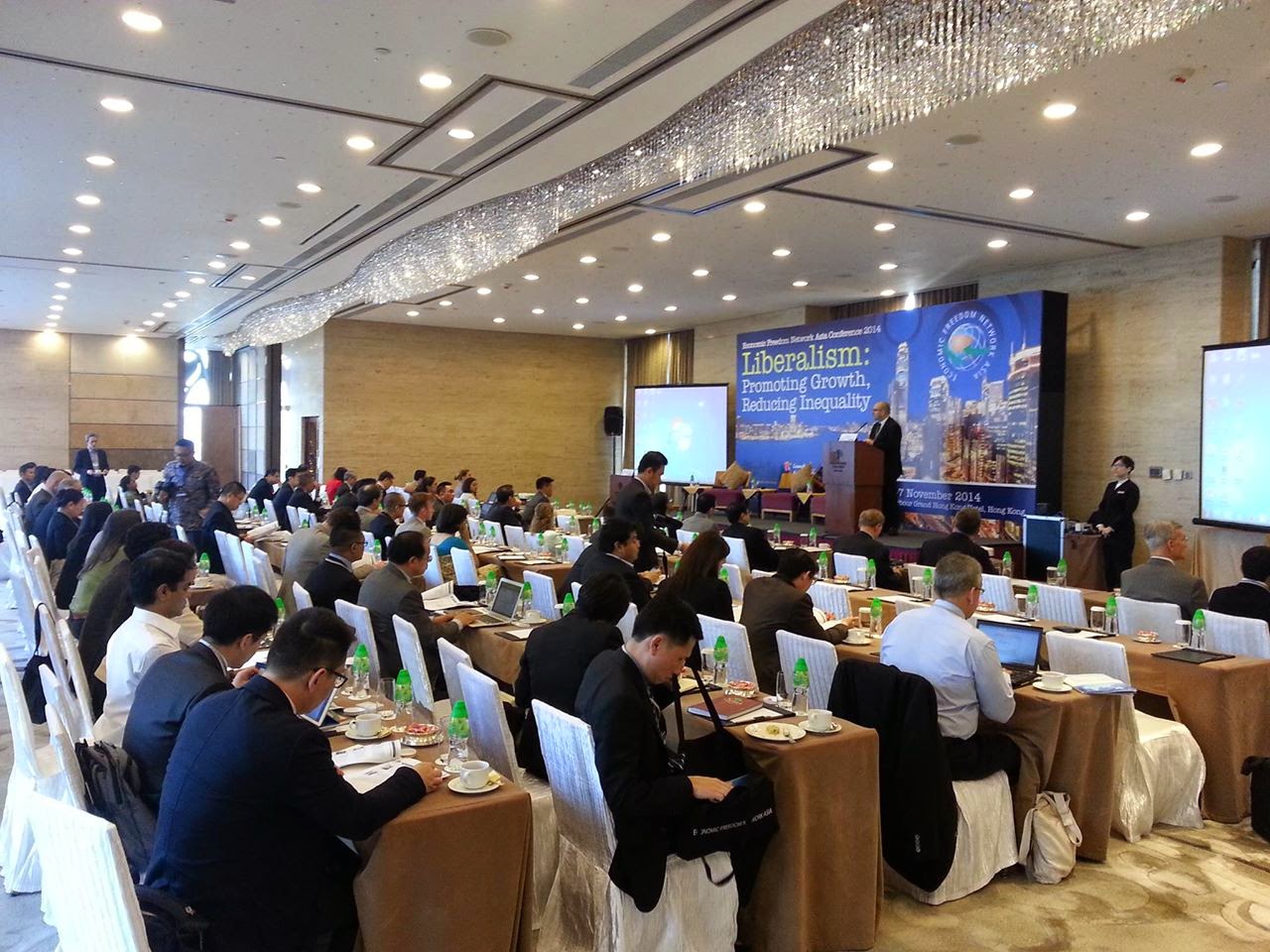 Opening and Welcome Addresses were given by Bill Stacey, Chairman of LRI, and Siegfried "Siggi" Herzog, the new FNF Regional Director for East and Southeast Asia. Below, Siggi giving the welcome message. 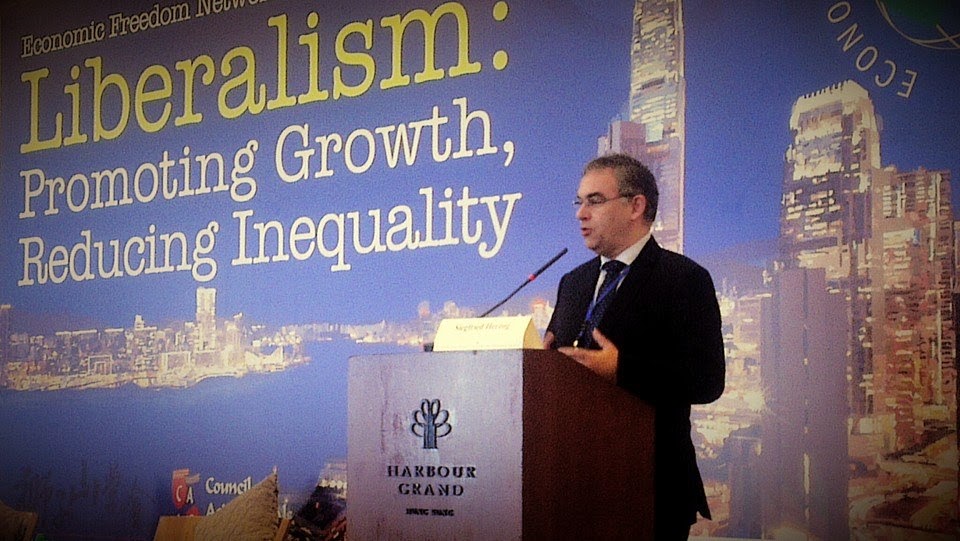 The MC for the day was Wan Saiful Wan Jan of IDEAS Malaysia. From the Philippines, there are five of us here -- Dr. Vic Abola of  the Philippine Economic Society (PES), Tony Abad and Rhea Lyn Dealca of the Foundation  for Economic Freedom (FEF), Narwin Espiritu of FNF Manila, and me. FNF Philippines Country Director Jules Maaten arrived late today as there are a number of FNF activities in Manila until yesterday. 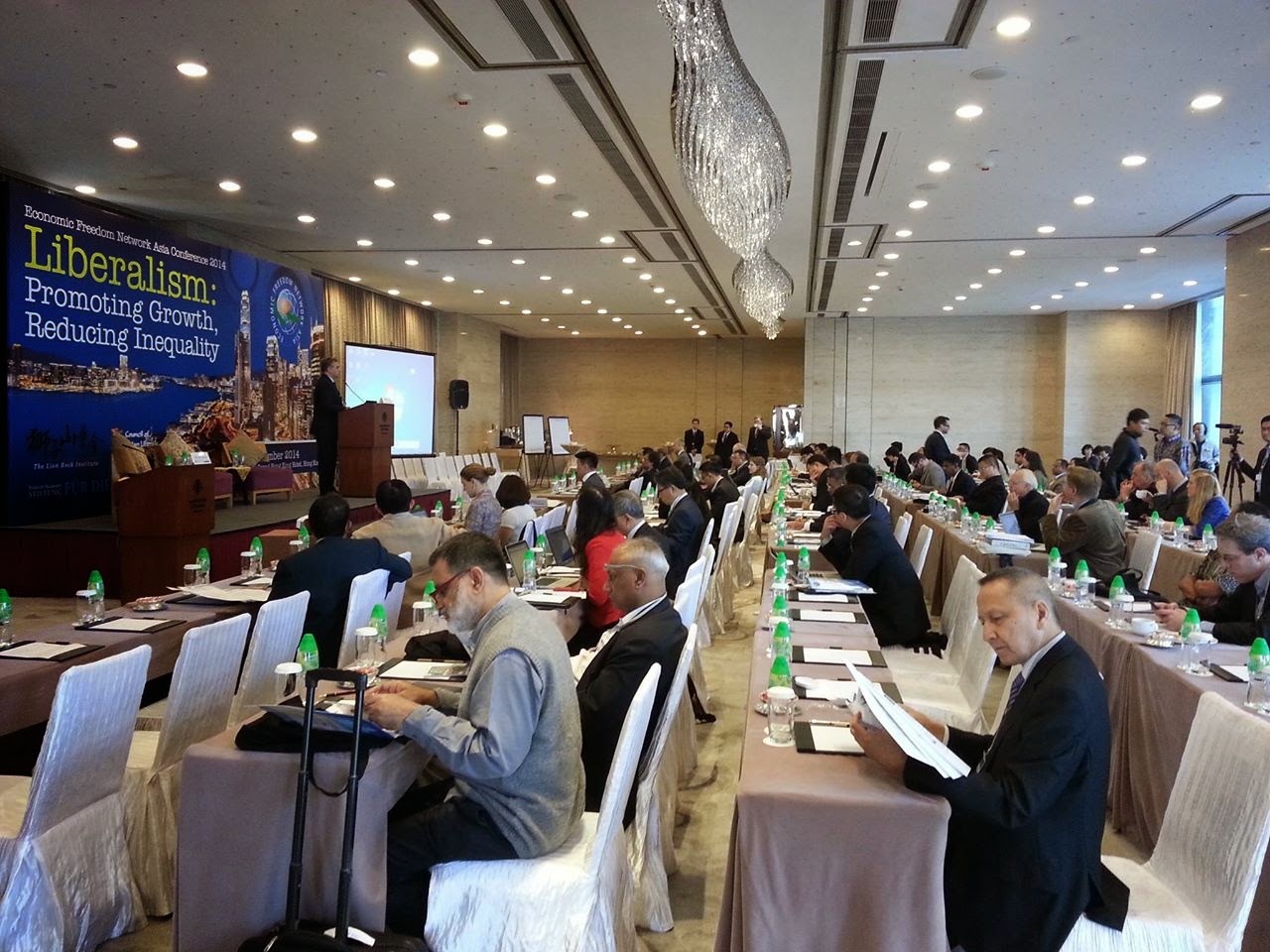 Dr. Razeen Sally delivered the Keynote Address, "Capitalism in Asia: Economic Growth and Inequality". Very articulate and clear defense of capitalism or market economy, innovation, competition, mass production and rising standard of living of the people in many parts of the planet. He concluded his speech with good and bad news.

The good news is that the world and its people today are much wealthier, healthier, higher economic freedom, mature institutions, compared to the people a century or many decades ago. The bad news is that governments almost anywhere are getting more interventionist and bureaucratic, often with no distinction between macro and micro, meaning even micro (community, firm, household and individual) levels are being monitored and regulated (micro-management). 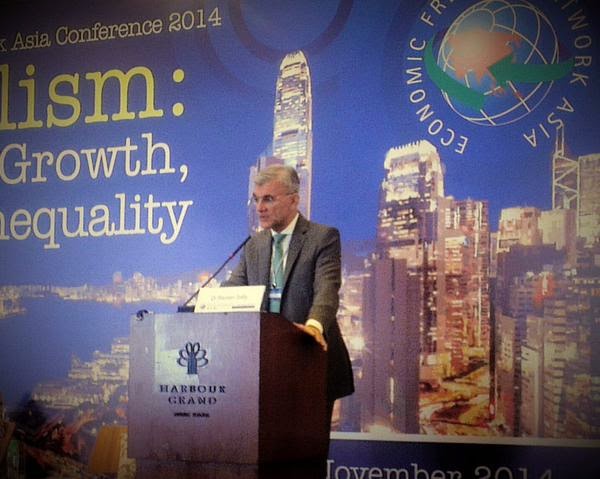 Two distinguished reactors followed. Parth Shah of the Center for Civil Society (India) and Choi Byung-il of Ewha Woman's University (S. Korea) gave their thoughts on the subject of growth and inequality, while LRI Chairman Bill Stacey (middle in this photo) was the moderator. 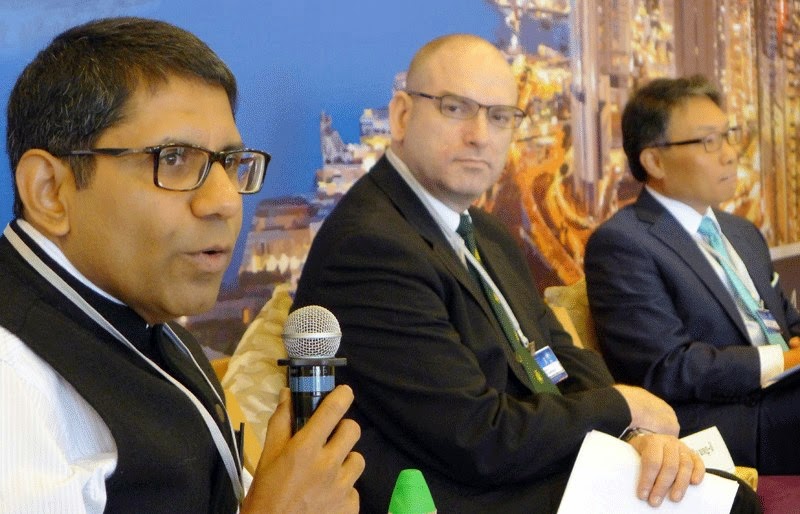 I met a number of old friends whom I met last time about four or five years ago. Like Neena Moorjani, now with the Asian Trade Center in Singapore, andArpita Nepal of Samriddhi-Prosperity Foundation  in Kathmandu. Below, a group photo of participants from South Asia (India, Pakistan, Bangladesh, Sri Lanka,...) 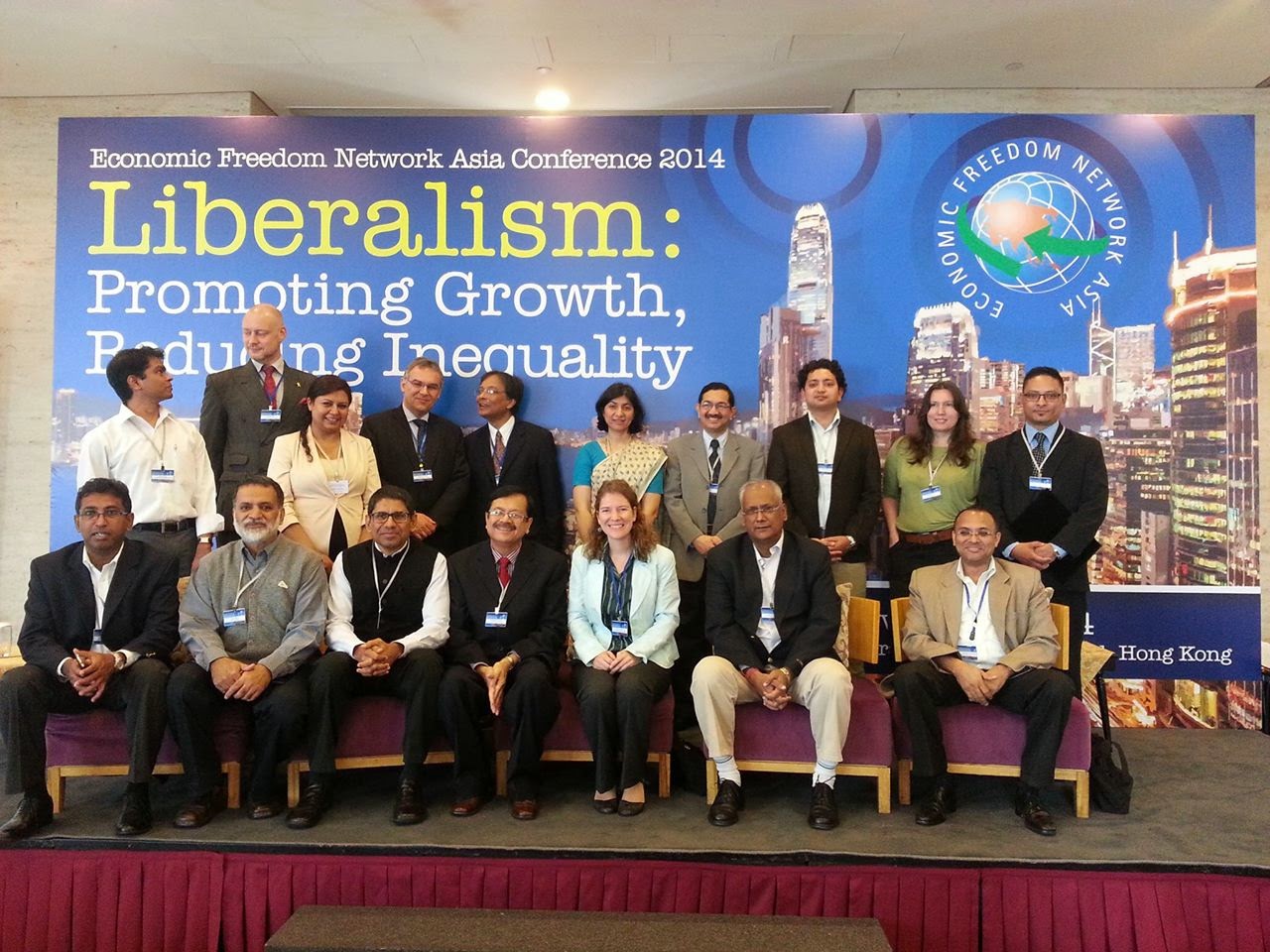 The next round was the "Asian Cafe". Participants moved around in 5 groups representing 5 Asian economies and a resource speaker from each country gives a brief discussion about their country and the state of growth and inequality there. Here, Peter Wong (right, facing the audience), Exec. Director of LRI, spoke about HK. Many of the questions were about the protests by the "Umbrella Movement" or "Occupy Central" movement. 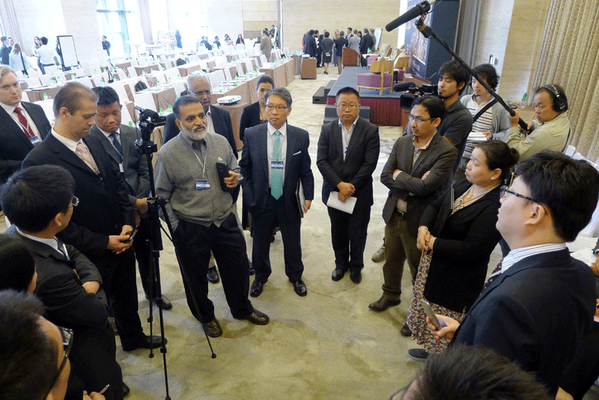 The last panel in the afternoon was about "Property Rights and Equality". Below, Lorenzo Montanari of the Property Rights Alliance (PRA) and Americans for Tax Reforms (ATR) in Washington DC, briefly discussed about the result of the International Property Rights Index (IPRI) 2014 Report. 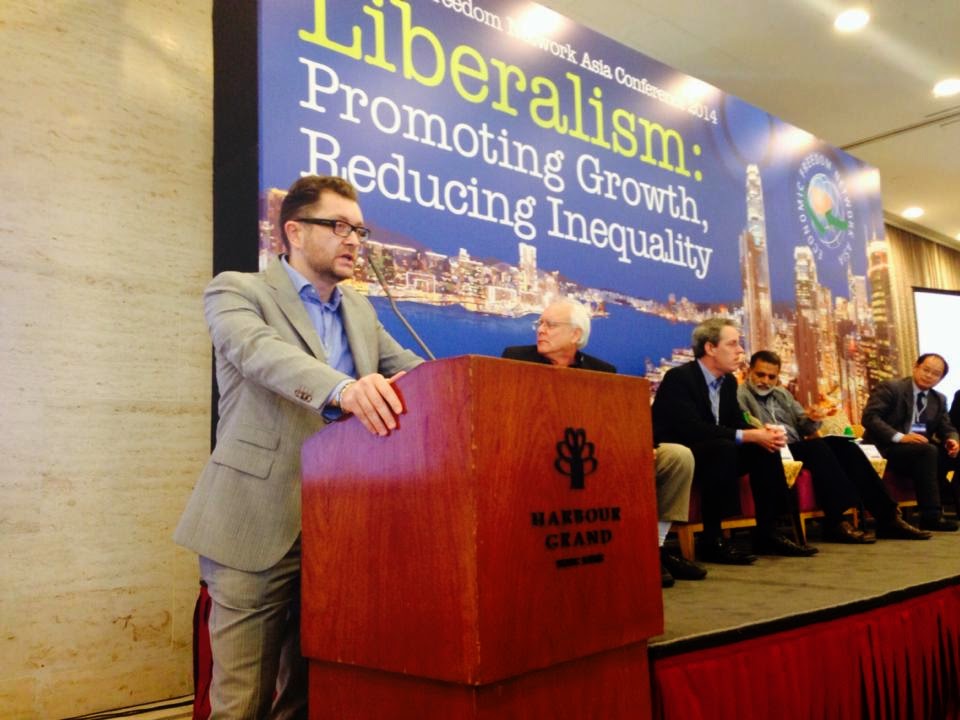 The panel moderator and speakers in that session were, from left: Ken Schooland of Hawaii Pacific University, Andrew Work, co-founder of LRI and currendly editor-in-chief of the Harbour Times, Barun Mitra of Liberty Institute in  India, Michael Feng of CASS/Unirule Insitute in China, and Thitinan Prongsudhirak of the Institute of Security and International Studies in Thailand. 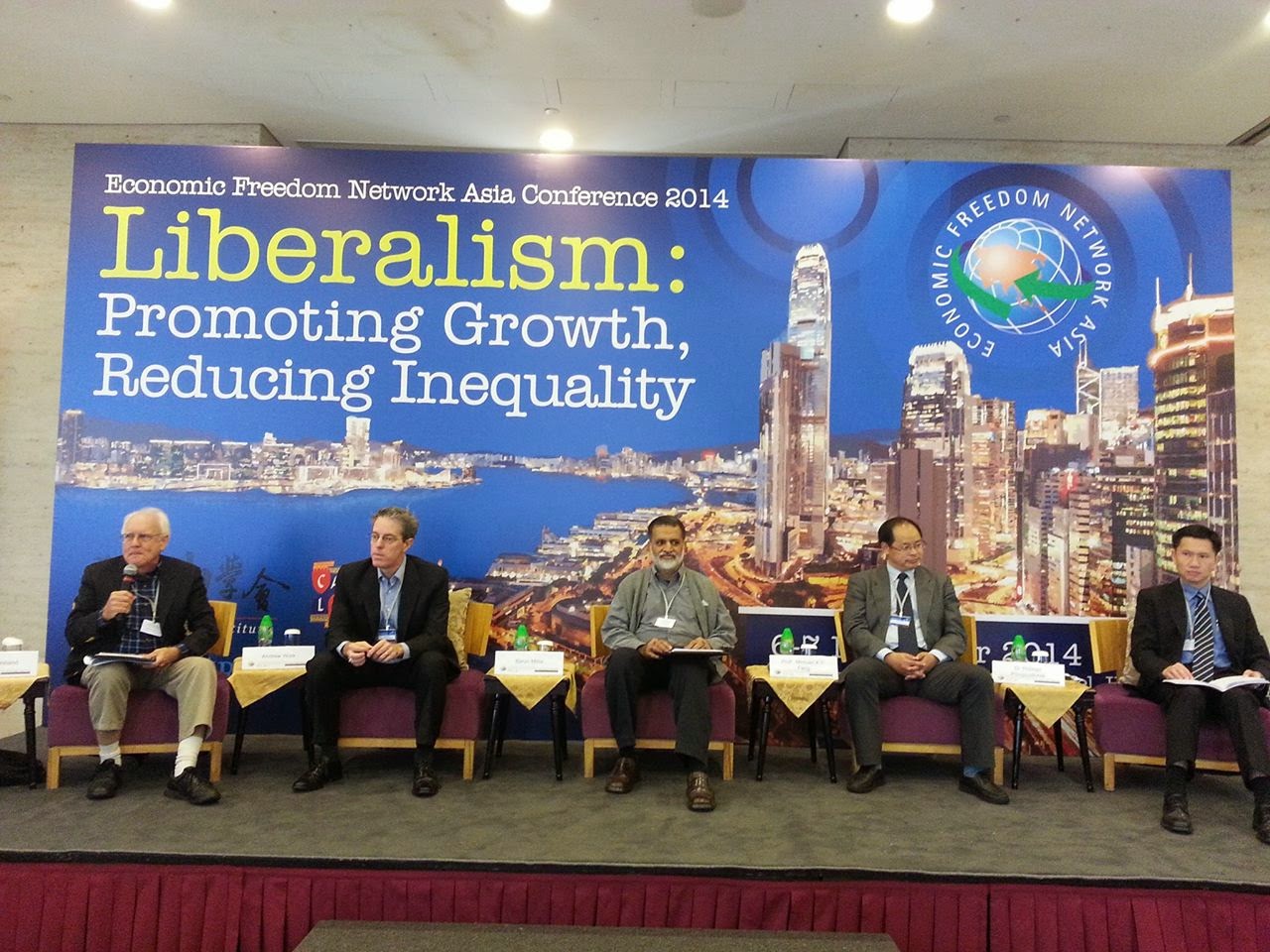 Many insightful ideas from the four speakers. We adjourned about 4pm, and we go back at 6pm for the cocktails and later, dinner program. Fred McMahon of Fraser Institute (Canada) will discuss the result of the Economic Freedom  of the World (EFW) 2014 Report. Then HK's Finance Secretary John Tsang will give a Keynote Address during dinner.

An after dinner program will be held in  honor of LRI's 10th Anniversary.
Photo credits -- from Jadranko Brkic, FNF S and SE Asia, Olaf Kellerhoff, Lorenzo. Thanks.