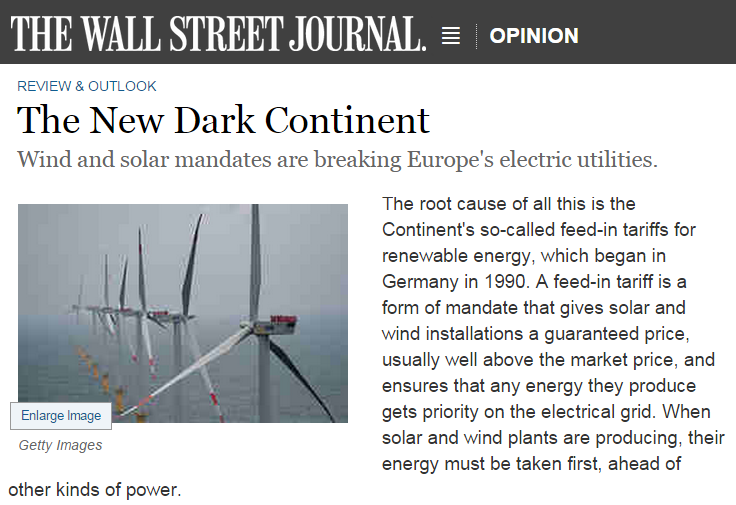 Last week the CEOs of Europe's 10 largest utilities finally cried uncle and called for a halt to wind and solar subsidies. Short of that, they want subsidies of their own. They want to be paid, in essence, not to produce power.

The root cause of all this is the Continent's so-called feed-in tariffs for renewable energy, which began in Germany in 1990. A feed-in tariff is a form of mandate that gives solar and wind installations a guaranteed price, usually well above the market price, and ensures that any energy they produce gets priority on the electrical grid. When solar and wind plants are producing, their energy must be taken first, ahead of other kinds of power.

By requiring utilities to take this power—and requiring consumers to pay for it—Germany has increased renewables to 25% of its overall capacity. Berlin wants to push that to 35% in 2020 and 80% by 2050. Not every country in Europe has been as ambitious as Germany, but the European Union's renewables target across the entire Continent is also 20% by 2020. 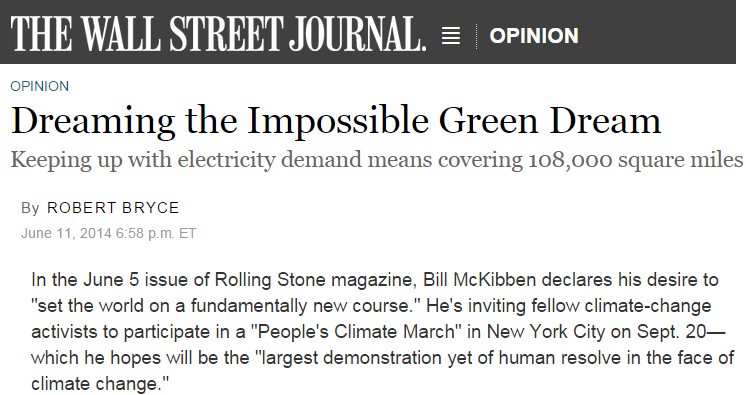 Wind? Merely to keep pace with the global growth in electricity demand would require the installation of about 280,000 megawatts of new wind-energy capacity every year. According to several academic studies, the areal power density of wind energy—that is, the amount of power that can be derived from a given amount of land—is about one watt per square meter. This means that installing the requisite additional wind capacity would require covering about 280,000 square kilometers (108,000 square miles of land)—an area nearly the size of Italy—with wind turbines, every year. (For comparison, the areal power density of nuclear power is more than 50 watts per square meter. The productivity of oil and gas wells vary, but even marginal wells have power densities of about 27 watts per square meter.)

Germany will continue to need coal-fired power plants, its energy regulator said, warning that Europe's biggest economy should not rely solely on renewables or risk increasing exposure to Russian gas as it shuts down nuclear plants.

"Those who call for an end of coal power generation don't have much interest in a reliable energy policy," Jochen Homann, president of the Federal Network Agency (BnetzA), told an energy industry conference on Wednesday.

"We will close further nuclear plants; these capacities need to be replaced," he said, adding that coal power was vital to achieve this… 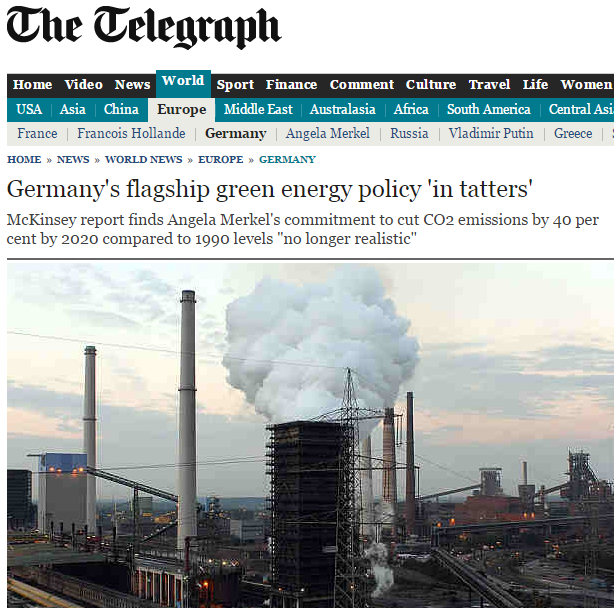 Germany's flagship green energy policy is in tatters, according to a new report by the consultancy firm McKinsey which says many of its goals are "no longer realistic".

A major factor in the failure to achieve targeted cuts has been Germany's increased use of "dirty" brown coal, or lignite, to make up the shortfall in power generation caused by its decision to phase out all its nuclear power stations by 2022.

The aim is replace nuclear energy with renewable sources, such as solar and wind power, but they have not yet been able to plug the gap, and the McKinsey report says that while solar energy is on track, the country is behind schedule in developing wind power. 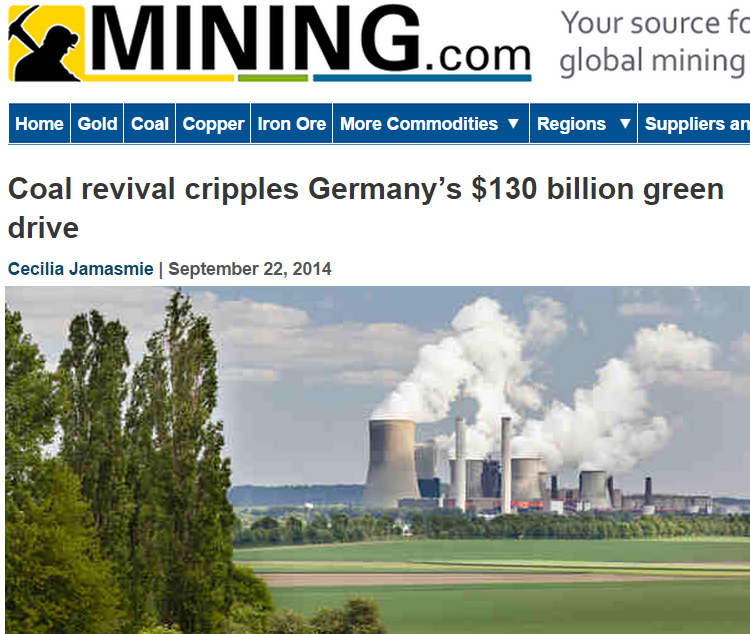 Only last year the share of electricity generated from coal in Europe’s biggest economy hit the highest in 24 years. The country also opened more coal-fired power plants in 2013 than any other time in the past 20 years as it moves towards a target set three years ago, which aims to have all nuclear power stations shut down by 2022.

Germany’s energy revolution —or “Energiewende”— has come at a high price.According to Bloomberg, it has so far added more than $134 billion (100 billion euros) to the power bills of households, shop owners and small factories.

But falling coal prices seem to have wet the government’s appetite for the fossil fuel, to the point that Chancellor Angela Merkel’s governmenthas recently announced it considers coal-based power plants as “indispensable” for the foreseeable future. 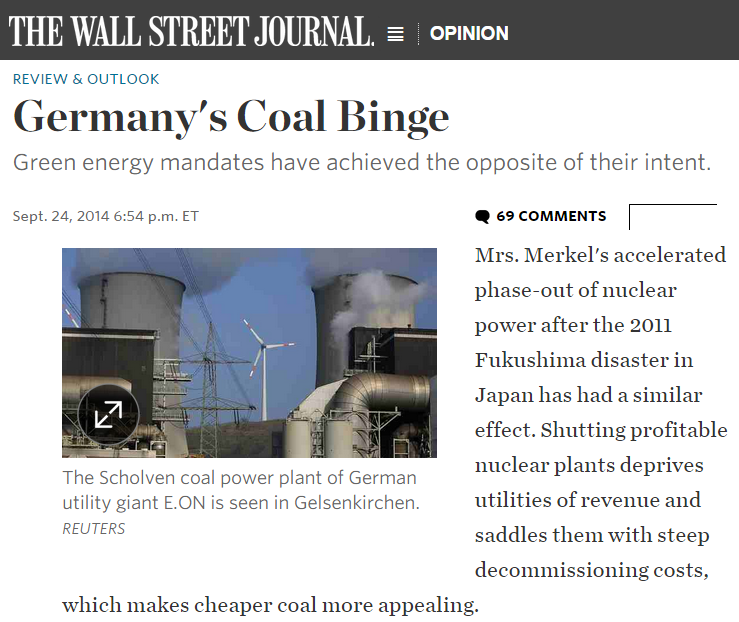 Berlin’s “energy revolution” is going great—if you own a coal mine. The German shift to renewable power sources that started in 2000 has brought the green share of German electricity up to around 25%. But the rest of the energy mix has become more heavily concentrated on coal, which now accounts for some 45% of power generation and growing....

Greens profess horror at this result, but no one who knows anything about economics will be surprised. It's the result of Chancellor Angela Merkel 's Energiewende, or energy revolution, a drive to thwart market forces and especially price signals, that might otherwise allocate energy resources. Now the market is striking back.

Ordinary Germans foot the bill for these market distortions, having ponied up an estimated €100 billion ($129 billion) extra on their electricity bills since 2000 to fund the renewable drive. The government estimates this revolution could cost a total of €1 trillion by 2040. 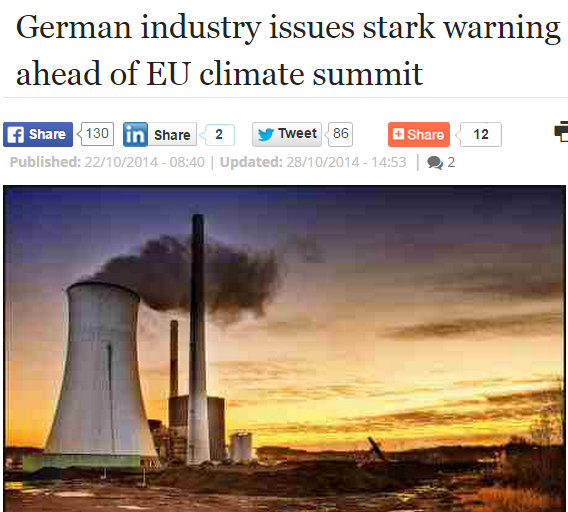 German companies are concerned about the extra burden they fear will come with a new, higher climate protection target for 2030.
Utz Tillmann, a spokesman for the Energy Intensive Industries of Germany (EID) - which includes chemicals, steelmaking, cement and others - said he supported an ambitious agreement at the Paris UN climate summit in December next year. 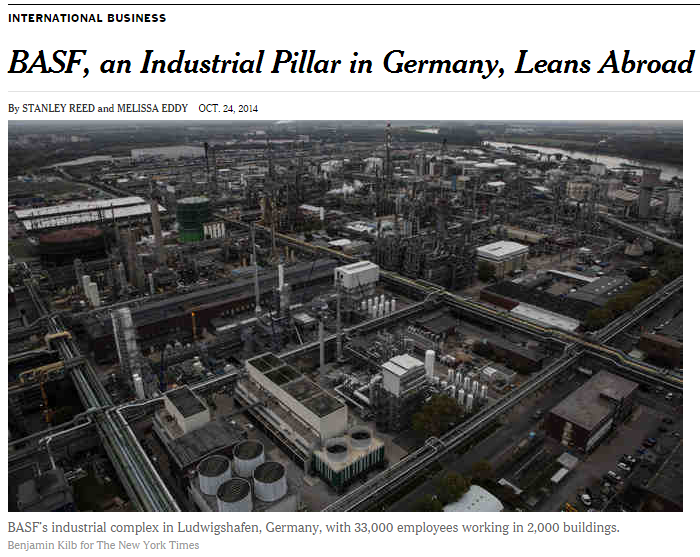 BASF executives say that German and European Union policies toward industry, particularly when it comes to energy, are forcing big companies to look elsewhere as they seek to expand.

Energy is perhaps BASF’s biggest cost. Tremendous amounts of electricity are required to produce chemical raw materials like ethylene, propylene and butadiene for a range of products like plastics, pharmaceuticals and rubber. And oil or natural gas are the basic feedstocks from which these chemicals are produced.

Especially in Germany, energy prices have jumped as a result of the government’s big push for renewable energy sources...

Gabriel, who is also head of Germany’s SPD socialist party and has strong ties to trade unions, also told the GP protesters:

Afterwards I’ll be at the Estrel-Hotel to meet with the Union Councils of Vattenfall, who are fighting to keep their jobs in brown coal. My suggestion is: See if you dare to show up over there.”

At the end Gabriel again requested the activists to “stop simplifying everything … if we continue on this course, where we keeping pushing illusions and in the end wind up with high electricity rates, that is the only way of getting the energy transformation to fail.

The only German plant that produces battery cells for electric cars will be closed. The company Li-Tec in the German state of Saxony will produce batteries only for one more year. Daimler Manager Harald Kroger told Spiegel that the current production numbers make it far too expensive to produce the batteries.”

Daimler was banking on higher production numbers, which are necessary for producing economically. But the quantities never materialized. Kroger told Spiegel that the company realized that “an automaker does have to produce the batteries itself.
-----------