I am attending here the official launching of the ASEAN Prosperity Initiative (API) today at Intercontinental Singapore. API is pioneered by the Institute for Democracy and Economic Affairs (IDEAS) based in Kuala Lumpur and API used to be the Economic Freedom Network (EFN) South East Asia.

Travel from Manila to Singapore and the rest of ASEAN member countries is much easier now because of previous air travel liberalization policies, increased airline competition, and visa-free travel for 30 days or less.

The Philippines is among the laggards in East Asia in optimizing its tourism potentials. More than 7,500 islands and islets, lots of white sand beaches and islands, big mountains and waterfalls, nice golf courses and entertainment, and we got only six million foreign tourists in 2016 — about one-half of those going to Vietnam, Indonesia and Singapore , one-fourth those in Malaysia. In tourism receipts, Philippines got only one-fifth of those going to Thailand (see Table 1).

The bulk of the Philippines’ carrier departures (take offs) were domestic flights and passengers. We need to attract more foreign airlines and carriers that will bring in more foreign visitors and investors.

The same can be said for other ASEAN economies, especially the poorer ones like Cambodia, Myanmar and Laos. 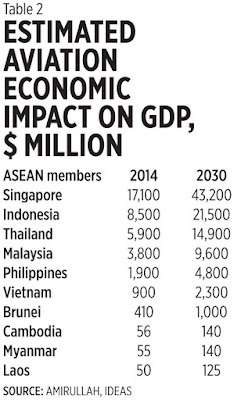 In a paper published by IDEAS titled Economic Benefits of ASEAN Single Aviation Market, Adli Amirullah made this projection on the importance of more aviation liberalization (see Table 2).

Mr. Amirullah summarized the important policy reforms needed: (1) Liberalization through the ASEAN Single Aviation Market (ASAM) has already benefited millions of people in the region via more competition; (2) More benefits will be achieved if ASAM is fully implemented; (3) The biggest markets will be the biggest winners, particularly Indonesia and Philippines; (4) Specific steps are needed to advance ASAM, like prioritizing full implementation of ASEAN community carriers.

Meanwhile, wind-solar lobbyist and businessman Eddie O’Connor resumed his attacks against me with his recent letter in BusinessWorld (“There is a well-known syndrome for coal lovers. It is called carbophilia,” published on Dec. 9). His parochial mind cannot comprehend that it is not me or anyone else in this country that advocates and implements more coal use for electricity generation in the region; it is the people and governments themselves: in China, coal accounts for 67% of 6,495 terawatt hours (TWH) production in 2017; India 76% of 1,497 TWH; Indonesia 58% of 260 TWH, Australia 61% of 259 TWH; S. Korea 46% of 572 TWH, Taiwan 47% of 270 TWH. My longer response to his letter will be posted in my blog as I do not want to further use this newspaper’s space to respond to marginal minds promoting expensive, subsidy-dependent and marginally-producing energy sources. [Mr. O’Connor also contributed a piece in today’s Opinion page. — Ed.]

More competition, more choices for the people. Governments should prioritize this as an overriding concern when they craft new policies and regulations — in land, sea and air transportation, in energy and other sectors.
---------------