UP became the UAAP champion in men’s basketball only twice, in 1940 when there were only four member-universities, and in 1986 with plentier teams. So after 32 years, 2018 could have been the rare chance for UP to become champion again.

From always cellar-dweller with often winless records, UP reached the top four, the semi-finals this year, and it was big celebration among UP students and alumni. High inflation of ticket prices started in their two knock-out games with Adamson.

When UP defeated Adamson and reached the finals after three decades and challenged defending champion Ateneo Blue Eagles, hyper-inflation of ticket prices occurred. A P200 ticket in Upper Box for instance was selling for P1,000, P1,500, even P3,000.

I watched Game 2 of the championship when Ateneo officially bagged the 2018 championship trophy. The energy of both sides was electrifying. Perhaps anyone paying the hyper-inflated ticket with a seat from scalpers would not bother just to feel such electrifying experience.

There is no escape from the law of supply and demand. When demand is very high while supply of seats is limited — Araneta Coliseum 16,500 seats, Mall of Asia (MOA) Arena 20,000 seats — then the tickets at original prices would quickly vanish. To reappear at a much higher, hyper-inflated prices.

Both venues should have struck a deal with UAAP and member-universities to raise ticket prices to 3x or 5x their original prices and portions of the extra revenues will go to UAAP members. This way, people with lower budget would opt themselves out and watch the games free in their respective campuses, malls, bars or in their houses. This is a proven measure to get rid of scalpers partially or fully.

The lesson — rely on market forces, let prices go up or down temporarily depending on supply-demand dynamics.

When government comes in, this market dynamism is restricted if not killed. Like when government imposed high oil taxes under the TRAIN law and this was implemented this year.

The Philippines’ inflation rate this year has mellowed from peak 6.7% in September and October to only 6% last November. This is the good news.

The bad news is that such decline is not enough to counter the inflation momentum this year. The Philippines has the biggest jump in inflation 2018 year to date (ytd, January to October or November) versus inflation 2017 (See Table 1). 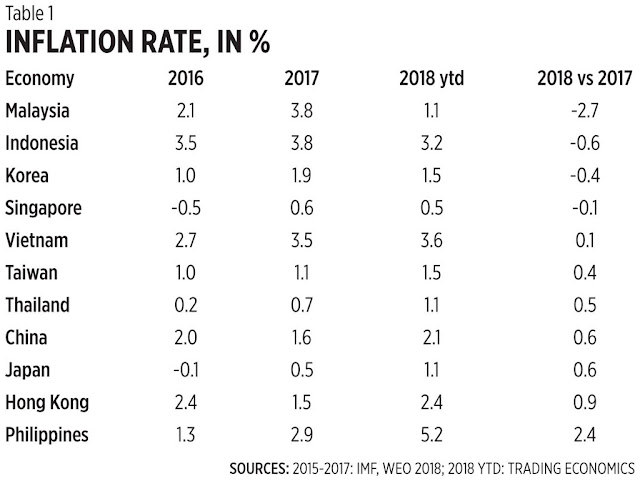 A few weeks ago, the Duterte administration announced that it will suspend part 2 of oil tax hikes this coming January. That was good, and it was an implicit admission that oil tax hikes under TRAIN law are mainly responsible for our high inflation.

This week, the government made a U-turn and announced that part 2 of oil tax hikes will proceed as scheduled next month.

Cheap oil and energy is good. It means lower cost of farming (tractors, irrigation pumps, threshers, harvesters, trucks) and lower cost of fishing, which can help bring down food prices. Lower cost of manufacturing and in all other sectors of the economy.

But government and its allies think this is wrong, so government imposed high taxes to make oil and energy become expensive. Lousy.

French President Emmanuel Macron suffered heavy political beating after his government imposed high diesel taxes this year, part two to be done next month. Public reaction was deep anger at such a policy of expensive oil, expensive energy, even if Macron said it was meant to help “fight (man-made) climate change.”

After more than two weeks of violent demonstrations and rioting, Macron reversed policy and will not implement additional oil tax hikes.

While players, officials and fans of UAAP basketball and other sports can now rest, Philippine consumers have no rest from government-imposed expensive energy policy.
-------------