The Bureau of the Treasury data of the Philippines’ outstanding debt showed P7.167-trillion total as of October 2018, composed of P4.62-trillion domestic debt and P2.546-trillion external debt.

These are huge numbers. With or without economic crisis and financial turmoil, the figures keep rising, never flatlining or declining.

But this is not unique for the Philippines. Other countries have bigger debt even if they are already industrialized, and even if they have a smaller population. See the numbers for external debt alone. 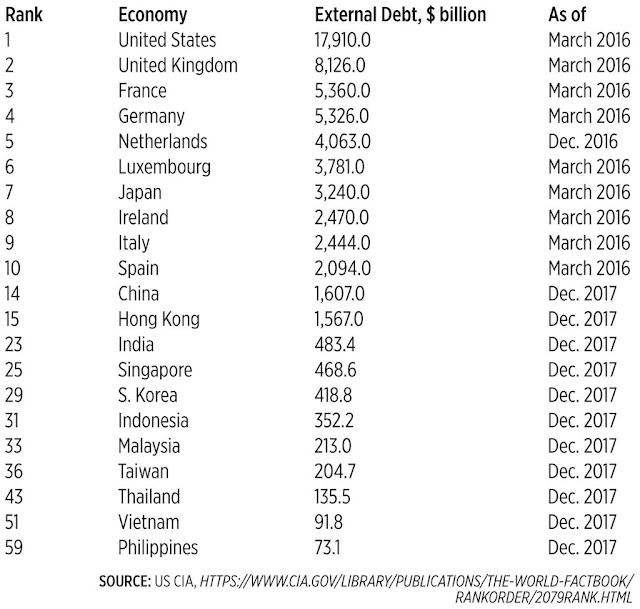 There is one term or description for the ever-rising debt of governments around the world: fiscal irresponsibility. Spend-spend-spend, tax-tax-tax, borrow-borrow-borrow, as if the money comes from the sky falling on governments forever.

At the household and micro level, when a person always spends beyond his/her means, he is called “mayabang, gastador, maluho, iresponsable” etc. When governments do this, they are not called as such, they even get self-congratulatory labels of practicing “fiscal prudence.”

In the Philippines and other countries, certain sectors realize the value of savings, of living within their means or below their means to have forced savings.

To have sufficient savings, people use the formula: Income — Spending = Savings.

There is a problem here. If Savings are not targeted, spending can eat up the whole income and savings will be small, if not negative.

The appropriate attitude then should be: Income — Savings = Spending.

There should be forced savings target and spending should be variable and adjusted downwards to reach the targeted level of savings.

This is among the important discipline and messages that the Palawan Savers Club (PSC) has adopted for its members and friends under the guidance of their founder, Peter “Pidro” Sing.

Pidro is a self-made successful businessman. He did not inherit money or business from his parents or close relatives. He is a friend from the University of the Philippines Diliman. In the 1980s, we both stayed in Narra dormitory and we were both student-activists when Marcos was still the President of the Philippines. His CV is a roller coaster of hirings, resignations, and start-ups (he knows what it’s like to start a business, go bankrupt, start another, close it, start another — sometimes simultaneously. He did not get a formal business education; he was enrolled in the “school of life.”

When Pidro formed the PSC in July 2014, there were only 20+ members. To date, it has 800+ member-savers. They are mall and office employees, vendors and sari-sari store owners, tricycle and van drivers, tour guides, OFWs, students, professionals (like doctors, veterinarians, lawyers), and government employees.

Pidro gives lectures on “Savings for Success (S4S): An introduction to financial education” at least once a week in Puerto Princesa, Palawan. If out of town, he speaks two to four times a week to optimize his time. Sometimes he has two speaking engagements in a day.

He spends his own money and time for his personal advocacy. After going through cycles of wealth and bankruptcy, he realized that the key to wealth is not so much how big the monthly or yearly income is, but how big and consistent is the forced personal and household savings.

Government’s fiscal irresponsibility should be tempered by citizens who know the value of living within their means, the value of forced savings, and limited spending. And government should learn to live below its means when there is no economic and financial turmoil in order to accumulate fiscal surplus and pay off huge debts.

Pidro and PSC — and other groups with similar advocacies — are setting the needed social and political change that we hope to see in our lifetime.