B2 bombers in Hawaii to warn China

Good decision, Trump. Get out of Syria -- Iran, Russia and Turkey have more interests in demolishing the ISIS there. Get out of Afghanistan -- too long US troops have been there with no end in sight. Focus on the SCS/WPS, a huge, armed to the teeth communist dictatorship bullies its neighbors and steal territories big time, can harass thousands of US commercial ships passing by the area, and wants to invade Taiwan for a forced unification. Face and counter-harass those communist bullies.

Trump's tweet early today. I like his threat to "devastate Turkey economically if they hit Kurds." The Turks know that Trump does what he says. 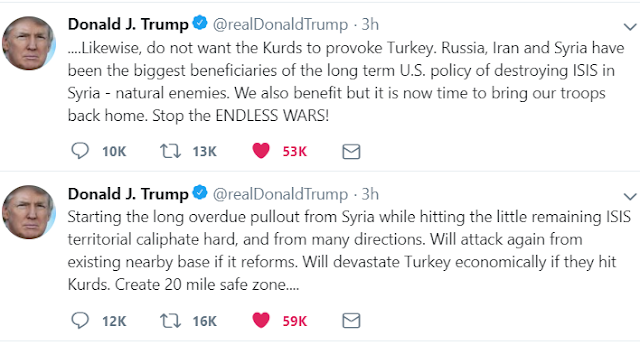 See his trade challenge vs China over tariffs and IPR theft. CN is limping now on trade -- first time in 3 decades or more. Only Trump has the courage and balls to challenge that big protectionist socialist economy in trade and IPR.

Will there be a "US-China shooting war"?

No. I don't believe that. The CN communist leaders are not 100% irrational. They know that they are newbies when it comes to large-scale world war. The US has been a military superpower after WW2 in the mid-40s even before Mao Tse Tung came to power in 1949 and CN that time was so poor and technologically backward. We do not see and know yet the real armaments that the US will use in real big wars.

Meanwhile the Dems, the Clinton News Network (CNN), the NYT, WaPo, etc, they love endless wars so they attack Trump's decision to get out of Syria and Afghanistan. They love sending more young US soldiers in the MidEast, elsewhere, they want more taxes to support those expensive wars with no clear economic and social gain for America. Lousy.

(See also, On the US troop withrawal from Syria and Afghanistan, December 22, 2018)
Posted by Bienvenido Oplas Jr at 10:03 PM