Philippine inflation, already galloping beyond the government’s control at 6.4% in August, is set to accelerate even faster after the damage wrought to crucial agricultural crops by Typhoon Mangkhut.

The super storm, known locally as Ompong, killed at least 66 people and caused heavy damage to crops and infrastructure in the country’s northernmost crop-growing heartland, namely the Ilocos, Cagayan and Cordilleras areas.

Cagayan province has already been put under a state of calamity, with its Governor Manuel Mamba say crops in the area have been entirely destroyed.

The Department of Agriculture has initially estimated agricultural losses at around 12 billion pesos (US$222 million). The nation lost an estimated 250,730 tons of paddy rice due to Mangkhut’s heavy rains, strong winds and massive flooding, exceeding the department’s worst-case forecast by some 60%.

That will put even more pressure on the government to boost rice imports and add to price pressures that recently drove inflation to a decade high. Even before the storm government planners aimed to import an additional 383,500 tons of rice, on top of approved purchases earlier this year of more than one million tons.

The Philippines is already one of the world’s biggest rice importers and its rising demand is already raising the price of the grain in Vietnam, its main foreign supplier. 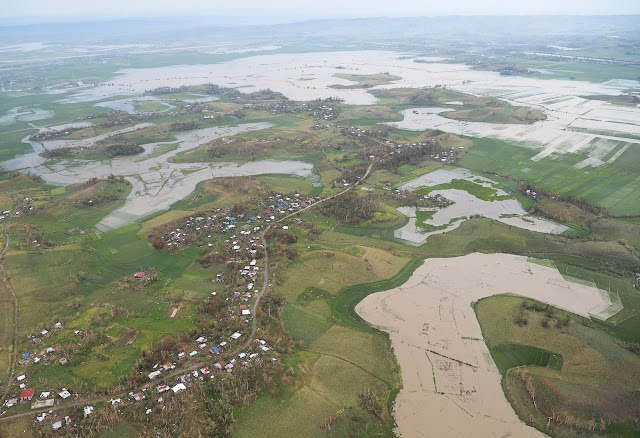 The 12 billion peso loss thus equates to about 3.9% of the quarter’s projected 310 billion in agriculture and forestry earnings. Northern provinces had already suffered big agriculture and fishery losses from two monsoon rains that lasted between one to two weeks in July and August.

If the degree of crop failure and consequent price hikes for these products in August is repeated or exceeded in September, then inflation could hit over 7.0% for the month. The Philippines already had the highest inflation in the region in August at 6.4%, far outpacing the next fastest rates in Vietnam at 4% and Indonesia at 3.2%.

If inflation hits 7% in September, then year to date (January to September 2018) inflation will rise to 5.0%, much higher than the government’s original target band of between 2-4% for full year inflation. That would be dangerous for consumers and politically damaging to President Rodrigo Duterte’s administration.

Even before Mangkhut there were several inflationary risks on the horizon, including fare hike petitions from buses, taxis, vans and other public transport operators that have not yet hit headline inflation. A soon-to-be-implemented airplane fuel surcharge will also add to inflationary pressures.

So, too, will the continued depreciation of the Philippine peso, which averaged around 51 to the US dollar in 2017 and is currently trading at over 54 to the greenback. The cost of imported oil, food and other consumer items will thus further rise year on year.

Next phase oil, liquefied petroleum gas and coal tax hikes set for January 2019 will also add to the inflationary mix. 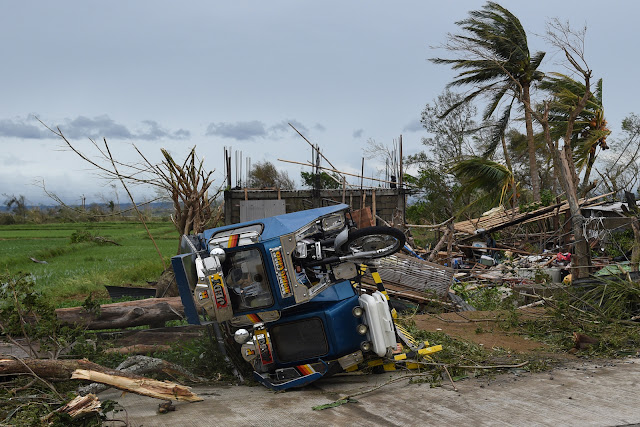 An overturned tricycle is seen next to a destroyed house after Super Typhoon Mangkhut hit the town of Alcala, Cagayan province on September 15, 2018. Photo: AFP/Ted Aljibe

As Mangkhut caused damages threaten to push food prices higher, Duterte is left with limited policy options. His administrations limited trade liberalization measures on rice and fish imports have so far had little if any deflationary impact.

Interest rate hikes by the central bank, aimed at discouraging consumer spending, fail to take into account that the poor have so far taken the brunt of higher prices on staples like rice and will inevitably slow growth and job creation.

A new program to give away free rice and vegetable seeds to farmers is a stop-gap measure, at best, that would anyway take months to have a deflationary impact if effectively scaled.

And there is no guarantee those new crops won’t be washed away the next time a major storm hits the Philippines, one of the most typhoon-prone countries in the world with an average of 20 major, damage-causing storms recorded each year.
-------------