“A contestable market is one into which entry is absolutely free, and exit is absolutely costless… Absolute freedom of exit is one way to guarantee freedom of entry, any firm can leave without impediment, and in the process of departure can recoup any costs incurred in the entry process. Their firms need not be small or numerous.”

This is the beauty and superiority of the contestable market theory over the perfectly competitive market theory. Even under a temporary monopoly, oligopoly or other imperfectly competitive markets, the incumbent player/s will not abuse their dominant position through very high prices and/or lousy products and services because there is always a possibility of new entrants coming in to challenge them. The threat of “hit and run entry” from new rivals will keep the industry or sector operating at a competitive price and output.

Applied to the ride-hailing subsector in Philippine land transportation, the behavior and ruling of the Philippine Competition Commission (PCC) penalizing both Uber and Grab a total of P16 million for their merger this April is wrong from the perspective of promoting a contestable market. PCC sent a bad signal to future players and competitors, local and foreign, telling them that there is a big cost for exit — on top of a big cost of entry — due to the bureaucratic red tape of the Land Transportation Franchising and Regulatory Board (LTFRB).

This two-in-one barrier to entry and exit — barrier to more competition and consumer choice — is created by government agencies that are ironically created to protect consumers, to give them more choices.

As of today, LTFRB retains the cap of 65,000 cars for ride-hailing players in Metro Manila. Prior to the Grab-Uber merger in April 2018, their combined 43,000 units were getting some 600,000 bookings a day on average. After the merger, only 34,000 cars were available because LTFRB did not accredit 8,000 cars from Uber. As expected when supply shrinks but demand remains the same, the waiting period increased, fares increased, and public dissatisfaction increased. But the public and government agencies blame the merger, not the government agency that caused the shrinking of supply.

By late 2018, things seem to have deteriorated because many accredited but retired Grab cars and drivers cannot easily be replaced by new cars and drivers. LTFRB makes it difficult and very bureaucratic to do so. Meanwhile, demand has further increased from 0.6 million bookings a day in April to nearly 2 million a day in December as traffic congestion continues to worsen, with a peak demand of 2.5 million on certain days.

Fares naturally have increased as a rationing mechanism. Passengers who want to avail of ride-hailing service but can’t afford to do so will opt out and take instead the regular taxi or aircon van, or bus/jeep/tricycle multiple rides. Other passengers keep waiting or endure higher fares then lambast the dominant player later.

The Philippines has a good outlook in the ride-hailing business based on Statista projections, the compounded annual growth rate (CAGR) in 2018-2023 is estimated at 30%. This year, projected gross revenues for all competing players is close to $500 million, 15th largest in the world. In 2019, the Philippines is projected to overtake Vietnam, now ranked 14th in the world in ride-hailing revenues (see table). 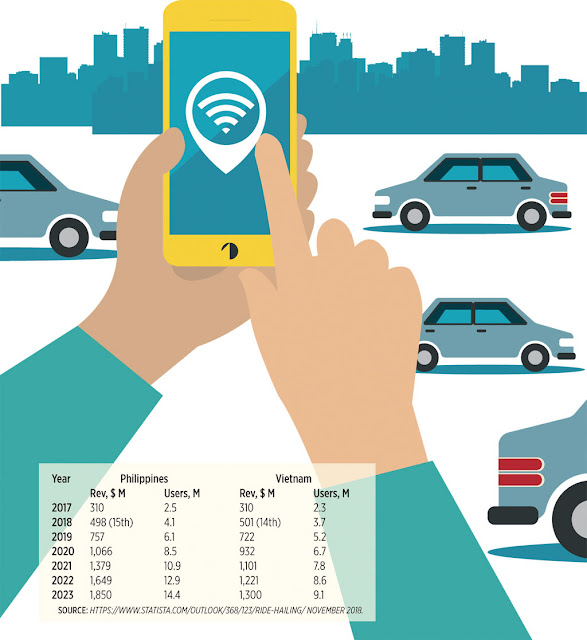 No one puts a gun to people’s heads and demands that they must endure the high fares charged by transport network vehicle services (TNVS)/transport network companies (TNCs). People have the choice to opt out. But when government puts a shadow gun to the heads of TNVS operators and car drivers, saying that they must endure heavy traffic and graveyard shifts without raising their fares to a level dictated by LTFRB, things become different.

Government should also give existing and potential players the leeway to enter and exit, and to innovate new services with corresponding fares.

Only when accredited cars and drivers do things outside of their stipulated service, like robbing or sexually molesting their passengers, should the heavy hand of government regulations and coercion apply.
---------------