This list and analysis is more focused on East Asia but a brief discussion of the US and global economy is also made. Here we go.

1. Despite rising world oil prices, US interest rates, and other external factors, the inflation rate in the region is declining or flatlining compared to the 2017 levels — except in the Philippines.

Well, some economies also have had higher inflation in 2018 vs 2017 but with rational explanations. China and Hong Kong’s inflation only returned to their 2016 levels, Thailand and Japan’s rose to 1% as they have had very low inflation over the past two years.

3. Despite adverse external business environments, many Asian countries experienced up-up, or down-up or up-down growth rates over the past two years — except the Philippines, which has had down-down growth rates in 2017 and 2018 compared to 2016. 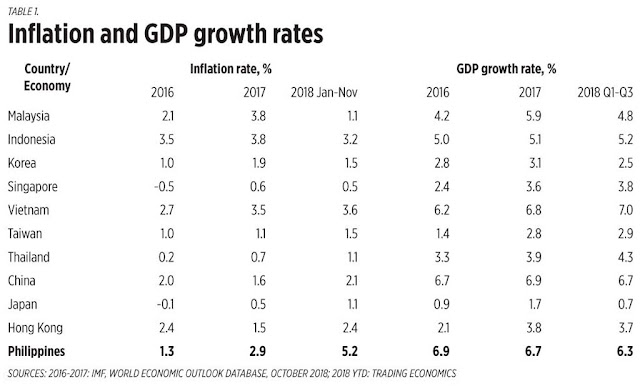 4. On the so-called “trade war,” the US’ trade and current account (CA) deficit barely improved but the current account surplus of China and Hong Kong have significantly declined this year, implying that the US’ CA deficit is more structural while China’s CA surplus is more political.

5. India, Indonesia, and the Philippines are suffering from worsening CA deficit situations, implying that their merchandise and non-merchandise exports are becoming less competitive. 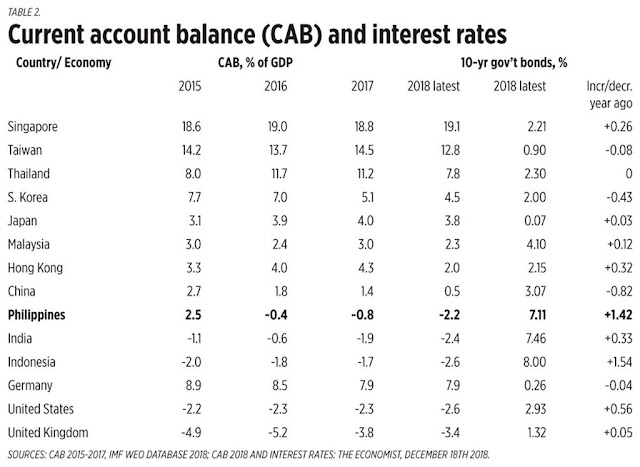 6. US interest rate hikes are significant compared to fellow industrialized countries like Japan, Germany, and the UK, among others. This significantly contributed to turmoil in the US and global stocks and commodities markets.

7. Among emerging Asian economies, the Philippines and India are suffering from renewed high public debt addiction.

8. There has been good news of a big decline in world oil prices in the last two months of 2018 — WTI (West Texas Intermediate, also known as Texas light sweet) oil is now below $50 a barrel, much lower than the 2017 levels. The bad news is that Part 2 of the TRAIN law’s oil and coal tax hikes will be slammed starting January 2019.

9. The mantra of high oil and carbon taxes to “save the planet” suffered a big defeat in France, the home of “Paris Agreement.” French President Macron was forced to cancel and remove the high oil taxes to “fight (man-made) climate change.”

10. The Duterte government’s “drug war” has, ironically, coincided with large-scale, multi-billion drugs shipments into the country. This is related to the rise in the perception of corruption and decline in business dynamism and growth slowdown.

So, what’s in store for the region and the Philippines in 2019?

The above numbers and related data are showing a trend — of China’s growth bubble being slowly pricked, of major ASEAN economies showing economic resilience, of the Philippines becoming the odd-man-out, for the worse.

It looks like this trend will continue in 2019. To help reverse the Philippines’ growth decline, the government should step back from huge tax hikes under the TRAIN law, reprioritize integrated PPP (public–private partnership) and abandon hybrid PPP for infrastructure development. This will help cure the fiscal disease of spend-spend-spend, tax-tax-tax, borrow-borrow-borrow exhibited by many governments around the world.
----------------