I used to read a lot of stories about "fish kill" in Laguna Lake -- the biggest lake in the Philippines -- a few years ago. Today I googled the subject, no recent news, good. The latest story is about Taal Lake in Cavite,

Perhaps this means that the fish farmers in Laguna Lake have improved their system so that large-scale fish kills are now avoided, or water quality in the lake has somehow improved, or these plus other factors. Meanwhile, I posted below 7 1/2 years ago.
-------------------- 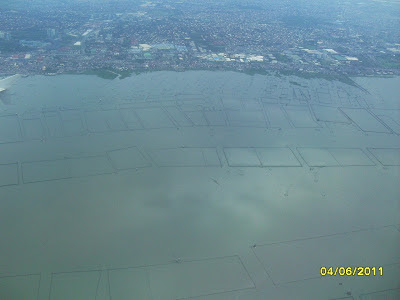 These are the fishpens in Laguna Lake that I took from a plane this afternoon on my way to Bacolod City to visit my sick mother. Click on the pictures to see their larger images.

Too many fishpens in the lake, just a few dozen kilometers from Metro Manila proper. And much, much more houses and structures to accommodate Metro Manila's 12 million people, which easily rises to 13-14 million daytime population on regular days as people living in the neighboring provinces of Bulacan, Pampanga, Rizal, Laguna and Cavite would troop to the big metropolis to work or study or do business. 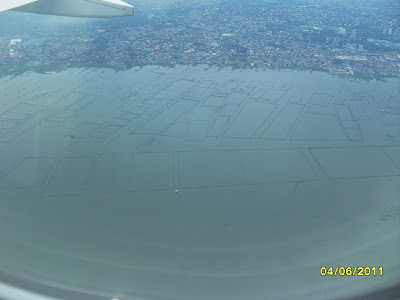 A few days ago, there was a huge report and fish scare as a result of the big fishkill affecting bangus (milkfish) in Taal Lake, not very far from Laguna Lake. A friend from one of my discussion yahoogroups working at the Bureau of Fisheries and Aquatic Resources (BFAR) gave this brief explanation:

... natural incidence where dissolved oxygen becomes low such as night time where there is no photosynthesis. To avoid the situation such as that, we recommend the limitation of stocking density to the extent of the "carrying capacity" of the water bodies. These are all defined in the guidebook. Thus in a 10 meter x 10 meter by 5 meter floating cage in marine areas where there is sufficient current or tidal movement,we recommend the stocking density of 10,000 pieces of 5 - 6 inch bangus fingerlings which if harvested in 3 - 4 months can yield on the average 4.7 tons of bangus.

Unfortunately, others extrapolate that by deepening the depth of the cage to 15. They claim, they can triple their income not realizing that the bottom of the cage might not have enough dissolved oxygen to support life. The deeper the water, the lesser the dissolved oxygen because sunlight does no reach those areas as much as the upper portion and that oxygen gets to be dissolved into the water from wave action. Taal lake does not have any tidal movement as it is a landlocked lake. 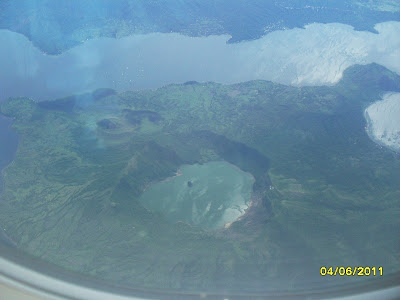 Aside from the above explanation, Taal Volcano, in this picture, is a very active one. It is rumbling every 5 years on average, I think.

My friend who used to have a tilapia farm in Taal Lake, Batangas side, gave up his business after several cases of fishkill in the past. There were several instances where he would be harvesting tens of thousands of tilapia tomorrow or the next day, and tonight, almost all of the fish are dead. He and other fishpen farmers in the area suspect that the volcanic gases that find their way into the lake, affect the water's chemical mixture, poisoning the fish. 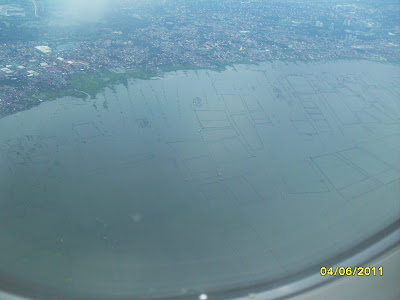 Philippine population is rising fast, around 1.8 million people per year, net of death and migration. It's like we are creating an equivalent of one Singapore every 3 years. The big demand for food like fish pushes for big supply of the commodity. A normal cycle in capitalism of supply meeting demand when the price and incentives are right.

While certain government regulations may help minimize fishkill and related problems in aquaculture, it's the threat of the actual fishkill and the huge financial losses associated with the event that is the biggest regulator in the minds of the entrepreneurs in the aquaculture industry. And that creates new opportunities for scientific research, like the development of new varieties of tilapia and bangus that are more resistant to certain biochemical fluctuations in the lake or other bodies of water.
Posted by Bienvenido Oplas Jr at 8:51 AM