AOC + Krugman plan for US socialism

AOC's big plan is her "Green New Deal" that aims a 100% RE economy, zero fossil fuels, by 2030. It will be a very expensive plan that will require very big and high taxes. Her plan is up to 70% personal income tax (current US top marginal tax rate is 37%) for people earning $10 M a year or higher.

The Economics of Soaking the Rich
What does Alexandria Ocasio-Cortez know about tax policy? A lot.
By Paul Krugman, Jan. 5, 2019
https://www.nytimes.com/2019/01/05/opinion/alexandria-ocasio-cortez-tax-policy-dance.html

“...when taxing the rich, all we should care about is how much revenue we raise. The optimal tax rate on people with very high incomes is the rate that raises the maximum possible revenue... As I said, Diamond and Saez put the optimal rate at 73 percent, Romer at over 80 percent — which is consistent with what AOC said.” 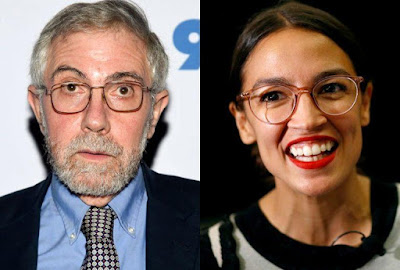 
"Does the US actually want to become a sclerotic centrally planned economy with minimal if any growth, forever teetering on the brink of collapse like that of Europe? In fact, the proposals by Ms. Ocasio-Cortez would make the situation in the US far worse than in most of Europe. Not to mention that her “Green Deal” is downright nutty, and that is putting it as mildly and politely as possible."

I'm a non-fan of Krugman and other lefty academics and researchers. These are people who love central planning because they are the technocrats of the politician central planners, if not the planners themselves appointed by socialist dictators in power.

I'm still wondering how come that many Americans who enjoy their facebook and youtube capitalism, google and twitter capitalism, Samsung and Apple capitalism, etc. would be enamored with the idea of socialism, weird.

Anyway, I do not believe that socialism will succeed in the US. If ever it will, that will be an opportunity for the US to disintegrate into many new countries, allow certain states to become socialist, fully or partly, while leaving the rest to embrace the profit and price system under capitalism.
Posted by Bienvenido Oplas Jr at 12:53 AM