BWorld 280, Provinces and New Year wishes for them

Last month, I traveled to several provinces. Below are my observations and my wishes for them.

1. Palawan. I went there with former dormmates from Narra dorm in the University of the Philippines Diliman in the 1980s upon the invitation of fellow Narrehan Peter “Pidro” Sing, founder of Palaweno Savers Club. Puerto Princesa has a new and bigger airport but no passengers tube to the planes. Big malls and hotels are sprouting. Roads are improving and widening but some are still bumpy. The main attraction is still the Puerto-Princesa Subterranean River National Park, which attracts an average of 1,000 people a day. When school is out, the park attracts up to 1,600 visitors a day. Local oil prices are about P7/liter more expensive than Manila prices, bad for the locals.

2. Oriental Mindoro. I drove again from Makati to Iloilo during the holidays via roll-on, roll-off (RoRo) vessels. Calapan Port has somehow expanded but the road from the port to the city proper — and bypass road — remains narrow with so many vehicles passing. The road from Calapan to Roxas is good, as is the road to Bulalacao. Road widening continues but one cannot sustain fast driving as there are too many tricycles and motorcycles. The Port of Roxas is wide and good but it becomes very congested and “small” during the holidays with so many vehicles and people going to Caticlan Port and Panay island.

3. Aklan. Caticlan Port is good and wide but like the Calapan and Roxas Ports, it becomes congested during the season. It is the gateway to Boracay, that’s why. The provincial road network is generally good and smooth. I did not notice even a single road cut.

4. Capiz. The first time I took the RoRo bus from Cubao to Iloilo was about two decades ago. The roads in Capiz were notable because they were ugly and bumpy. Now the roads have improved and widened but several parts remain ugly and bumpy. I wonder what is wrong with the provincial Department of Public Works and Highways (DPWH) and provincial government — this seems to be a forever problem.

5. Iloilo. Roads improve upon reaching this province except for a few short road repairs. Iloilo City is booming especially the old airport area that has been developed into a modern central business district (CBD) by Megaworld and other big Manila-based developers. Buildings and hotels there are new and modern. My wife’s parents live in the city — that’s why my family visits Iloilo yearly.

6. Guimaras. Famous for many white beach resorts and sweet mangoes, Guimaras is enjoying a very visible economic and business expansion. A boat leaves from Jordan port every five minutes carrying, I think, 40-50 passengers. The fare is only P15 per head for a 15-minute trip. The provincial road network is generally good. Many portions are now four lanes, preparing for the onslaught of more cars and motorcycles.

7. Negros Occidental. My province: I was born in Cadiz City, attended public elementary and high school there. The new, bigger provincial airport is now in Silay City while the old airport in Bacolod City remains undeveloped. There is a new, bigger seaport terminal for fast crafts coming from Iloilo and Manila. Many big malls, BPO centers are now in Bacolod. The provincial road network is regularly maintained and road widening continues. 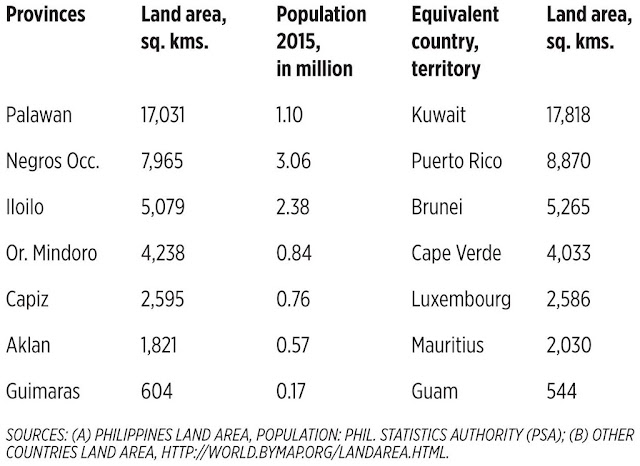 COMMON ISSUES IN SEVEN (AND MANY OTHER) PROVINCES AND MY NEW YEAR WISHES (NYW) FOR THEM:
1. Insufficient power supply while electricity demand keeps rising, resulting in occasional brownouts.

My NYW: That new power plants from cheaper and stable sources (coal, gas, big hydro) be constructed soon in these islands.

2. Many tricycles and motorcycles in highways leading to slower travel.

My NYW: That new tollways be constructed, especially from Calapan to Roxas where vehicle traffic is rapidly rising due to the large numbers of people driving from Manila to Panay (sometimes even up to Negros Occidental and Oriental).

My NYW: That more road reclamation and port expansion be done, and newer and bigger boats be dispatched.

4. Although many of these provinces are big, they are not developing fast enough as our decentralization scheme is not effectively working. Meanwhile, the proposed shift to federalism will, in my opinion, only expand bureaucracies.

My NYW: That someday, the big islands and provinces can become new, separate countries.

(Also, an aside regarding stories of “worsening plastic pollution” in seas — whether worldwide or nationwide — I saw the seaports of Batangas, Calapan, Roxas, Bulalacao, Caticlan, Iloilo, Guimaras, and Bacolod: I saw some of the beaches in Palawan, Guimaras, Iloilo, and Negros Occidental. To me, these stories are alarmist and fake news as I did not see a big volume of plastics in the sea even in big cities like Iloilo and Bacolod.)
---------------