US shutdown could mean cutting the bloated bureaucracy

Aside from highlighting the need for the wall or steel barrier at the southern border, I have a feeling or hypothesis before that US President Trump also wants to cut the bloated bureaucracy via "shutdown." This article has somehow confirmed my hypothesis.

" As one of the senior officials working without a paycheck, a few words of advice for the president’s next move at shuttered government agencies: lock the doors, sell the furniture, and cut them down... It is an opportunity to strip wasteful government agencies for good.

Due to the lack of funding, many federal agencies are now operating more effectively from the top down on a fraction of their workforce, with only select essential personnel serving national security tasks. One might think this is how government should function, but bureaucracies operate from the bottom up — a collective of self-generated ideas. Ideas become initiatives, formalize into offices, they seek funds from Congress and become bureaus or sub-agencies, and maybe one day grow to be their own independent agency, like ours. The nature of a big administrative bureaucracy is to grow to serve itself. I watch it and fight it daily….

The president’s instincts are right. Most Americans will not miss non-essential government functions. A referendum to end government plunder must happen. Wasteful government agencies are fighting for relevance but they will lose. Now is the time to deliver historic change by cutting them down forever."

The on-going shutdown could also mean less climate alarmism among US government science and climate agencies? 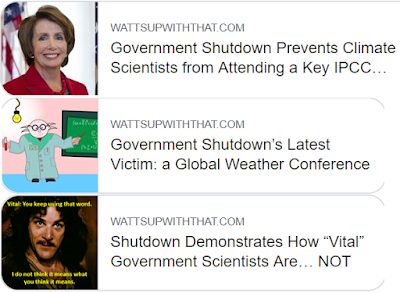