“Wealth is well known to be a great comforter.” — Plato

Until about the 1960s and 70s, Philippine business was dominated by the land-based and a few real estate wealthy families like the Zobel-Ayalas. Things changed in the 1980s in both politics and business and when the Marcos dictatorship collapsed along with its huge cronies.

Unlike the Ayalas who somehow started their wealth since the Spanish period, Henry Sy started his wealth only in the 1950s after the Pacific War. His first store (SM Carriedo) was built in 1958 and his first supermall (SM North Edsa) was built in 1985. From there, many huge malls along with “SM City” sprouted around Metro Manila and in big cities in the provinces. 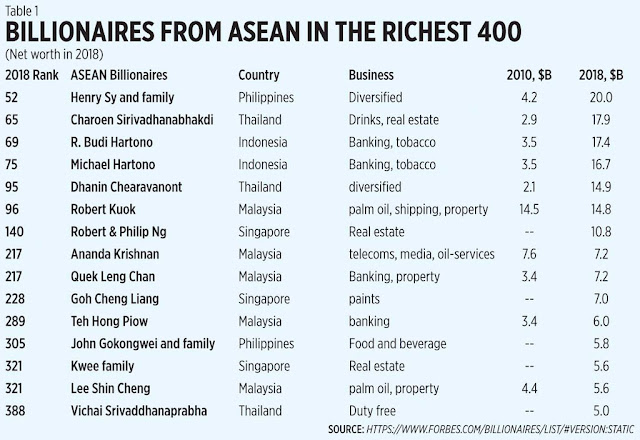 Forbes has another list, the richest people per country and for the Philippines, the numbers are a bit different from the above table. Nonetheless, 18 Filipino families were billionaires in 2018, the top 10 listed below (See Table 2).

Given the speed and size of the Sy family’s wealth, accumulating $20 billion in net worth in just seven decades, I would consider Mr. Sy as a hero of Philippine capitalism. He has expanded his wealth and in the process, tremendously expanded job creation, entrepreneurship of small and medium business partners, suppliers and mall locators across the country.

And all big capitalists do not really aspire to be the “richest man in the grave” so he gave away a big portion of his wealth to others in the education sector. He did not come from UP but he donated a building to UP’s BGC campus. All these can never be replicated even by the most famous political families in the country.

My hypothesis that he is a hero of Philippine capitalism is somehow confirmed by two of my friends and fellow alumni from UP School of Economics (UPSE).

From my batchmate, Leo Riingen: “Henry Sy is a great Filipino. He changed the retail landscape and shopping experience of Filipinos. I owe my entrepreneurial spirit to him as I started most of my businesses in SM.”

And from the current president of the UPSE Alumni Association, Jeffrey Ng: “Through his humility, hard work and grand vision, Mr. Sy has provided Filipinos with all the modern conveniences of shopping in the malls. He was also a great philanthropist who donated whole buildings to our top universities, numerous schoolhouses all over the country and gave scholarships to many Filipinos.”

Now there will be groups who will demonize Mr. Sy and his SM business for “labor exploitation” like “endo” practices as a means towards capitalist accumulation. This view would come from leftist and socialist groups.

Creating tens of thousands of jobs, direct or indirect, is not labor exploitation but labor optimization. Definitely there were cases of business abuses in treating workers and entrepreneur-suppliers. It happens in other businesses, big and small, and it happens in government. But such negatives would easily be surpassed by positives in the form of ever-expanding job creation and business expansion by partner entrepreneurs.

The only thing that is probably keeping the Philippines afloat these days is the resilience of the private sector and Philippine capitalism. No thanks to and especially under the current regime, it seems.