This is my letter to MMDA last January when I was called during further investigation of my case, I forgot to post this earlier. See background,

To summarize the case:

I indeed parked briefly in a “No Illegal Parking” area in front of a talipapa in JP Rizal, Makati that afternoon. About 5-6 minutes parking to buy a kilo of pork and rice, my 2 daughters aged 7 and 11 yo inside, engine and car air-con on. When I came back, MMDA already hooked the metal, I pleaded for a violation ticket, no luck. My car was towed and impounded at Tumana, Marikina, December 1.

The next day, December 20, I was able to meet Mike Salalima, he opined that my car should have not been towed, a simple violation ticket should have been issued. Mike arranged for the release of my car with no towing fee. I thanked Mike for that, I briefly included our conversation in my BusinessWorld column published on December 21.

Since I did not pay the supposed fine, I did not file a formal complaint anymore. It was enough that I wrote my experience and it was read by so many people. My article was #2 then #1 most read article in BusinessWorld from Dec. 22-26, five days. I received a number of letters in my email, my article was shared by many people, it triggered many debates and exchanges in social media especially in facebook.

Last week, January 23, I attended a meeting called by MMDA Legal Department, Officer Dayaon was there. Among the issues raised during that meeting.

1. Mr. Dayaon said he does not know that crew of any towing company can not and should not hold the wheel of a towed vehicle if the owner or driver is inside the car. Since he has been with MMDA for several years now, either he is ignorant of the towing regulations that he implements and enforces, or he is outrightly lying.

2. MMDA Hearing officer Cristopher (?) rightly said towing officers that day should have spared my car from towing (and plain ticket violation should have been issued instead) for humanitarian reason – there are two young girls inside experiencing the vibrations and loud blag-blag sounds when the truck stops and go. And they see a stranger holding the wheel of the car.

3. Mr. Dayaon said he did not notice that there were young girls inside. This is impossible because my car tint is medium, just to minimize bright, direct sunlight, so people outside can easily see what’s inside, even a ball pen or pencil. 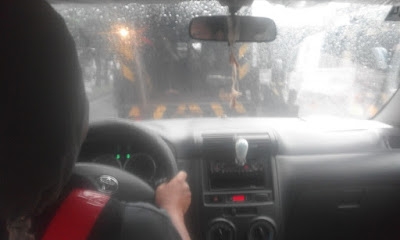 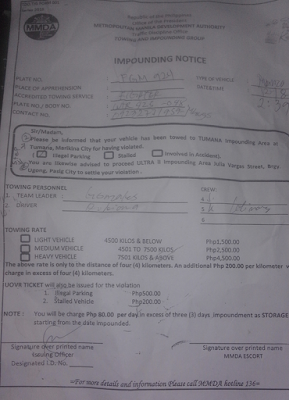 6. The act of towing-impounding cars to far away place is actually worsening, not reducing, the traffic congestion in Metro Manila. I avoid driving outside Makati 6 days a week, Monday-Saturday but that afternoon December 19, we were on the road for 2 ½ hours, Makati-Edsa-White Plains-C5-Marcos Highway-Marikina, contributing to traffic congestion on those areas. Coming back to Makati the next day, December 20 afternoon, it took me 3 hours from Marikina to Makati via C5-Kalayaan Ave-Buendia. The truck and my car unnecessarily contributed 5 ½ hours of traffic congestion for 2 days in already traffic-heavy December when there should be none if a simple traffic violation ticket was issued.

My request and appeals:

1. Reeducate Mr. Dayaon for being either ignorant of the regulations he implements or being a liar.

3. MMDA to consider “grey areas” like the driver is outside when the towing team arrives but it is obvious that he/she will appear anytime because there are children/people inside the car who do not know or not authorize to drive the car. Towing should not be done in this case. If my 11 yo daughter knows how to drive, she could have moved the car.

4. Remind or penalize Fighter Towing Co., other towing firms, for violating MMDA rules that towing  crew have no right to board and drive a private vehicle, a private property, if the driver or owner is inside.

6. Revise the rules on towing so that if the towing firm is found to have abused its power, it should pay the car owner 2x or 3x the assessed towing fee.

7. Finally, consider revising MMDA rules on towing-impounding to minimize this practice because (a) this actually worsens traffic congestion in the metropolis, not reducing it, (b) it fans some public perception that government in general and MMDA in particular are a bunch of insensitive people, and (c) the state should not confiscate private property on minor or frivolous offenses. Just issue a violation ticket, or clamp the car if necessary. Limit towing and impounding only to vehicles involved in accidents and those  used in committing crimes like robbery and murder as the police need the finger prints, other evidence inside the vehicles.

Attached are my 2 articles published in BusinessWorld. I will also write a third article on this subject soon.

Thank you very much.