In the first week of August this year, I saw seven energy-related stories in BusinessWorld Economy section alone:

The subjects within energy vary but there is one common trend in them — there are government agencies involved in all issues, which implies that electricity and petroleum concerns remain highly politicized until now.

Of those seven stories, the following stand out:

No. 2. What I call Solar para sa Politika. This is a very unique energy company in the Philippines: It is the only power generation company and distributor with a Congressional franchise; it is the only electricity distributor that covers so many provinces and encroaches on the geographical areas of other franchised electric cooperatives; it is the only renewable energy company opposed by almost all other renewable energy developers like Developers of Renewable Energy for AdvanceMent, Inc. (DREAM) because of certain privileges it gets that appear to be un-Constitutional; it is the only energy company whose franchise is questioned or outrightly opposed by other energy industry associations like Philippine Independent Power Producers Association and Philippine Rural Electric Cooperatives Association, major local business associations like Makati Business Club and Management Association of the Philippines, and foreign business groups like the American Chamber of Commerce; and, it is the only energy company whose owner is the son of an influential legislator. The ex-senator headed the Senate Finance Committee, the position alone could terrorize the Department of Energy (DoE) and Energy Regulatory Commission (ERC) and their budget if they join the chorus to oppose the franchise. Shameless corporation.

No. 5. Energy efficiency should be done even without legislation but this one sought legislation to target fiscal perks. The Department of Finance is the natural opposition because it wants to reduce perks and exemptions in exchange for lower corporate income tax (CIT). Another precedent, so other energy sub-sectors would also seek legislation to get their own share of perks and tax exemptions.

No. 7. The DoE knows that the “expensive oil is beautiful” policy under the TRAIN law (Tax Reform for Acceleration and Inclusion) is the biggest contributor to recent high oil prices. For diesel the excise tax, P2.50/liter increase in 2018, P2 this year, sub-total P4.50/liter increase plus VAT on excise tax. And another P1.50/liter increase in 2020. Yet the DoE instead turned its eyes on oil companies and imposed an implicit price control, prohibiting them from raising their prices unless they notify the DoE in advance and submit weekly reports about the components of their pricing. All players have trade secrets, like one has cheaper monthly land rent than others. These business secrets should not be divulged to others.

I also read in another newspaper that the leftist Makabayan bloc in Congress attacked Meralco for entertaining the competitive selection process (CSP) bid of its allied firms. Politicians as much as possible should stay away from the market dynamics of players once the government’s general rules have been issued, like the mandatory CSP instead of the regular bilateral power supply agreements with power generating companies.

So in the above stories, various government agencies aside from DoE and ERC — Supreme Court, Solicitor General, the Board of Investments, Philippine Competition Commission, Congress — are involved in various forms of regulations. Not mentioned there are other agencies that are also involved in power bureaucratization like the local government units, National Commission on Indigenous Peoples, Department of Agrarian Reform, Department of Agriculture.

The Philippines has among the lowest, poorest energy availability when compared with its many neighbors. See these numbers from the International Energy Agency (IEA), Key World Energy Statistics (KWES) 2018 report. (See Table). 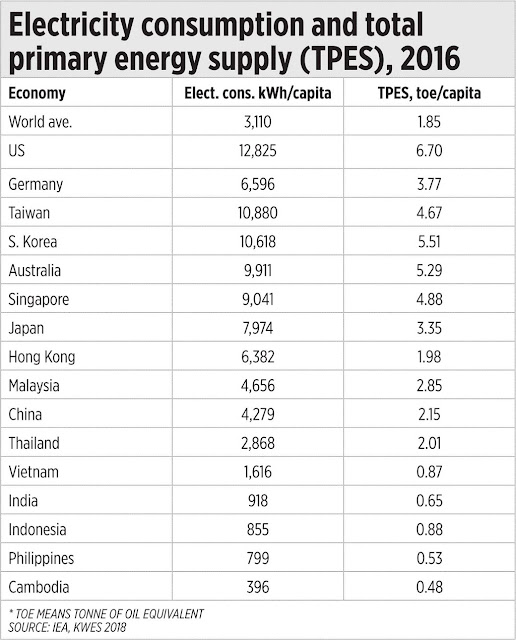 The various energy regulators and law makers from the Executive, Legislative, and Judiciary should be aware and even be ashamed of this poor condition of Filipinos and Philippine-based businesses. Too much government intervention, regulations and prohibitions are bad for more energy development, more power supply addition, and cheaper electricity prices via more power supply addition and competition.

Private players should also avoid seeking new legislation for whatever bleeding-heart arguments they have and help depoliticize the energy sector. Many existing laws like the RE Act of 2008 (RA 9513) are already distortionary, let us not add any more.
----------------