Among the advantages of Brexit. UK can have FTA with many countries outside the EU like the US and its former colonies in Asia like MY, SG, HK, ID. Trump and Bojo now in G7 meeting in France. 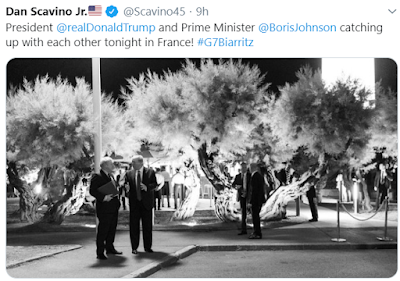 But this report title, "secret talks", why call it a secret when everyone knows that they are meeting in France?

“With Boris Johnson due to hold talks today with Donald Trump at the G7 summit in Biarritz, allies of the US President have made it clear that the two countries are on the verge of a major deal. The prospect of a UK-US deal also appears to be putting huge pressure on the EU to compromise and yesterday there were signs that Brussels’ hard stance against renegotiating a deal was wavering. European Council President Donald Tusk made a volte face on his uncompromising position early in the week where he refused to discuss removing the Northern Ireland backstop….

The UK-US trade agreement is expected to be signed when the Prime Minister and President Trump meet at the UN General Assembly in New York in September.”

“There are massive opportunities for UK companies to open up, to prise open the American market. We intend to seize those opportunities but they are going to require our American friends to compromise and to open up their approach because currently there are too many restrictions,” he said on Saturday.

Mr Johnson set out several areas in which he wanted to see trade liberalised between the UK and the US — including railway carriages, wallpaper, pillows, beef, lamb, cauliflowers, British peppers, bathroom fittings and pies." 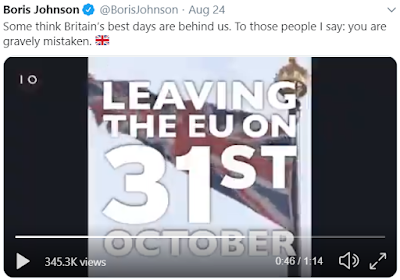 “Free trade is a condition characterized by the absence of trade barriers. Establishing the most important conditions for free trade—the elimination of domestic barriers—requires no formal agreements between or among governments. It is misguided to believe that the economic freedom of people living in one sovereign nation should depend on the consent of a foreign government. But the benefits that accrue to producers, workers, consumers, and taxpayers when their own government eliminates or reduces its own trade barriers—regardless of whether a foreign government agrees to do the same for its citizens—are ample and well-documented.

The stories behind the compelling 20th-century economic turnarounds in places such as Hong Kong and Singapore, Australia and New Zealand, Chile and Mexico, and China and India have in common the commitments of those governments to deep and broad unilateral reforms. Those examples and others notwithstanding, trade liberalization throughout history—and especially over the past 85 years—has followed a model best described as “mercantilist reciprocity.”

Historically, free trade agreements have not been about “free trade” per se. These deals are
better characterized as managed trade agreements because they tend to simultaneously liberalize, divert, and stymie trade and investment flows. Whereas some parts of these agreements
clearly reduce barriers, other provisions work to insulate incumbents and the status quo from
dynamic, competitive forces….”

“The US president said the pair had spoken since Mr Johnson became prime minister and that they plan to spend time together to formulate an agreement.

Downing Street confirmed that talks between the two leaders had taken place on Friday evening and that they would meet at a G7 summit in Biarritz, France, next month.