THE Intellectual Property Office of the Philippines (IPOPHL) said it proposed to the Supreme Court the creation of more courts specializing in commercial matters to handle intellectual property rights (IPR) cases.

“We believe the designation of additional SCCs to be located in the Visayas, Mindanao, and Northern Luzon will further bolster the Philippines’ standing in the areas of rule of law and administration of justice and will be beneficial, as this will serve a greater number of stakeholders,” Ms. Santiago was quoted as saying.

According to IPOPHL, SCCs are only located in Pasig, Makati, Manila, and Quezon cities.

“The request is made amid increased IPR cases over the years, relating particularly to trademark infringement,” IPOPHL said, adding that it will submit a report to the SC showing the effectivity of having courts focusing on IPR cases in other countries help in disposal and declogging of dockets.

It also requested the designation of Regional Trial Courts specializing in IPR cases as the SCCs for all commercial cases.

“The proposal of IPOPHL will indeed be seriously taken into consideration by the Supreme Court,” he said.

“However, there must be a formal resolution by the SC en banc before additional commercial courts are designated,” he added. — Vann Marlo M. Villegas

(2) Supreme Court and IPOPHL to work on speeding up disposal of IPR cases
Published on August 5, 2019
https://www.ipophil.gov.ph/news/supreme-court-and-ipophl-to-work-on-speeding-up-disposal-of-ipr-cases/ 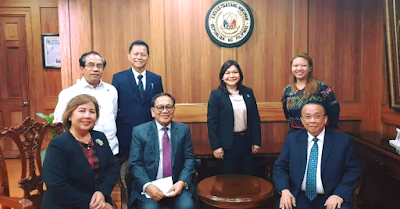 THE BOARD of Investments (BoI) and the Intellectual Property Office of the Philippines (IPOPHL) have agreed to promote the commercial use of registered intellectual properties by linking these to investors.

The two agencies signed a memorandum of agreement (MoA) on July 23, 2019 for the project, which is also in line with the objective of the BoI to attract more innovation-driven investment.

“While we continue to outperform ourselves in promoting investments, we still need to attract new investments that are considered ‘innovation drivers’ under the 2017-2019 Investments Priorities Plan (IPP),” he said.

Mr. Rodolfo, who is also Trade undersecretary, enumerated these drivers to include research and development (R&D) activities, conduct of clinical trials, the creation of so-called “Centers of Excellence,” innovation centers, business incubation hubs, fabrication laboratories, and co-working spaces, and the commercialization of new and emerging technologies and products of the Department of Science and Technology or government funded R&D.

Through the MoA, the agency will be part of IPOPHL’s Mind2Market Network, which will tap the existing programs of BoI, such as the One Window Network (OWN) and the Trade and Industry Development (TID) Talks, to create stronger linkages between creators/inventors and investors.

BoI said it had also agreed to create communication channels with IPOPHL “to ease technical consultations on matters related to innovation, including on new and emerging technologies that are registrable with the BoI.”

It said the move would also facilitate the resolution of issues that industry stakeholders might face in the registration, recognition and enforcement of intellectual property rights.

The agency quoted IPOPHL Director General Josephine R. Santiago as saying that the partnership “should excite all creators and innovators.”

BoI said the “patent landscape reports” being prepared by IPOPHL would help the investment promotion agency to identify gaps that require foreign investments to bring technologies into the country. — Victor V. Saulon

The Intellectual Property Office of the Philippines (IPOPHL) has expressed delight with the results of the latest Global Innovation Index (GII) report, viewing the Philippines' huge improvement in both ranking and score as the concretising of the country's efforts to put innovation at the center of its economic, socio-cultural, and scientific development….

The 2019 GII report showed that the country is now placed within the top 42% innovative economies, pulling it closer to the frontier as compared to the past four years when it has annually been within the 60% top countries. This, as the Philippines landed 54th from 73rd in the previous report, making the country the most improved among its peers in the Association of Southeast Asian Nations (ASEAN).

The Philippines also entered for the first time into the group of innovation achievers—economies that outperformed on innovation relative to GDP—for 2019 as it booked above-average scores in all innovation dimensions, with the exception of market sophistication, relative to its lower-middle-income peers….

… A wide range of foreign industries are now looking towards Southeast Asia, not just to take advantage of an abundance of cheap labour for production of goods for export, but also to tap into new consumer markets formed from a growing middle class population. But the less developed nature of business-related legislation means the dangers of intellectual property (IP) infringement are often great.

Particularly, the development of IP laws across South-East Asia has been uneven and IP laws in many South-East Asian countries are still being developed and revised to be in alignment with international standards.

This table below provides a summary of the status of accession of South-East Asian countries to key international IP Treaties and Agreements in relation to the ten countries of the ASEAN Economic Community.[2]

Unlike the EU, which has a unified instrument directing IPR enforcement, South-East Asian countries do not yet share the same level of cooperation, resulting in comparatively fragmented IPR enforcement laws and regulations.  Implementation of IPR laws across South-East Asian countries vary from one another.another , This is mostly due to the diversity of culture, history and laws in the region.  The Association of South-East Asian Nations (“ASEAN”) however has established the ASEAN Working Group on Intellectual Property Cooperation (AWGIPC)[1]which aims to align and streamline IP rights and practices across the region, and more changes should be expected from this collaboration…
-------------------