My lawyer-friend JB Baylon posted in my fb wall the other day this note and news report,

“My friend Nonoy Oplas will say that this is a bunch of cow dung.”

I commented that the term "cow dung" is not mine, it's his. It is unfair for cows to be compared with the Clinton News Network (CNN). Cows are not involved in systematic, deliberate fake news production. CNN is. So my term is "CNN dung" or "CNN fake news."

For instance, these sentences from that report are fake news.

1. "the melt season typically begins around the end of May."
Fake. melt season usually starts mid-March.

2. "melt season typically lasting to the end of August"
Partly fake. melt season ends around mid-September. From there, ice will grow, 100%.

"ice growth season will soon start around second half of September, up to mid-March the next year."
True story. And we will not find that in this and other CNN alarmist stories. 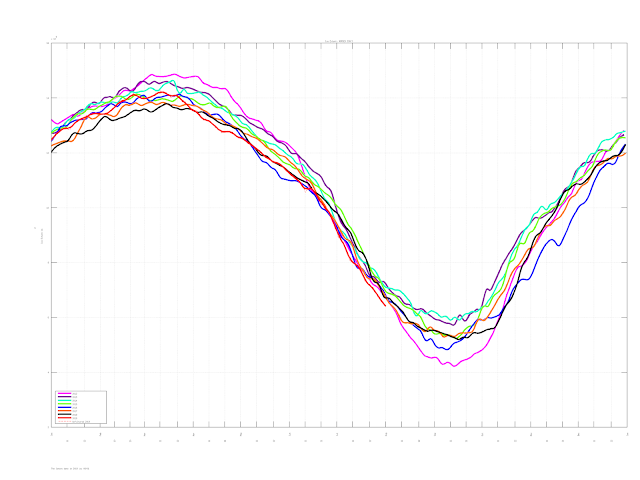 "Greenland Melting in the news. This is another example of a few activist scientists (and the usual warmmongers) finding a way to get the public stirred up and interested in the Climate Emergency. The few days of reported extra surface melt was just after a few days of extra gain (which wasn't reported on). But it doesn't matter, because the latest study of the Greenland ice sheet mass balance says even decadal time scale changes can see-saw back and forth and are not indicative of long term trends. They estimate 2/3 of the long-term ice loss on Greenland is from increasing discharge from glaciers at the ice sheet periphery. I would bet that increase is the delayed result of extra snow accumulation many years ago (it takes a long time for ice to flow hundreds of miles downhill). It's a complicated problem."

From the paper’s Abstract:

"Even in years of high SMB, enhanced glacier discharge has remained sufficiently high above equilibrium to maintain an annual mass loss every year since 1998."

"found this plot of reconstructed Greenland temperatures up to 1990 on Wikipedia (History of Greenland). Looks like someone forgot to Hockey Stickify the data... it was no warmer in 1990 than 1,000 years ago."

"So IF the Greenland ice sheet were to lose 103 billion tonnes per year into the indefinite future, it would take about twelve thousand five hundred years to lose half of it …

“… climate denialism is closed minded. It thinks it knows the truth and wants to interpret the evidence to suit that.”

That term “climate denialism” is stupid-idiotic. ALL skeptics that I know recognize climate change (CC). No one denies CC, we've had CC since the past 4.6 B years. What is being questioned is the adjective "anthropogenic" CC. The debate is whether current CC is "man-made"/anthropogenic or "nature-made"/natural, cyclical.

Fake news all around. Here’s a good advice from Dr. Spencer,

“Climate change — it happens, with or without our help.”
http://www.drroyspencer.com/global-warming-natural-or-manmade/

Well, this is the real and true story, not fake news.

“July 2019 was probably the 4th warmest of the last 41 years. Global “reanalysis” datasets need to start being used for monitoring of global surface temperatures.”

Meanwhile, the country leader that many people so despise, US President Trump, has the brain and political will to pull the US out of Paris Agreement (2015) and hence, tell the UN, Al Gore, etc that CC is cyclical, warming-cooling, and there is no need to penalize American taxpayers to contribute to $100 B a year, even $500 B a year suggested by other scammers, of climate money.

In contrast, former President Obama gave away $1B to UN climate fund in his last 1-3 months in office, without Congress authorization. UN climacrats were so desperate for more, bigger climate junkets they needed more tax money, Obama gave them the money as if it comes from his own pocket.

The whole UN, Al Gore climate drama is 100% corruption. Less rain or more rain, less cold or more cold, less dogs or more dogs, taxpayers should send more money to them and they will "save the planet".

This is a systematic, large-scale, global project to fool the people around the world so that large scale transfer of money via carbon taxes, endless environmental regulations and prohibitions with big fines and penalties, can be instituted.

This is a 100% political science project that masquerade as climate science. The twisting of facts and science are so raw, so blatant that even an honest elementary biology teacher can protest -- declaring CO2 as pollutant gas. Can people really believe that? The gas that they themselves, their family and friends exhale, the gas that their pets and farm animals, wild animals exhale, is a pollutant? Wow.
--------------