The Duterte government’s fiscal and expenditure program can be briefly summarized and characterized as one of over-spending and over-borrowings. Four proofs in three tables below will show why.

Compared to seven other neighbors, the Philippines has the biggest improvement, major decline in debt/GDP ratio at nearly 13% over the past nine years while China has the biggest deterioration, major increase of 16% over the same period. (See Table 1.)

Two, the level of spending despite rising revenues is huge, resulting in ever-rising budget deficit, from P558 billion in 2018 to projected P824 billion by 2022.

High deficit means high borrowings aside from high taxes. And so the interest payment alone, principal amortization not included yet, will double from P249 billion in 2018 to P504 billion in 2021, and further rise to P561 billion in 2022. Data are from the Department of Budget and Management’s Budget of Expenditures and Sources of Financing (BESF) 2020.

Three, while actual GDP growth was higher than target/projections and inflation was lower than target in 2016 (last half-year of previous administration), it was the opposite by 2017 to present, growth was lower than target and inflation was higher than target from 2018 to present. Multiple tax hikes under TRAIN (Tax Reform for Acceleration and Inclusion) law implemented in 2018, uncertainties of TRABAHO (Tax Reform for Attracting Better and High-Quality Opportunities) bill and other legislative proposals contributed to growth deceleration: 6.9% in 2016 to 5.6% in the first half of 2019. (See Table 2.) 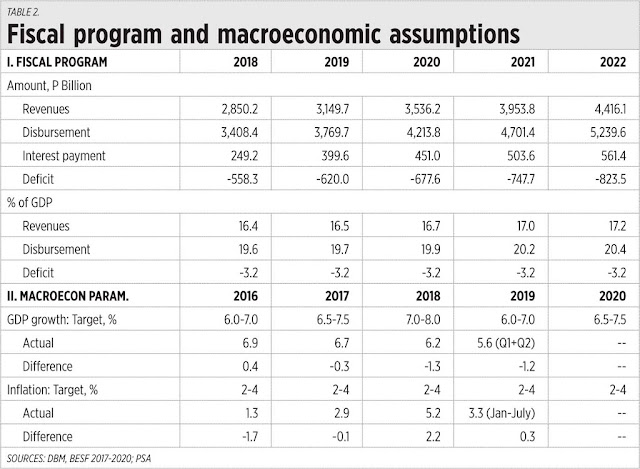 It seems that the National Economic and Development Authority-Department of Finance — Department of Budget and Management triumvirate were using false assumptions in their growth and inflation projections. Like their assumption that tax hikes in oil, other products under TRAIN law would be low or insignificant — wrong.

Four, the bulk of high spending goes to salaries, meetings, travels, offices plus expanding subsidies, not in Build, Build, Build as often claimed. If we remove interest payment and bank charges, then allocation to local government units like the Metropolitan Manila Development Authority and Internal Revenue Allotment for provincial LGUs, most of which goes to salaries too, the combined shares of personnel services and Maintenance and Other Operating Expenses would be 70% and capital outlays for Build, Build, Build is only 30%. (See Table 3.) 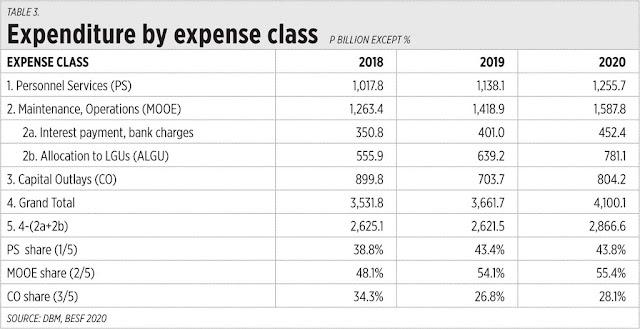 What then to expect in the next few years?

What else but more taxes and regulatory fees. Public debt and interest payment keep rising, new agencies and departments are created, new welfare subsidies are invented and expanded, government personnel and consultants, national to local governments, their pay and perks keep rising.

While it is true that there are Build, Build, Build projects on-going, they are small compared to the hype and promises. It is possible to have faster growth and lower inflation with retained or lower budget, less taxes and borrowings. People and businesses keeping more money in their pockets and savings will prefer more investments, more integrated Public-Private Partnership infrastructure projects, and more household consumption.
-----------------