Climate Tricks 86, Cannibalism and eating bugs to 'save the planet'

I have another climate debate with a friend last week when he posted this weird article in my fb wall,


(Why) The Next 3000 Days Will Decide the Fate of Human Civilization
How The Four Greatest Existential Threats in History Will Conquer Us This Decade — Unless We Conquer Them
umair haque  Sep 7 2019
https://eand.co/why-the-next-3000-days-will-decide-the-fate-of-human-civilization-213e3f0561b6

Garbage in, garbage out. 3,000 days? Whaaat? I thought we only have 3,000 hours left?
I have little patience for long, literary, wordy papers with no tables, no charts or graphs, no hard data. Garbage is easier spread via wordy, emotional papers.

There are now many ways to extend the "3,000 days" Armageddon to perhaps 3,001 days left -- via cannibalism. Instead of eating more meat (more cow fart, more methane, which is one of several "catastrophic" GHGs), people should eat other people when others die. Very bright this cult called 'save the planet.'

Swedish behavioural scientist Magnus Söderlund has suggested that eating other people after they die could be a means of combatting climate change.
The scientist mentioned the possibility of cannibalism during a broadcast on Swedish television channel TV4 this week about a fair in Stockholm regarding “food of the future”.

Or instead of eating other people, they can eat cockroaches, termites, to 'save the planet.' Very idiotic proposals.

Would you eat insects to save the planet from global warming?
Jessica_E_Brown
Mon 15 Oct 2018 09.10 BST Last modified on Mon 15 Oct 2018 14.21 BST
https://www.theguardian.com/commentisfree/2018/oct/15/edible-insect-save-planet-global-warming-tasty-trendy

Would eating insects save us from climate change?
Camellia Williams  Jan 17 2019
https://medium.com/vizzuality-blog/would-eating-insects-save-us-from-climate-change-a7d9b1ad01f9 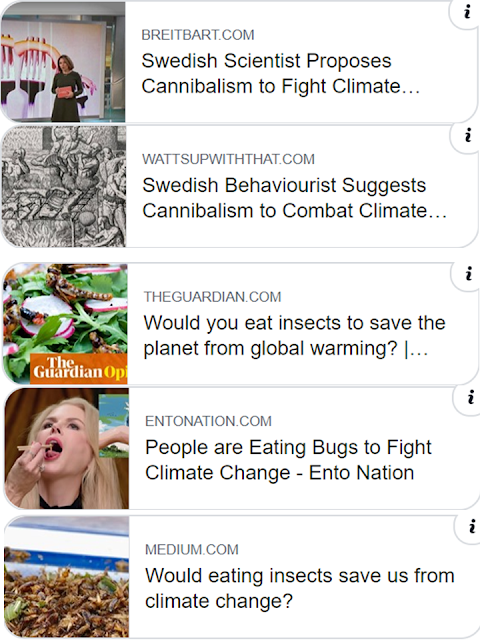 Those feed in tariff (FIT) in our monthly electricity bill; the higher oil/lpg/coal taxes in TRAIN law, the annual budget of CCC, higher climate budget of DENR and LGUs, billions of $ of climate loans from WB, ADB, etc -- those are ALL products of all these climate robberies and scam. All they want is more people sharing and spreading alarmist, frankenstein stories -- and that helps their rackets and junkets.

It is difficult to refute a derange argument -- that less rain or more rain, less flood or more flood, less dogs or more dogs -- ALL proof of 'man-made' Gorebal warming. And such deranged idea comes from the world's biggest and influential institutions like the UN.

The argument is as crazy as this: Mr. X and family have less money and more money, proof that they are poor, so taxpayers should keep sending them money, subsidize them forever.