“All creation is a mine, and every man, a miner… In the beginning, the mine was unopened, and the miner stood naked, and knowledgeless, upon it… Man is not the only animal who labors; but he is the only one who improves his workmanship. This improvement, he effects by Discoveries, and Inventions…”

The Protection of companies’ intellectual property rights (IPR) is very important to encourage more innovation and discoveries, as observed by Abraham Lincoln. And among the big issues in the ongoing US-China trade war are those related to IPR — forced technology transfer, if not outright stealing of the intellectual properties (trademark, patent, copyright, trade secrets) of US and other Western companies by Chinese companies including their state-owned enterprises.

I found this data on product counterfeiting, which reflects the smuggling of pirated commodities, from the US Chamber of Commerce’s Global Intellectual Property Center (GIPC) report, “Measuring the Magnitude of Global Counterfeiting” (2016). China plus Hong Kong corner the bulk of such IPR infringement. Note that the Chamber is a private organization, not a US government body and, hence, more objective in its assessment of the degree of IPR stealing (See table). 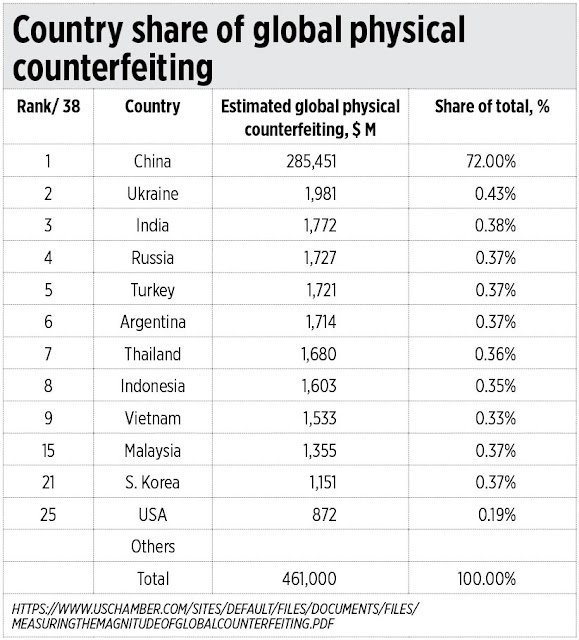 At the BusinessWorld Industry Summit 4.0 held at Shangri-La at The Fort in BGC yesterday, IPR was not highlighted but it is among the assumed prerequisites, along with physical, financial property protection, for companies to engage in endless innovation and competition in the Fourth Industrial Revolution (FIRe).

Anthony Oundjian, Managing Director and Senior Partner of the Boston Consulting Group, emphasized the value of people and their creation — they comprise some 60% of total FIRe inputs, while processes comprise 30%, and technology, 10%.

Senator Grace Poe said that “innovations are unfolding at breakneck speed” while legislation takes years for important bills. She mentioned the 1936 law, the Public Service Act (PSA), which has restricted foreign investments and technology transfer in the country. The new bill amending the PSA will liberalize foreign investments in transportation (land, sea, air) and telecommunications, and limit “public utilities” — where foreign investments is limited — to only three sectors, namely, distribution and transmission of electricity, and water distribution. This bill should be among the priorities for legislation and enactment into new laws.

Dr. Jose Ramon Albert, Senior Research Fellow of the Philippine Institute for Development Studies discussed the potential labor displacement of robots, artificial intelligence, and other FIRe technologies, and what government and other stakeholders can do.

Looking at the list of major and minor sponsors of the BusinessWorld conference, they are just represented by their logo and one-word corporate name. The logo and brand say it all, both old and new companies from different sectors and industries. Which speaks of the underlying importance of IPR and brand protection.

Related to all this, two IPR-related reports will be launched in Makati over the next few weeks. On Sept. 24, the Geneva Network (UK) and Minimal Government Thinkers (MGT) will launch a new report, “The importance of IPR for progress: reform agenda for ASEAN countries.” Four other independent and market-oriented think tanks from Malaysia, Indonesia, Thailand, and Vietnam are co-producers of this report. Department of Trade and Industry Secretary Ramon Lopez will be the keynote speaker. Philip Stevens of the Geneva Network and yours truly will present the report. Reactors will be Jess Varela of the Philippine Chamber of Commerce and Industry, and Kristine Alcantara of the Foundation for Economic Freedom (FEF).

And on Oct. 16, the International Property Rights Index (IPRI) 2019 Report will be launched by the Property Rights Alliance (PRA, Washington DC, USA) in partnership with FEF and MGT. The author of the report, Dr. Sary Levy-Carciente who is a Venezuelan economist, PRA Executive Director Lorenzo Montanari, and Chris Butler of the Americans for Tax Reforms will come to Manila to present the report.

Both events are by invitation only but we will consider some interested individuals outside the list — just send me an e-mail.

With FIRe technologies and, in the next few decades, the Fifth Industrial Revolution, even more modern, seemingly impossible inventions and creations will emerge. Companies and individual researchers will just keep producing those new inventions and processes. The role of government is to ensure protection of private property, their inventions and corporate identities and brand.
----------------

Posted by Bienvenido Oplas Jr at 12:10 AM