BWorld 369, Copyright and trademark in the ASEAN

“A power ‘to promote the progress of science and useful arts, by securing, for a limited time, to authors and inventors, the exclusive right to their respective writings and discoveries.’… The right to useful inventions seems with equal reason to belong to the inventors. The public good fully coincides in both cases with the claims of individuals.”

This argument by Madison would be among the basis for the enactment of the USA’ first copyright law in 1790. The US patent law was also enacted that year while its trademark law was made in 1881, revised and expanded in 1905.

The Philippines’ law on these are contained in the Intellectual Property Code of the Philippines (RA 8293, 1997). A report in BusinessWorld, “Intellectual property applications climb 11% in first half” said: 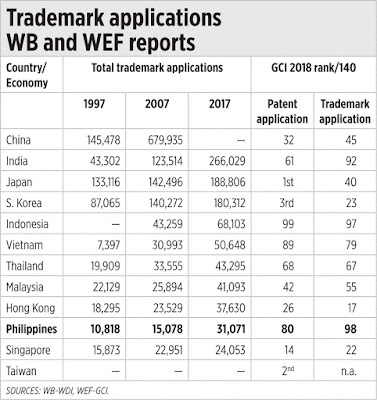 The good news for the Philippines then is that we are fast catching up on the use of intellectual property rights (IPR). Trademark applications have doubled from 2007 to 2017, and for copyright, IPO’s first half data for 2019 show a huge increase of more than 50%.

Recall also that the fastest-growing sub-sector in the Philippine economy over the past 5-1/2 years, 2014 to H1 2019, is intellectual property products, under Capital Formation (or private investments). It was growing at 28% per year, capital formation growing at 14%, and GDP at 6.3%.

Fast growth in IPR use also means fast growth in IPR infringement. This was tackled in the last panel of the BusinessWorld Industry Summit 4.0 last week, Sept. 9, at Shangri-La at The Fort at BGC. The last panel was about “Content and piracy” with speakers from the Coalition Against Piracy, the Optical Media Board, Globe Telecoms, and a film director.

So the role of the state in protecting private property, both physical and intellectual property, is reasserted by the current situation. And on this, two IPR-related events will be co-sponsored by our think tank, Minimal Government Thinkers (MGT).

The first is the launching of a new report, “The importance of IPR for progress: reform agenda for ASEAN countries,” in partnership with Geneva Network (UK), on the afternoon of Sept. 24 at the Holiday Inn Makati. Department of Trade and Industry (DTI) Secretary Ramon Lopez will give the keynote speech and, since the DTI is the mother agency of the Intellectual Property Office, he has a good overview of the sector in relation to the overall trade and investment environment.

The second is the global launch of the International Property Rights Index (IPRI) 2019 by the Property Rights Alliance (PRA, Washington DC) on Oct. 16 at Fairmont Hotel Makati. MGT and the Foundation for Economic Freedom (FEF) will be the local partners in launching this big event. The author of the report, Dr. Sary Levy-Carciente, and PRA Executive Director Lorenzo Montanari will come to Manila to present the report. Both events are by invitation only, but we will consider some interested individuals working on the sector who are not in our list. Send me an e-mail.

Private property is the cornerstone of economic freedom and free enterprise. Both physical property and intellectual property. Investors come if they are assured that their offices, investments, corporate brands/trademarks, patented and copyrighted inventions are respected and protected by the government against pirates and IPR thieves.
--------------