It is pathetic that people often politicize many things, whether food or medicines or electricity. Like creating a new energy company by legislation instead of the normal ERC-SEC process, or getting the Supreme Court to stop implementation of certain provisions of the EPIRA law of 2001 (RA 9136) such as the retail competition and open access (RCOA).

The Philippines, till today, is among the countries with the lowest electricity generation in Asia, both in absolute amount and per capita. I derived the per capita electricity production below from two data sources: generation from BP Statistical Review of World Energy (June 2019), and population from IMF World Economic Outlook database (April 2019). (see table 1) 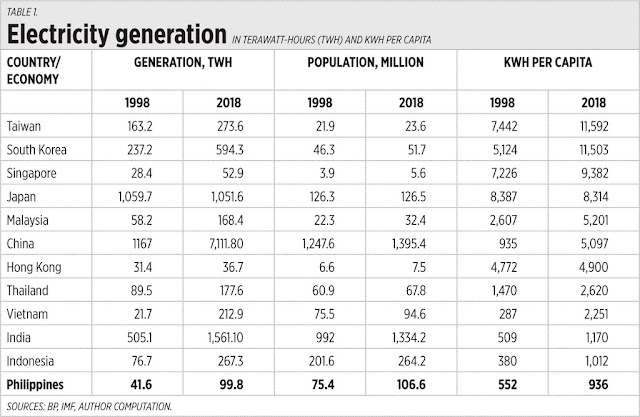 We need to stop further politicizing the power sector because low power capacity automatically means that electricity prices will remain high as demand continues to rise. We should encourage more generation companies (gencos) to build more power plants and compete with each other in supplying (1) electric cooperatives, (2) private distribution utilities (DUs), (3) retail electricity suppliers (RES), and (4) the Wholesale Electricity Spot Market (WESM). More market competition will lead to lower prices while more political intervention will lead to higher prices as gencos, DUs and RES have to factor in the cost of politics and more regulations and restrictions.

Recently, leftist Bayan Muna led by ex-Cong. Colmenares and Cong. Zarate went to the Supreme Court (SC) to stop the implementation of another provision of EPIRA law, the competitive selection process (CSP) on certain DUs. The target, as usual, is the biggest DU in the country, Meralco — demonized for entertaining a sister genco company. Earlier, there were attempts to stop — also via politics — this big DU from getting supply contracts from new big coal plants (to help “save the planet,” the protesting party-list said).

Is it possible that big non-coal plants and companies — say, big gas plants — are desperately trying to stop these coal contracts to force Meralco into buying their power after these new coal plants have been demonized and isolated? If so, it’s a lousy and ugly business model; and lefties are playing along.

Below I try to derive why there were many yellow and red alerts from March to July this year, and how much estimated available power there was during those five months.

First, I computed the implied capacity factor (ICF, measured as: ICF = (Generation)/(installed capacity x 24 hours x 365 days). For oil plants that are used mainly for peak load, I assumed an ICF of 70%, running for only around 6 hours/day for 200 days. From the ICF, the implied available capacity (IAC) can be derived (see table 2). We should have reserves of at least 20%, not 2% or even -7%. Of course, there are power plants from the Visayas grid to augment Luzon, but Visayas provinces are also growing fast on their own.

Lefties like Bayan Muna have bad analysis and lousy mathematics in assuming that things in the power sector will be okay in the coming years. More politics, more Congressional harassment, and SC’s TRO will not protect the public from blackouts and high electricity prices.


They should not announce their intellectual mediocrity and do more realistic power projections. Neither should they drag the country toward darkness, as dark as their leftist philosophical advocacies.
-----------------

Posted by Bienvenido Oplas Jr at 9:46 AM