My former teacher at the UP School of Economics (UPSE), among my favorite and respected teachers in UP Diliman, Dr. Emmanuel "Noel" de Dios, wrote a paper "Anthropocene", https://www.bworldonline.com/anthropocene/ (Feb. 8, 2021).
I wrote a blog post criticizing portions of his paper,
Climate 95, Anthropocene, Extended La Nina, carbon tax.

I sent it to him and since we're friends, he replied to me and further expanded his belief on the Anthropocene hypothesis. Many people call it a theory (meaning, tested and proven hypothesis) but I don't believe that, it remains a hypothesis that can melt down with many actual world data. I replied back to him and got his permission to post and blog it. Here goes:

Dear Nonoy,
Criticisms are most welcome! I thank you in fact for even bothering to read my little piece. Although you may represent a contrary viewpoint, I think you provide a real service in making people aware of the issues involved and the facts they must confront on either side in the process of making a judgement.
Just a minor point though: I realise you have been most involved and informed about the climate change debate. But although climate change is part of the argument regarding human impact on the planet and the decimation of the natural environment, it is not everything -- and I don't think my concern ("alarmism") relies on it alone. The sheer size and spread of the human population and our growing technological ability to reshape the natural environment to our needs is what is at issue. And it would be a problem even in a zero-carbon emissions environment. We would even then probably still continue to destroy forests and natural habitats (e.g., possibly using electric saws and EV tractors) in order to make way for large-scale agriculture, pasture lands; we would continue to level mountains to extract minerals (maybe using fuel-cell baggers), we would continue to expand urban settlements even with "green" buildings, and maintain and care for only the animals that we find consumable or cuddly and cute. Rising human population and the concomitant rise in consumption that goes with rising living standards would still grow faster than the ability of the natural environment to heal or regenerate itself.  Among others, biodiversity, which is the concern of Dasgupta et al. would still be drastically reduced. To be absurd, I suppose with enough technological change one might still imagine a world where flora and fauna might be preserved and catalogued as genetic material in test tubes and reproduced at will for display and enjoyment, using something like Star Trek's Replicator Machine. The question is whether that is the future we imagine not only for ourselves but for  generations to come. How much of the natural environment do we choose to preserve and in what form? That such a question can even be posed is one of the characteristics of this unique period when we have the choice of whether and how to adapt nature to our existence, rather than (as was the case for most human history) of adapting our existence to nature. That was my main point, and I think it is larger than the climate debate, although it includes it.
All the best,
Noel
Thank you, Sir Noel.
Me thinks that 7.6 billion people on earth is still small. 15 B, 30 B would still be fine.
Humanity's problem is that there are too many "conservation" concerns like anti-mining. On the other hand, we need more dams, more man-made lakes via open-pit mining and leave the open crater as is, for natural water catchments. Our problem in the PH and other tropical countries is not lack of water but too much water, during the wet season too much flood, water just go straight to human communities then to the sea.
With more vertical housing  and offices (more mining for steel, iron ore, copper, cement,...), the most "green" cities are the developed cities like NYC, Singapore, even Makati and QC. Vertical structures for human settlement and work, manufacturing, hospitals, etc. free up wide land that becomes urban forest park, etc.
As I posted in one chart on life expectancy, the endless "crisis" narratives come in one package. Population crisis, food crisis, hunger crisis, oil crisis, garbage crisis, NCDs crisis, climate  crisis, virus crisis,... ALL false. They are termed as "crisis" and human-made because the agenda is man-made solutions, which are govt, UN, multilaterals solutions. Lousy and corrupt. Very corrupt.
Permission to use your comment above Sir, for another blog post?
Thank you.
Nonoy
Dear Nonoy,
Sure, why not? My constant worry when writing short notes and casual remarks however is that I do not do full justice to the arguments and evidence -- both to support my own side and that of my oppositors. There is almost always more to be said.
Best,
Noel
------------

More proof that the Anthropocene hypothesis is wrong.

1. Continuing improvement in human lives despite all the endless "crisis" narratives that we read and hear, see this summary from https://www.humanprogress.org/ylin/.

2. No major "extinction of species", an e xample is the Philippine tamaraw, water buffalo endemic in Mindoro island, believed to be "extinct" with zero trace since 1992 -- no sightings, no footprints, no manure, etc.

3. Human sustainability, humans keep improving food production capability. Having several billions people more in the planet can be fed even with same area of agri land. Top chart coarse grains yield per hectare, lower chart cereals yield per hectare. There is overall increase through time across many countries. 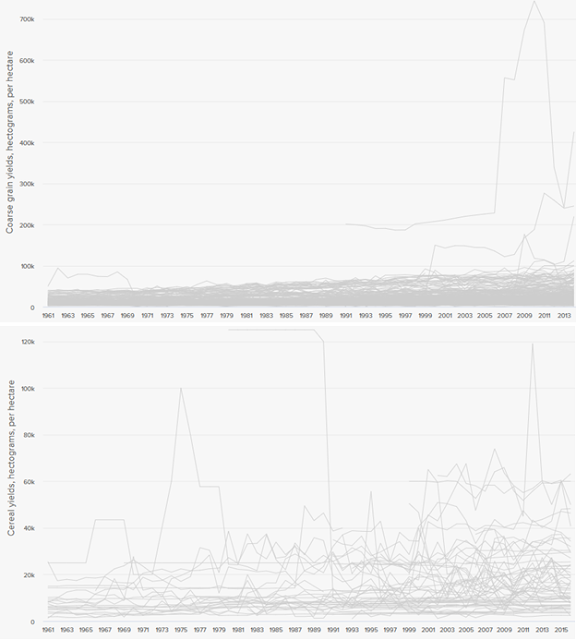 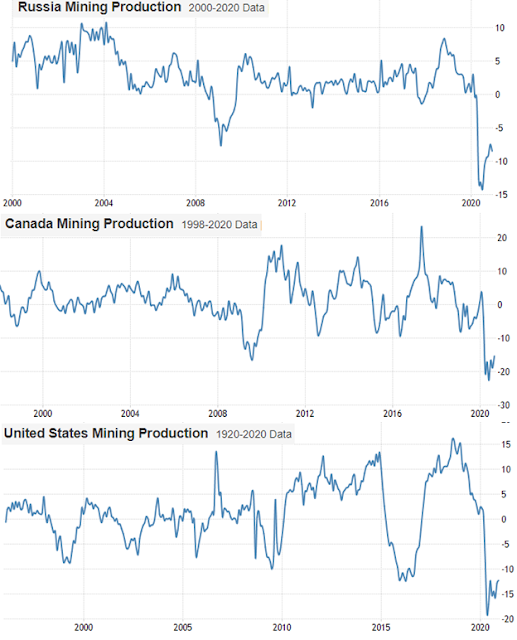 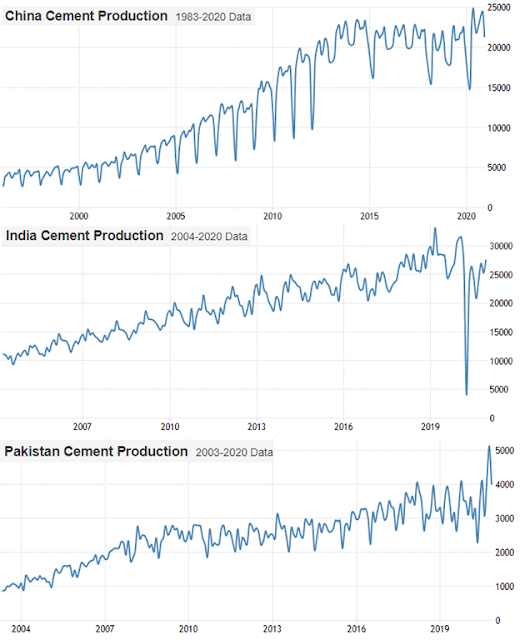 More data available if one will dig them more. Bottomline -- we are far from that Anthropocene hypothesis, where human activities have significant, adverse impact on the planet's ecosystems and climate. Maybe when human population has reached 100 billion. But at 7.8 billion estimated 2021 population, still far out. Anthropocene hypothesis is driven by endless crisis and alarmism narratives, which are all lousy. And corrupt.

Posted by Bienvenido Oplas Jr at 9:29 AM