This piece will cover four different topics, so I will go straight to the data.

The Philippines in 2020 was Asia’s worst performing economy: from GDP growth of 6% in 2019 it contracted 9.5% in 2020, a dive of 15.5 percentage points. In addition, the Philippines has the biggest contraction in industrial and manufacturing production among major Asian economies.

These should have alarmed President Rodrigo Duterte and the Department of Health-led Inter-Agency Task Force (IATF) because it is clearly their strict and indefinite lockdown policy that pulls the economy downwards. Data from the Google COVID-19 Community Mobility Reports (GCCMR) especially for transit stations (TS) shows that until December 2020, the Philippines had the least mobility of people from the baseline period of late January to February 2020.

The extent of the continuing lockdown in the Philippines is not justified based on COVID-19 deaths per million population (CDPMP). Aside from major Asian economies, I included the two largest economies in each region — North America, Latin America, and Europe — on the indicators listed below. The six countries in these three regions and continents have CDPMP of six to 15 times what the Philippines has. With little or no lockdown, Taiwan and Vietnam have managed to grow both in GDP and industrial production (see Table 1). 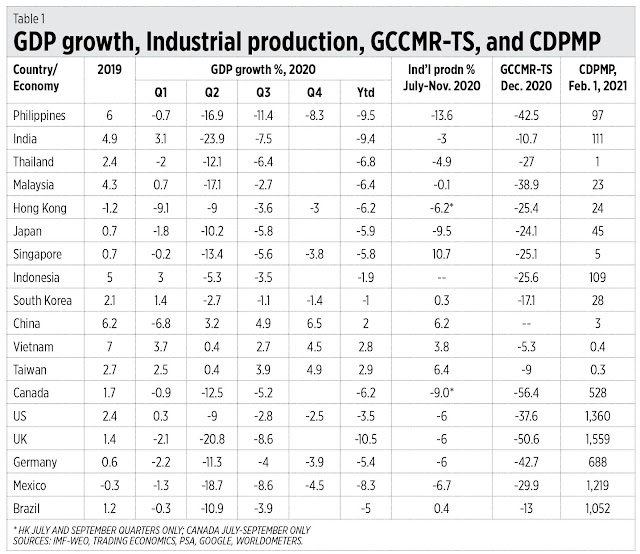 This column on Jan. 12 noted the P70-billion budget for COVID-19 vaccine procurement, storage, and distribution in the General Appropriations Act (GAA) 2021 (see https://www.bworldonline.com/10-big-changes-in-the-2021-budget/). It turns out that the total vaccine budget for 2021 is twice that amount, it is P140.5 billion: a.) P70 billion from GAA 2021, b.) P48 billion from low cost and long-term loans from multilaterals, c.) P20 billion from government corporations and finance institutions, and, d.) P2.5 billion from the health department budget.

The indefinite lockdown policy has the implicit message of endless scaremongering to justify this huge vaccine budget for 2021 considering that there are big national and local elections in 2022.

Last week, on Jan. 28, the Philippine Chamber of Commerce and Industry (PCCI) Muntinlupa Chapter, headed by its president, Elvie Sanchez-Quiazon, and team, held a “Colloquium on COVID-19 Updates and COVID Vaccine Awareness.” The four speakers were all doctors: Rabindra Abeyasinghe, World Health Organization Country Director for the Philippines; Department of Health Undersecretary Maria Rosario Vergeire; Benigno Agbayani, Jr., Founder  of Concerned Doctors and Citizens of the Philippines (CDC PH); and Maria Theresa Tullao, Head of the Muntinlupa City Health Office (CHO). I was the sole reactor to the four speakers. I mentioned the above data on vaccine procurement when I reacted to Usec Vergeire’s presentation.

“DILG (Department of the Interior and Local Government) says Cha-cha will help economic recovery from COVID. Strange that no other country today is amending their Constitution for that purpose.”

That is from one of my sharp-eyed friends. Charter change discussions in Congress suddenly resurfaced in early January, in time for the big public discussion and Senate hearings on the vaccine budget and procurement. A week after the Senate hearings, Cha-cha discourse has mellowed if not stopped, giving the impression that it was a diversionary tactic to deflect public attention from big vaccine procurement one year before the big elections in 2022.

Any Cha-cha attempt should focus only in one direction — to keep the Constitution as short as possible.

Perhaps 10 pages maximum with no details, like the 60-40 equity for foreign and domestic investors, the minimum age of those running for Congress, Senate, and President, etc. All the details should be done by legislation. The Constitution should focus on the bill of rights of the people, to limit the powers of government, especially Congress, on what subjects they cannot legislate.

Secretary of National Defense Delfin Lorenzana unilaterally abrogated the Department of National Defense-University of the Philippines (DND-UP) accord of 1989 where military forces can enter UP only after coordination with UP officials. This is simple government to government coordination work and the DND is not justified to simply abrogate the agreement for the DND’s anti-insurgency, anti-Communist Party of the Philippines-National People’s Army (CPP-NPA) efforts.

Two things stand out here. One, the DND’s mandate is external defense, not the internal police work of running after local insurgents, and yet the DND seems gung-ho on duplicating what the Philippine National Police (PNP) should do. Two, the DND-Armed Forces of the Philippines (AFP) plus the police have huge budgets yearly. The combined AFP and PNP budget share to total budget net of interest payment was 14.2% in 2000, 14.5% in 2010, and 11.6% in 2019 (see Table 2).

Posted by Bienvenido Oplas Jr at 9:30 AM